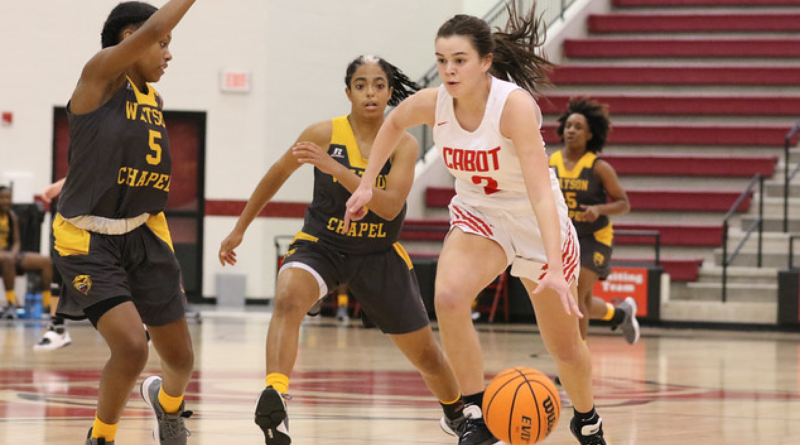 Over the next few weeks, SBLive Arkansas will break down every 6A boys and girls basketball team in the state entering the 2020-21 season. Here’s our look at the Cabot Panthers girls.

Conference record: 10-4 (tied for second place in 6A Central)

Madar was a quality backup guard a season ago who is now stepping into a starting role. “And she’s doing a good job with that,” Cook said. “But it’s just like any other inexperienced kid, there’s going to be some growing pains. But Molly is a high, high character kid and one that you love going to battle with.”

The Panthers’ lone returning starter, Theobald improved her game in all areas over the summer. She has signed to play college basketball at Harding University. “Last year she was probably pigeon-holed as a spot-up shooter and she has really worked on expanding her game, doing more off the dribble and creating for others,” Cook said.

Ringgold is an excellent defender who also received some varsity action last season off the bench. “She is a strong kid, tough as nails,” Cook said. “We’re going to rely on her for some of those same things as we did last year.”

Cyr logged plenty of varsity minutes a season ago and can play multiple positions offensively. “We expect her to give us some production from the shooting guard and small forward position,” Cook said. “She has started off the season really well.”

Reese is a sophomore who is primarily being used as a power forward for the Panthers. “She’s athletic, strong and skilled for that position,” Cook said. “She has a chance to be a really special player here in the next couple of years.”

Siegler is a solid two-way interior threat who received time with the varsity team last season. “She gives us a size presence in the post defensively and a scoring threat on the offensive end,” Cook said.

Dolan was a backup in Cabot’s two-post system last season and has remained in that role as a senior with the Panthers transitioning to more of a four-guard lineup. “So, she’s coming off the bench again backing up Paige, and she gives us a physical presence in the post,” Cook said.

“We lost six seniors and three college players, but having said that, we also had a large, large junior class who are now seniors that we expect to lead us,” Cook said. “The issue at this point is not age, but a lack of experience.”

Theobald is the only Panther with starting experience at the varsity level. Along with the above-mentioned players, junior Sidney Fewell, sophomores Baylee Beaver and Carly Madar and freshman twins Jenna and Jaycie Cook — daughters of coach Cook — also have been pressed into action as the Panthers have been hit with early-season COVID-19 quarantine issues.

“We’re trying to find the right balance between hoping kids become productive, and allowing our young players to develop,” coach Cook said. “But in our league, sometimes that is a bad combination.”

Cabot undoubtedly will take a step back this winter, but there are reasons for optimism. The Panthers have a brutal nonconference slate which should prepare them for the rigors of 6A Central play. Come January, the inexperienced group will be more prepared to tangle with the conference’s top teams.

“People will probably only relate the success or failure of this team to wins and losses, and that’s going to be a mistake with this group because of our schedule. The last three weeks, even with kids out, this team has really, really improved, but we haven’t won a game. It’s all relative. What is the goal here? In high school athletics, I think the goal is to do the best you can, improve every day. You want to see the kids get rewarded the way they want to, but the reality is there is a lot of success in just getting better every day.” — Jay Cook