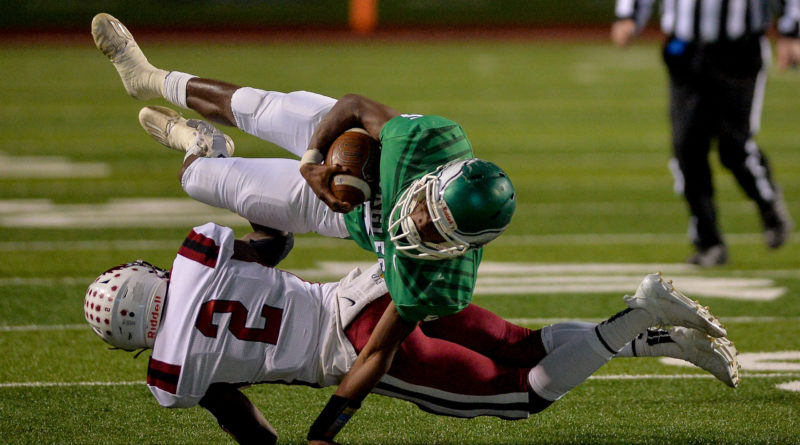 Here is an inside look at this weekend’s 4A and 3A Arkansas high school football championship games.

Last meeting: The teams have not met since at least 2004.

About the Saints: Shiloh Christian made its way back into the state championship game for the second consecutive year by sprinting past Stuttgart 56-7. Junior Kaden Henley blocked two punts, and senior LB Braden Tutt returned a fumble 63 yards for a touchdown during a first-half onslaught that saw Shiloh Christian leading 56-0 at halftime. The Saints have won seven state titles, their last coming during a three-year championship run from 2008-10. They lost last year’s final to Robinson, and since a Sept. 18 loss to eventual Oklahoma 6A quarterfinalist Sand Springs, have ripped off 11 consecutive wins by a combined score of 536-141. Quarterback Eli Wisdom, a sophomore who took over as starter in September, has thrown for 2,175 yards and 25 touchdowns and rushed for 1,359 yards and 21 TDs. Senior RB Cam Wiedemann, who scored four touchdowns last week, has rushed for 1,071 yards and 23 TDs and caught 36 passes (four TDs) for 467 yards. Henley leads the team with 149 tackles (23 for loss).

About the Colts: Rivercrest got past Warren 55-35 in its semifinal to reach the championship game for the 10th time in program history and the first time since winning the 2017 title (its third overall). The Colts won their first conference championship since 2012 with a high-powered offense that averages 47.9 points per game. They trailed Warren 35-34 in the fourth quarter before rallying behind WR Keshawn Scott, who moved to quarterback after starter Kam Turner suffered an ankle injury with about four minutes left in the third quarter. Scott did not complete a pass, but his 62-yard rushing touchdown early in the fourth put the Colts ahead to stay. Jaden Stovall later ran for scores that put the game away. Turner is a dual-threat speedster whose presence will be critical for the Colts’ title hopes. He has thrown for 2,873 yards and 37 touchdowns and run for 1,761 yards and 24 TDs. Scott is second on the team in rushing (642 yards, nine TDs) and leads the team with 70 catches for 1,361 yards and 18 touchdowns. Junior LB Mike Sharp leads the team with 80 tackles (12 for loss) but missed the semifinal game with an injury. In his absence, junior LB Tra Jones had 16 tackles to move into second place on the team with 79 (18 for loss). Junior DE Brandyn Brownlee had 14 tackles against Warren and this season has 74 (team-high 21 for loss and 4½ sacks). Junior Clay Burks has four interceptions and 10 pass breakups.

Last meeting: Harding Academy won 62-36 in the 2019 3A state quarterfinals en route to winning the championship.

About the Wildcats: Harding Academy earned the chance to become the first 3A school to win consecutive championships since Charleston (2013-14) with a 35-7 victory over Glen Rose last week. The Wildcats, who won their seventh title last fall, won their 26th in a row against state rivals, with their only loss this season in Week 4 to Briarcrest Christian of Eads, Tenn. Harding Academy led 14-0 at halftime last week before scoring on its first three possessions of the second half to put the game away. Senior QB Caden Sipe starred against Glen Rose both with his arm (22 of 27, 226 yards, TD) and his legs (career-high 106 yards, two TDs on 13 carries). He’s completed more than 75 percent of his passes (198 of 263) for 2,686 yards and 24 touchdowns with just four interceptions. His favorite target is senior WR Ty Dugger (69-1,031-11), but four other receivers have caught between 29 and 35 passes. Junior RB Andrew Miller has run for 1,261 yards and 26 TDs and caught 30 passes for 352 yards and seven TDs. Junior DL Eli Wallis (80 tackles, six for loss) and senior LB Jeffrey Mercer (72 tackles, six for loss) lead a defense that has allowed 11.4 points per game to Arkansas foes.

About the Owls: McGehee slipped past an opponent in consecutive weeks to advance to its first championship game since winning the last of its seven titles in 1999. This time, the Owls shook off five turnovers and a fourth-quarter deficit on a muddy, rain-soaked field to defeat Hoxie 20-18. Coach Marcus Haddock was on the 1999 team’s staff and took over as head coach in 2008. Senior quarterback Jordan Owens was 11 of 17 for 227 yards and two touchdowns, including a 37-yard strike to A.J. Jordan 37 seconds into the final quarter for the go-ahead score. The Owls made a fourth-down stop with 56 seconds left at midfield to secure the victory. McGehee won its first outright conference championship since 2011 this fall and has allowed a 3A-leading 10.1 points per game. Junior DB Jody Easter leads Class 3A with nine interceptions.