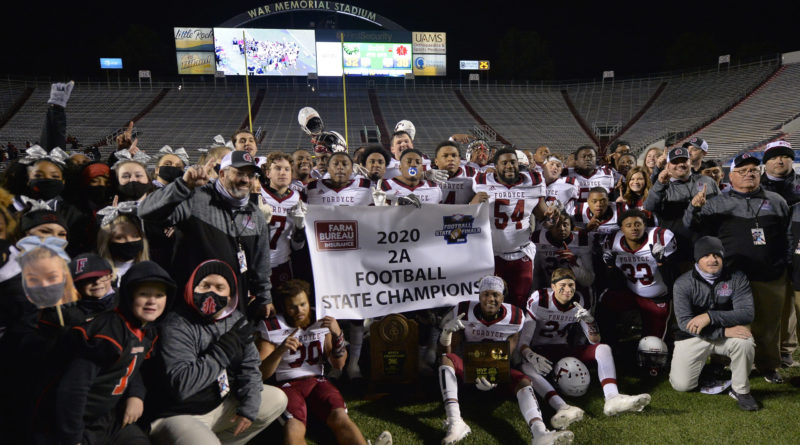 LITTLE ROCK — Fordyce senior Ja’Quez Cross paced a potent Fordyce running attack that pushed the Redbugs to a 35-32 victory over Des Arc on Saturday night in the Class 2A state final at War Memorial Stadium.

“It feels real good to come out here and play with my team and be able to do this again this year,” Cross said. “We have a great group of guys. I turned 18 yesterday, so it’s a great feeling to get out here and do it for my team and the community and the kids.”

Classmate Gary Lewis added 11 rushes for 108 yards and two scores. The Redbugs ran for 355 yards and passed for seven.

“Gary Lewis ran the ball great today,” Cross said. “That was our plan coming in. If the spread isn’t working, and we can’t throw the ball, we feel like we can out-power the other team.”

“I just thanked the Lord that we got to play,” Rodgers said. “The main thing every week was I prayed that we would get to play every week.”

After Eyan Holloway’s short run and a two-point conversion cut the Fordyce advantage to 28-20 at the end of the period, Cross extended the lead. He was in the midst of a 41-yard touchdown run when the ball was stripped. He picked up the ball in stride and was credited with an 18-yard fumble return which made the score 35-20 with 10:28 to play.

“I had mixed emotions because I was happy, but I was upset with myself because I normally don’t make simple mistakes like that,” Cross said. “I am grateful the ball came back my way, and I got to get in the end zone.”

Des Arc scored twice more and trailed 35-32 with 13 seconds left but couldn’t recover an onside kick, and Fordyce ran out the clock.

“I can’t be prouder with how our guys fought tonight,” Eagles coach BJ Paschal said. “We played a really, really good Fordyce team tonight, and they outmatched us everywhere on the field.

“I am just proud of them. The toughest part of the end of the football season is you have to say goodbye to your seniors. I just can’t be prouder (of) how they fought back in the second half tonight.”

Paschal said he was especially proud of senior quarterback Luke Morton, who dislocated his elbow in a playoff win against Junction City. Morton, who passed for 102 yards and a touchdown and ran for 47 yards Saturday, played with a large, padded brace on his arm.

“That’s one of the best, hard-nosed kids I have seen since I’ve been coaching,” Rodgers said. “I went over there and talked to him and looked at that elbow and all of that stuff he had on it. He said it hurt. It had to be. I’ve had popped-out joints, but to play the way he did tonight with that injury, he’s got to be tough.”

Fordyce owned a 21-12 halftime advantage thanks to a potent, quick-hitting running game with three touchdowns that went for 30 yards or more.

Cross ran for 113 yards and a touchdown in the first half; Lewis ran for 89 yards and two scores.

Cross ripped off a 41-yard score to give Fordyce a 7-0 lead with 7:11 to go in the first quarter. Des Arc’s Trevion Reed cut the deficit to one when he scampered 20 yards for a touchdown, but the two-point try was no good with 1:54 to play in the first.

Lewis scored his first touchdown of the half on a 43-yard run around the end, and the Redbugs led 14-6 with 8:23 remaining in the first half.

Des Arc cut into the lead again when Holloway, who rushed for 102 yards and two touchdowns, scored on a seven-yard run which capped a 10-play, 51-yard drive.

Lewis completed the first-half scoring with a 30-yard dash to put Fordyce up by nine at the break.

“The Lord blessed us and allowed us to finish the season,” Rodgers said. “I’m glad it is over with, all of the stuff we had to go through to get here and everything we had to do. I just thank the Lord every day that we got to play.”