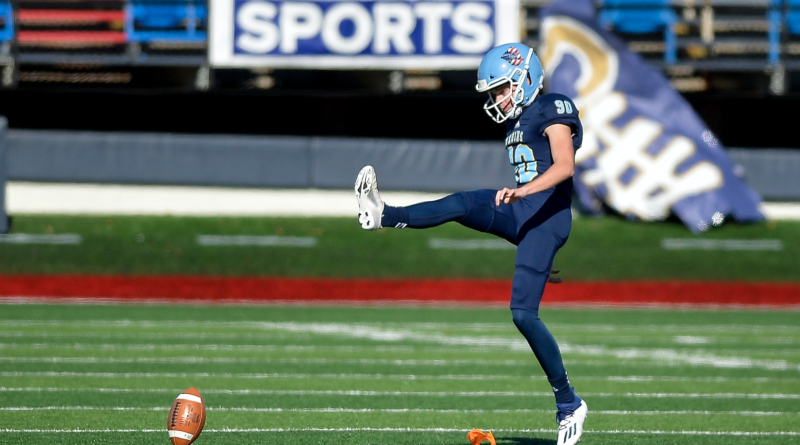 The Bruins used four onside kicks in the first half to fuel a 29-point halftime lead over Little Rock Christian as they cruised to a 64-27 victory in the Class 5A state championship game at War Memorial Stadium.

“We set aside practice to work on (onside kicks) every day, and to get four is unbelievable.”

The Bruins have garnered national attention for head coach Kevin Kelley’s philosophy of onside kicking after every score and never punting regardless of where the ball is on the field.

When I visit with people who ask about Kelley’s unconventional approach, I tell them about that September night in Cabot in 2011 when the Bruins were up 29-0 before the Panthers even had the ball. Pulaski Academy scored on its first possession — and then scored three more times after three consecutive onside kicks.

A year earlier, Cabot did a good job of fielding the onside kicks and won at PA. Cabot, a traditional football power in the state’s largest classification, was humbled the next year in front of 8,000 fans. The Panthers supporters didn’t know what hit them.

What makes that story even better is I was running late for that game, and I passed the PA bus as traffic was slow on Highway 67/167 coming north from Little Rock. Apparently, the Bruins had stretched and done some pregame work at their campus before traveling to Cabot, but it looked like they’d basically hopped off the bus and just took it to the Panthers.

Fast forward to Saturday, when I felt a little déjà vu. After PA went up 8-0 with 7:22 left in the first quarter, the Bruins’ Futa Shinkawa recovered Vaughn Seelicke’s onside offering which spun side-to-side. Three plays later, PA scored to go up 16-0.

Shinkawa also recovered the opening kickoff, but PA was unable to score on its first possession (just one of two they didn’t convert on during the first half) when Little Rock Christian’s Corey Platt stripped Jalyn Witcher deep in Warriors territory following a 32-yard catch.

Little Rock Christian trailed 23-13 at the end of the first quarter, and PA extended its lead to 30-13 when quarterback Charlie Fiser hit Witcher for a seven-yard touchdown pass.

On the ensuing kickoff, Ben Smiley recovered Seelicke’s two-hopper, and the Bruins’ margin grew when Nolen Bruffett connected with Cooper White on a 23-yard touchdown on fourth-and-five.

White wasn’t done, recovering the ensuing onside kick and setting the stage for PA’s final score of the half — a 14-yard Himon romp.

“All we want is a chance, and then we have got guys on (the kickoff team) that want the ball. They know what it means.”

What it means is PA wins. The Bruins, who have won six titles in the past seven years, are 136-5 when they recover an onside kick. They’re 59-1 when recovering two, and Kelley said they haven’t lost when recovering three or more.

“When you get two onside kicks, you are going to win all of your games,” Kelley said.

On Saturday, the onside kicks befuddled the Warriors — who have played PA six times in the past three years — even more than the Bruins’ high-octane passing game, which torched the Warriors for 458 yards.

“(The onside kicks) are huge and our defense didn’t even need to go out there much early,” Kelley said. “I think we caught (the PA defense) off guard, and we were a little cold when we got out there.

“Little Rock Christian is a great team, and for us to be able to do that to them means even more to me. Not because it’s them, but because they are a well-coached team and disciplined and knew what they were going to see, and we were able to do it anyway.”

Over the years, PA has developed several variations of the kick. Seelicke seems especially adept at kicking the ball while it lays on its side and spinning it wildly to the opposition. My favorite is when two kickers are in the game and each approaches the ball at the last minute — one moves and the other squibs the kick.

“It is not easy,” Kelley said. “If it was easy, everybody would be doing it, I promise you. I am willing to experiment and have an open mind about things. We will be out there, and I will literally practice kicking them myself — and I am not a good kicker — but if you can get the ball in the right spot, you can make it do different things, so we focus on that and how it’s going to land and pop.”