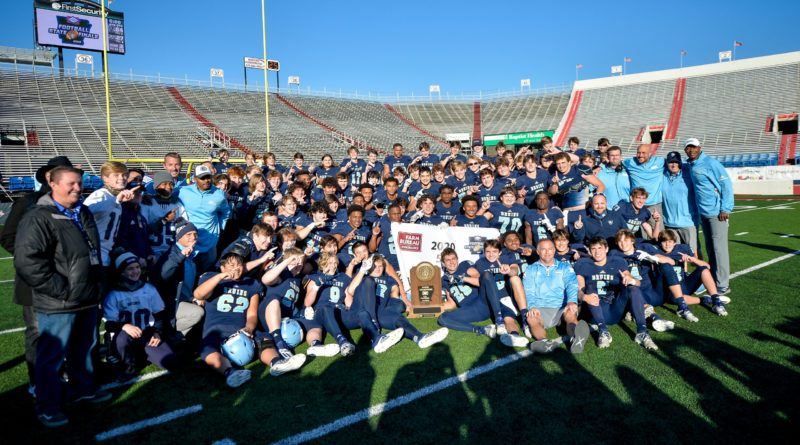 The Bruins won their ninth state title — all with Kelley at the helm — with a 64-27 win over rival Little Rock Christian for the Class 5A state championship Saturday afternoon in front of 3,719 fans at War Memorial Stadium.

Pulaski Academy (13-0) finished a perfect season. The program’s nine state titles are one behind Greenwood’s record 10 championships in the modern playoff era that began in 1968.

The title also is Kelley’s ninth, the most for any head coach in the playoff era and one behind the legendary Wilson Matthews, who won 10 from 1947 through 1957 at Little Rock High and Central.

The game also marked the third straight year the two private schools met in the Class 5A final, with Pulaski Academy winning the past two.

Kelley is renowned for never punting and almost always onside kicking after scoring. He was even called ‘probably the top high school coach in the country’ two weeks ago in a press conference by New England Patriots head coach Bill Belichick.

Kelley also recorded a first with two quarterbacks throwing for more than 2,000 yards in a season.

Senior Nolen Bruffett earned the start for the Bruins on Saturday and threw for 271 yards and three touchdowns to finish with 2,140 yards and 24 scoring passes for the season.

Junior Charlie Fiser, the starter most of the season, added 180 yards and two scores to finish with 2,900 yards and 41 touchdown passes.

“Me and Charlie feed off each other,” Bruffett said. “We are competing, but we’re for the betterment of the team. It doesn’t matter if I’m on the sideline handing out water or throwing the whole game — as long as we win, I’m happy.”

Saturday, though, it was all about the onside kicks for the Bruins.

Pulaski Academy recovered four of five onside kicks in the first half and scored off three of them for a 43-13 lead at the break.

“They’ll probably change the rules after that,” Kelley said. “We started doing it because it’s a weapon, looking at field position and analytics.

The Bruins did lose a fumble on their opening possession after recovering an onside kick to start the game but scored on Bruffett’s 9-yard pass to Cooper White with 7:22 left in the first quarter and Joe Himon’s 42-yard catch from Fiser with 6:42 left in the opening period.

Bruffett added a two-point pass to Dylan Allison after the first one, and Himon added a run to convert the second for a 16-0 lead.

Pulaski Academy, though, went on a three-touchdown spree in the second quarter behind more onside kicks.

Pulaski Academy received the second-half kickoff and needed 10 seconds to apply the Arkansas Activities Association’s Sportsmanship Rule, which runs the clock continuously with a 35-point second-half lead, on Bruffett’s 54-yard pass to Witcher. Vaughn Seelicke, the kicker successful on those onside kicks, added the extra point for a 50-13 lead.

“Vaughn did a great job on the onside kicks,” Kelley said. “It’s been spotty this year, but on the big stage, he did it.”

Eli Cooper caught a 29-yard pass from Colin Cooper for Little Rick Christian to cut Pulaski Academy’s lead to 57-20 with 3:16 left in the period.

Izarius Wood scored on a 4-yard run for Pulaski Academy’s final touchdown with 9:00 left in the game, and Isaiah Hankins caught a 7-yard pass from Colin Cooper for Little Rock Christian to set the final score.

Himon was named the game’s Most Valuable Player after rushing for 74 yards and three touchdowns and snaring six passes for 120 yards and a score.

“I’ve been playing hard with the help of my teammates,” Himon said. “This win was a big one for me. To be a part of this legacy is very special.”

Pulaski Academy finished with 579 yards of offense and 27 first downs.

Thanks to the onside kicks and extra possession, the Bruins had 49 offensive plays in the first half for 435 yards compared with 29 plays and 167 yards for Little Rock Christian.

“You can’t win a big game and lose the turnover battle,” said Little Rock Christian head coach Eric Cohu. “The recipe for success against them is recovering the onside kicks. We lost four of them early in the game and got behind the eight-ball and never recovered.”

In 2018, when Little Rock Christian beat Pulaski Academy both during the regular season and for the state championship, the Warriors recovered every single onside kick.