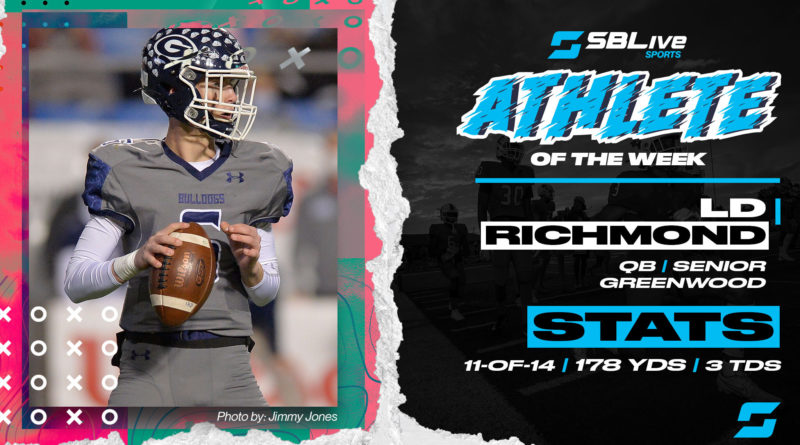 Richmond was 11 of 14 for 178 yards and three touchdowns to lead the Bulldogs to the 6A title over Lake Hamilton.

We are currently accepting Athlete of the Week nominations for the week of Dec. 7-13. If you would like to nominate an athlete, please email regan@scorebooklive.com or tag us on Twitter or Instagram at @sbliveark.

And here are the other athletes who were nominated for Nov. 30 – Dec 6:

Kam Turner, Rivercrest QB: Turner ran for 151 yards and four touchdowns and passed for a score. On defense, he had an interception and returned a fumble 95 yards for a touchdown.

Caden Sipe, Harding Academy QB: Sipe was extremely efficient, going 12 of 13 for 237 yards and three touchdowns in a win over Booneville.

Andrew Miller, Harding Academy RB: Miller had a huge night for the Wildcats, rushing for 195 yards and five touchdowns. He caught three passes for 51 yards.

Daylon Powell, Hoxie QB: Powell did his damage on the ground Friday, rushing for 290 yards and four touchdowns against Paris.

Davie Powell, Hoxie RB: Powell made the most of his three carries, finishing with 115 yards and two touchdowns.

Hunter Wilkinson, Greenwood RB: Wilkinson did his part in the Bulldogs’ 49-24 win over Lake Hamilton on Saturday, rushing for 148 yards and three touchdowns.

Trent Singleton, Lake Hamilton DB: Singleton had 15 tackles and a forced fumble in the Wolves’ loss to Greenwood in the 6A final.

Joseph Himon, Pulaski Academy RB: Himon showcased his ability rushing and receiving Friday. He caught 13 passes for 208 yards and a touchdown and rushed for 110 yards and two scores.

Charlie Fiser, Pulaski Academy QB: Fiser was 23 of 32 for 302 yards and three touchdowns Friday to lead the Bruins to a 52-14 win over Wynne.