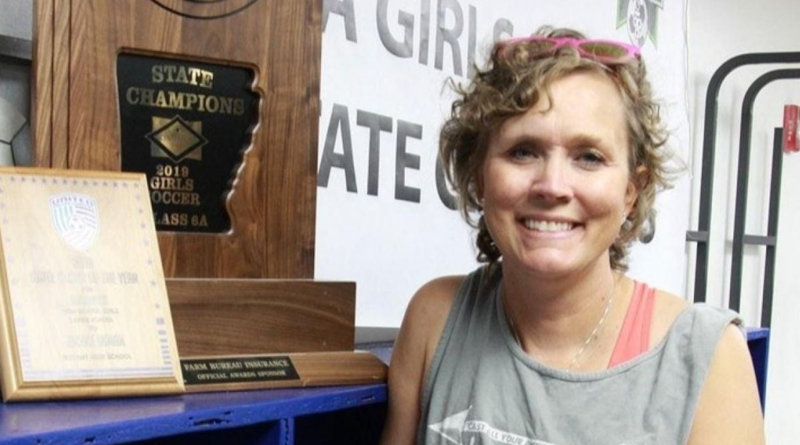 All you need to know about Nicole Inman — all she cared about you knowing — happened on that field at the University of Arkansas when she took a knee.

Actually, she took two knees. After Bryant won the 2019 Class 6A girls soccer championship, and everyone else raced onto the field to celebrate, Inman dropped to the ground and prayed. It was the devout Christian’s way of giving thanks to God and making it known to all in attendance.

“I think that was her in a nutshell. Her faith in God was before athletics,” said Bryant football coach Buck James. “Her faith resonated in everything she did. We spent countless hours visiting, her counseling me and me counseling her. She was as kind of a woman as I have been around. She was direct in what she wanted and that resonated with her kids and her faith exuded (from her).

“The coaching business lost a great one.”

Inman was a longtime club soccer coach and active in the local Bryant soccer scene, coaching her children and volunteering with the Central Arkansas Soccer Club. In 2018, she accepted the varsity head coaching job and a teaching position at Bryant High School.

Shortly after leading the Hornets to the 2018 state title game, Inman was diagnosed with two brain tumors. She coached the 2019 season while battling the tumors, and Bryant won the state championship by avenging a regular-season loss to Conway.

The Hornets would have been favored to repeat in 2020, but COVID-19 canceled the season after just a few games.

Inman’s condition worsened in the summer and fall as she was confined to a wheelchair. A few weeks ago, she entered hospice care.

A small group at the school was alerted Friday that the end was near.

“She was in the back of my mind the entire day at the game,” Bryant principal Todd Edwards said. “It kind of put a damper on the day, but it was good to know she’s no longer suffering. I hope her family finds peace in that. She has a wonderful family.”

Inman leaves behind her husband of 21 years, Scott, a longtime employee at KATV, first as a weekend sports anchor and later as lead news anchor. Until this year he had been a fixture on the Arkansas Razorbacks Sports Network football broadcasts, serving as a pregame host. He also did play-by-play for Arkansas PBS’s coverage of the high school football and basketball state championships last year.

Inman’s oldest son, Garrett, is a student at the University of Central Arkansas, and twin daughters Ashton and Abbey are seniors at Bryant and stars on the soccer team. Both will attend Ouachita Baptist University on soccer scholarships. The youngest of the family is son Nathan, who is in elementary school.

Bryant athletic director Mike Lee said Inman was an attractive candidate for the varsity position because of her club coaching experience and ties to the Bryant soccer scene, even though she didn’t have any high school coaching or teaching experience.

“She was really heavily involved in the club scene, and that’s where she earned a reputation as an outstanding soccer coach,” Lee said. “Everyone I talked to about Nicole, it was very obvious she was a kid attractor. Kids gravitated to her style of practice templates and game management. That reverberated as I vetted her. The other part was she was so involved in Bryant kids that she knew the kids that were here and the ones that were coming, and she knew the parents. That was huge.”

As luck would have it, the teaching position that was open at the time was film production. Inman studied broadcasting at Quincy (Illinois) College, where she also played soccer and met Scott while working at the local television station where he was the sports anchor.

Edwards said Inman worked in the spring and summer to get certified and that a letter was sent to the Arkansas Department of Education chronicling her broadcasting experience, which aided the process of attaining her nontraditional teaching licensure.

During a nine-minute video posted to Instagram the day of her passing, Garrett Inman said he took his mom’s class his senior year. He said she was learning along with her students and was excited to “show her Mac to me” with a video editing project she had completed.

“She was so intelligent, and it wasn’t just the soccer girls she connected with,” Edwards said. “She built relationships with all of the kids, and they won’t forget her. She did a great job.”

Coaching soccer was the easy part, even when she was diagnosed with two brain tumors after suffering a seizure just weeks after guiding Bryant to the 2018 state final.

The Hornets enjoyed a magical run the following year, and the state championship game was Inman’s last hurrah with the squad.

“What I remember about soccer practice is it kept (Inman) going — that and her faith and Scott and the kids,” Lee said. “I know soccer practice was the highlight of her day. She looked so forward to being out there, and she struggled with memory loss, but not on the soccer field.

“She might have had trouble with personal and school stuff but never on the soccer field. She was the same girl out there she was the year before, which gave me hope she was whipping this thing.”

Edwards said part of this week has been spent comforting the Bryant soccer players. He said the entire community is hurting.

Lee and ex-Hornets coach Julie Parker, now an assistant principal at the school, met with the team. First-year assistant Olivia Allard will serve as interim coach in the spring. Former longtime assistant coach Lawrence Jefferson will return to the program to aid Allard after serving as an assistant varsity track coach.

James and Inman were neighbors and quickly established a kinship. Both were coaches at high levels and shared a Christian faith.

He said he was “heartbroken” after his team’s big win Saturday when he found out Inman had passed. He said her legacy will be all of the players and kids she touched through soccer and school who “will grow up to be outstanding adults because of her influence.”

“I have only been on this earth for 57 years, but in my lifetime, I have seen that God takes the good ones,” James said. “He has His own agenda, and He gets people that can help Him and brings them home early, and that’s what He did with Nicole. Her faith was uncommon, and she didn’t just talk it, but she lived it. She walked on feathers and carried a sledgehammer. She fought cancer so hard, and I never saw her waiver.

“She is one of the most impressive people I have met in the coaching profession. She’s going to be dearly missed, but I know I learned a lot from just listening to her and her message that rang home with me. She touched so many other people that feel the same way I do. I hope we all get a chance to see her again.”