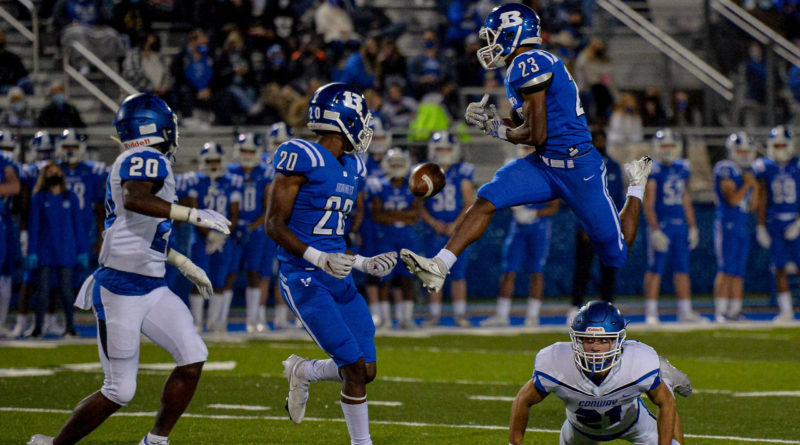 Here is an inside look at the top high school football games across the state of Arkansas in the fourth week of the AAA state playoffs (Dec. 4-5).

Last meeting: Bryant won 58-21 at North Little Rock on Oct. 30 — the fourth consecutive victory in the series for the Hornets. Included in that streak are victories in the 2018 and 2019 7A finals for Bryant’s first two state championships. North Little Rock handed Bryant its last defeat, winning 34-28 in Week 9 of the 2018 season.

About the Charging Wildcats: North Little Rock’s only loss this season came in Week 9 to Bryant. The Charging Wildcats since have won four in a row — including a 49-42 semifinal victory over Cabot — to reach the 7A title game for the fifth consecutive year (their last championship came in 2017). Three-year starting QB Kareame Cotton ran for the winning touchdown from 32 yards with 17 seconds left to beat Cabot. His score capped a game in which he threw for 366 yards and three touchdowns and ran for 87 yards and three TDs. Top back Fredrick O’Donald returned from an ankle injury that caused him to miss the previous two games to run for 90 yards on 17 carries.

About the Hornets: The two-time defending 7A state champions romped to a 29th consecutive victory since that 2018 Week 9 loss to North Little Rock, defeating Conway 56-14 in the semifinals. A win Saturday would make Bryant the first school to three-peat in Arkansas’ top division since Pine Bluff from 1993-95. Senior WR Hayden Schrader owns the program’s single-season records for receiving yards (1,424) and touchdowns (20). Senior QB Austin Ledbetter, who signed with Arkansas to play baseball, has thrown for 2,926 yards and 42 touchdowns with just five interceptions, and senior RB Tanner Anderson is 31 yards shy of 1,000 for the season.

Last meeting: Greenwood won 38-28 on Nov. 6 to secure the 6A West championship. The Bulldogs have won each of the past five meetings since 2016.

About the Wolves: Lake Hamilton’s only loss was to Greenwood 38-28 in the regular-season finale that decided the 6A West champion. The Wolves earned the rematch by edging Sylvan Hills 21-20 in overtime, stopping Tavion Cunningham on a two-point conversion run to secure their first berth in the state final since 2011. Their 1-2 backfield duo of juniors Tevin Woodley and Owen Miller again led the way, with Woodley running for 104 yards and two touchdowns, including a five-yard scoring run in overtime, and Miller adding 74 yards on 21 carries. Woodley (1,835 yards, 21 TDs) and Miller (1,723 yards, 21 TDs rushing) account for almost 77 percent of Lake Hamilton’s total offense. Senior linebacker Izaiah Clenney leads the team with 144 tackles (15 for loss, four sacks), and junior safety Ethan Watson has four interceptions, four forced fumbles and 11 pass breakups.

About the Bulldogs: Greenwood has romped through its schedule this fall, outscoring opponents by almost a 3-to-1 margin (532-170) and making it back to the title game after a one-year absence. The Bulldogs, a nine-time champion who won state titles in 2017 and 2018, routed upstart Marion 51-7 to reach the final for the 14th time since 1996. Senior QB L.D. Richmond, who missed the second half of their quarterfinal win over Mountain Home because of injury, returned to power the offense, completing 15 of 21 passes for 184 yards and three TDs and running for 65 yards and three scores. Senior RB Hunter Wilkinson (135 yards on 26 carries against Marion) went over 1,600 yards for the season in the victory.

5A Semifinals | 5A Bracket

About the Warriors: Little Rock Christian rolled to a 52-14 victory over Lakeside in the quarterfinals, with junior Jayvean Dyer-Jones running for 126 yards and two touchdowns on 14 carries to go over 1,100 yards for the season. The Warriors, who average 45.8 points per game, reached the semifinals for the third consecutive year — they won the title in 2018. Senior QB Colin Cooper has passed for 1,586 yards and 21 TDs and rushed for 575 yards and nine TDs, with Tulane commit Corey Platt Jr. his favorite target (38 catches for 626 yards and 13 TDs). Junior Slate Wilkerson (76 tackles, eight for loss) and senior Anthony Pugh (58 tackles, 14 for loss) lead the defense.

About the Goblins: A second consecutive last-second victory, this time 38-35 over White Hall, lifted Harrison into the semifinals for the second time in the past three years. Senior Cole Keylon threw a TD pass to junior Cy Madden with 40.6 seconds left for the winning score against White Hall. Keylon has battled through injuries this fall to throw for 2,432 yards and 27 TDs and run for 1,067 yards and 15 TDs. Senior Noah Moix has caught 30 passes for 972 yards and 13 TDs. Junior Dylan Block has 26 catches for 454 yards and three scores and has made 67 tackles and four interceptions on defense.

Last meeting: Pulaski Academy won 55-16 in the 2016 5A state championship game during its run of four consecutive titles.

About the Yellowjackets: Wynne continued its bid to win its first state championship since 2004 (fifth all-time) with a 28-0 quarterfinal victory over Arkansas. The Yellowjackets posted their third shutout of the season and have outscored opponents 403-117 this year. They used a backbreaking 18-second stretch to put away the game, with quarterback Marterius Ross scoring on an eight-yard run with 4:35 to play followed by Timmy Watson returning a fumble 20 yards for the final margin. Senior offensive lineman Terry Wells, rated the state’s top recruit by Rivals and 247Sports, is a University of Arkansas commit.

About the Bruins: Pulaski Academy remains on track for back-to-back state titles and a ninth overall after romping past Magnolia 53-29 in the quarterfinals. The Bruins have won 20 in a row and haven’t lost to an in-state public school since the 2013 state quarterfinals. Junior Joseph Himon II, the No. 8 recruit in the Class of 2022 according to 247Sports, ran for 204 yards and two TDs against Magnolia, giving him 1,893 yards and 20 touchdowns this season. Junior Charlie Fiser (2,517 yards, 36 TDs) and senior Nolen Bruffett (1,711 yards, 19 TDs) share quarterbacking duties, with five receivers catching 50 or more passes, led by seniors Jalyn Witcher (73-1,110-9) and Cooper White (58-1,261-16). Senior safety Josiah Johnson has a team-high 145 tackles, and linebacker Futa Shinkawa has 14 tackles for loss (110 total).

4A Quarterfinals | 4A Bracket

Last meeting: Stuttgart won 28-7 in the 2012 4A state championship game to earn the last of the Ricebirds’ seven titles.

About the Hillbillies: Ozark booked its third consecutive trip to the quarterfinals with a 40-14 victory over Pocahontas in the second round. Senior quarterback Harper Faulkenberry ran for a career-high 274 yards and four touchdowns on 28 carries and completed 6 of 8 passes for 98 yards and a score. For the season, he’s run for 1,563 yards and 25 TDs and thrown for 963 yards and six TDs. Senior Keystan Durning leads the team with 120 tackles, and junior Ryker Martin has 91 tackles (14 for loss, six sacks). Junior Brock Burns, a 6-4, 275-pound guard, has committed to Kansas.

About the Ricebirds: Stuttgart is in the quarterfinals one year after finishing 1-9, dethroning 2019 champion Joe T. Robinson 23-20 in the second round by erasing a 20-10 deficit in the final eight minutes. Jack Hosman kicked a 23-yard field goal with 1:08 remaining to put the Ricebirds ahead, and the Senators missed a potential game-tying 40-yard field goal on the final play. Sophomore Cedric Hawkins ran for 149 yards on 17 carries for Stuttgart, which took advantage of a blocked punt by Kameron Harper and recovering a botched snap to set up short fields for its two touchdowns.

3A Quarterfinals | 3A Bracket

About the Owls: McGehee won its first outright conference championship since 2011 on the strength of its defense, which was on full display in a 42-7 second-round victory over Lincoln. The Owls give up a 3A-best 6.4 points per game, outscoring their opponents 388-64. They scored in all three phases against Lincoln, getting a Jody Easter 57-yard punt return for a touchdown and an end-zone fumble recovery by Christian White. If the Owls reach the final, they will give coach Marcus Haddock 100 career victories, all at McGehee.

About the Wolves: While their opponent relies on defense, the Wolves feature 3A’s top offense, averaging more than 52 points per game as they seek a fifth semifinal trip in the past six seasons. They hit that mark in a 52-16 second-round victory over Melbourne, with quarterback Jacobi Nolen throwing for two touchdowns and running for a third. Jacaylon Zachery caught both TD passes and ran for a touchdown, and Jaylen Hopson ran for a touchdown and returned a kickoff 82 yards for the final score. Junior cornerback Omarion Dickens ranks among the state’s top recruits and sports an offer from Kansas.

2A Semifinals | 2A Bracket

Last meeting: Junction City won 46-14 in the 2019 2A state quarterfinals. The Dragons have won all five of their previous meetings, all in the playoffs.

About the Dragons: Junction City won its seventh in a row and reached the semifinals for the 16th time in the past 20 seasons with a 48-38 victory over Poyen last week. The Dragons have won seven titles, including four during the previous decade (2012, 2013, 2014, 2018). They had two running backs reach the century mark in their quarterfinal victory, with junior Jamal Johnson going over 200 yards for the second week in a row (251 yards and four TDs on 18 carries) and junior A.J. Ivory rushing for 106 yards and two touchdowns on 10 carries.

About the Eagles: Des Arc reached 10 wins for the first time since 2016 with a 38-22 victory over Bigelow. The Eagles, who boast one of the class’ top running attacks, rushed for 407 yards in the victory, with sophomore Jack Kearby gaining 146 yards. Senior quarterback Luke Morton dislocated his left elbow in the victory, and his status for Friday’s game is doubtful.

Last meeting: This is the first meeting between the teams since at least 2004.

About the Redbugs: The defending state champions breezed into the semifinals with a 47-8 romp over Foreman. Before last year’s title run, Fordyce hadn’t reached the semifinals since 2000. The Redbugs have outscored their 2A opponents 507-81 and have a plus-22 turnover margin (38-16). Senior DB Ja’Quez Cross, a Purdue commit, has seven interceptions and leads the team in rushing (810 yards, 19 TDs) and receiving (33 catches for 754 yards and nine touchdowns). Quarterback Jaheim Brown has thrown for 1,769 yards (completing 67.4 percent of his passes) and 25 touchdowns.

About the Go-Devils: After going 30 years without a semifinal appearance, Gurdon reached the semis for the second year in a row by beating East Poinsett County 53-6 in last week’s quarterfinals. Since a Week 1 loss to 3A quarterfinalist Prescott, the Go-Devils have outscored opponents 408-115. Senior RB Jameson Threadgill has run for 1,304 yards and 23 touchdowns. Senior LB Armando Harper leads the team with 69 tackles (three for loss).