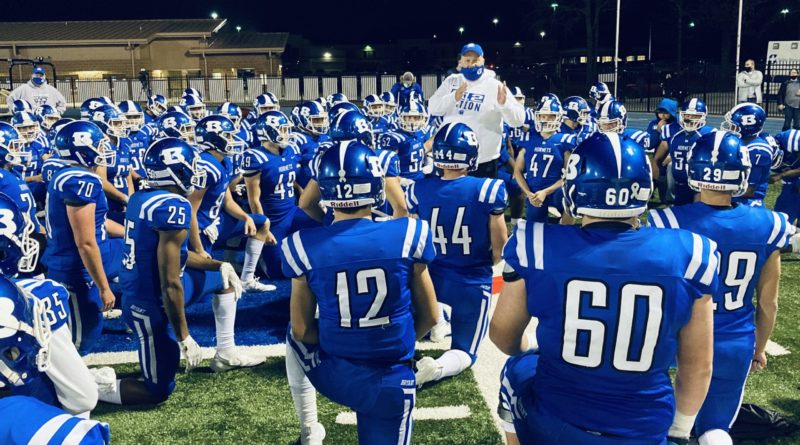 The Bryant seniors have done plenty of celebrating in three years at Hornet Stadium. The Hornets enjoyed one more victory party Friday night as they capped a perfect career home playoff streak with a dominant 56-14 win against Conway in the Class 7A state semifinals.

“We focused on (the streak all week) and made it a priority that this one wouldn’t be the first one we lost,” said tight end Hayden Schrader, who caught two touchdown passes in Friday night’s romp.

Bryant hadn’t been deeper than the semifinal round before the 2018 team won two playoff games at home to advance to the school’s first title game and claimed the state championship. The Hornets won two home playoff games in 2019 on the way to an undefeated season and three more this year as they enter next week’s state final on a 29-game win streak.

“That is a big achievement, especially for the seniors,” linebacker Hart Penfield said. “We lost two games in our whole career and only one of them has been at home. This place is our home, and we defend it well.”

“That loss to Fayetteville haunted us all that year, and then we beat them in the playoffs. (The playoff win streak) motivates us,” said Schrader, who broke the program’s single-season receiving touchdown record with his 19th TD catch Friday night.

“People before us built this, and we just got to keep on carrying on their legacy.”

Schrader said protecting the home field has been mentioned often over the past three seasons.

“We knew everybody was going to be coming out to get us, and we have a bullseye on our back every game,” Schrader said. “That was a motivation for us 100 percent to keep winning here.”

This season was particularly important to the seniors. It seemed like the only thing that might keep the Hornets from defending their title was the threat COVID-19 posed to the season.

Penfield, who intercepted a pass, recorded a sack and forced a fumble in the first half Friday, acknowledged he was worried the season could be canceled. He credits his teammates and coaching staff with taking the precautions needed “to stay healthy.” The success has added a sense of normalcy around Bryant.

“It’s just real special to be able to come out here every week and put on a show for the home crowd and give them something to smile about during these hard times of corona,” said running back Tanner Anderson, who added a touchdown run in the first half.

Many of the seniors played significant roles on the 2018 championship team as sophomores, including star quarterback Austin Ledbetter. Ledbetter saw his playing time increase throughout that season, and he was key in Bryant knocking off North Little Rock in the 2018 title game.

As a senior, Ledbetter has emerged as the state’s premier player.

“We came in here as sophomores and contributed,” Penfield said. “We had a lot on our table, and we had some guys that had to step up, and I think that got us ready to play in big games like this.”

Now, the seniors have just one hurdle left to cement their legacy. Conference rival North Little Rock awaits for the third year in a row next Saturday at noon at War Memorial Stadium.

“(Winning a third consecutive state title) would be awesome — it has never been done in Class 7A,” Schrader said. “It would be huge for this program and our guys.”