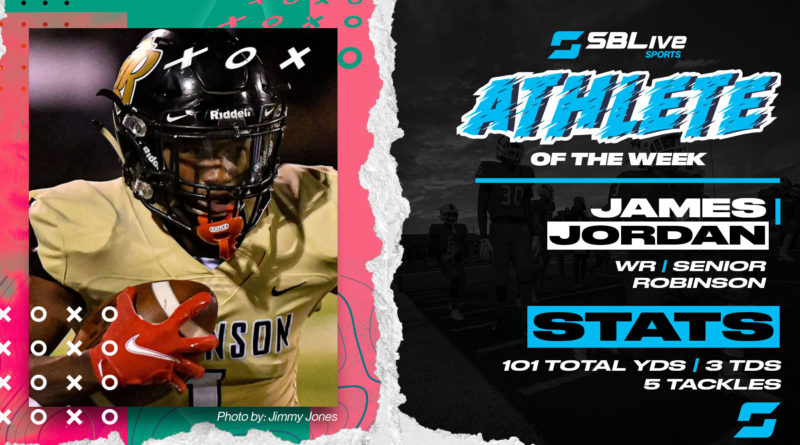 Jordan had 101 total yards, three touchdowns and five tackles, including one for a loss, in a 63-18 win over Mills.

Jordan received 48.96% of the vote, beating out Harrison RB Beck Jones, who finished with 48.44%. Rivercrest QB Kam Turner finished third with  0.71% and Robinson RB Hunter Smith was fourth with 0.64%.

We are currently accepting Athlete of the Week nominations for the week of Nov. 23-29. If you would like to nominate an athlete, please email regan@scorebooklive.com or tag us on Twitter or Instagram at @sbliveark.

And here are the other athletes who were nominated for Nov. 16-22:

Kylin James, Dumas RB: James ran for 253 yards had five touchdowns and an interception to help power the Bobcats to a 45-17 win over Bauxite.

Kam Turner, Rivercrest QB: Turner was his usual self, throwing for 214 yards and three touchdowns and adding 101 yards and a touchdown on the ground. He also returned a punt 74 yards for a touchdown in the 38-6 win.

Jaylan West, Rivercrest WR: West caught four passes for 113 yards and three touchdowns in the Colts’ win. He added three tackles and an interception on defense.

Tyler Gee, Cabot QB: Gee threw for 409 yards and three touchdowns to lead the Panthers to a huge win over Bentonville. He added 55 yards on the ground.

Cedric Simmons, Malvern QB: Simmons passed for 196 yards and three touchdowns and added 118 yards on the ground in Malvern’s win over Trumann.

Dante Reed, Malvern WR/DB: Reed caught eight passes for 143 yards on offense and had four tackles and an interception on defense.

Beck Jones, Harrison RB: Jones ran for 83 yards and scored all three touchdowns for the Goblins in their 21-14 win over Camden Fairview.

Jett Dennis, Greenland RB: Dennis ran for 190 yards and three touchdowns and added a 21-yard receiving touchdown in a win over Perryville.

Kaden Watts, Greenland DB: Watts had six tackles and two interceptions to help the Pirates advance in the playoffs.

Gary Lewis, Fordyce RB: Lewis carried only 10 times but made the most of it, finishing with 110 yards and three touchdowns in the Redbugs’ win over Clarendon.

Houston Bryant, Harmony Grove DE: Bryant had 11 tackles, a sack and a forced fumble in a four-point win over Piggott.