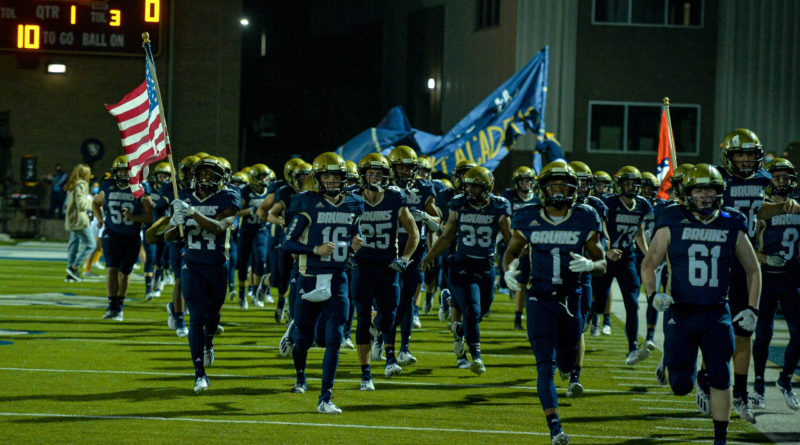 Here is an inside look at the top high school football games across the state of Arkansas in the third week of the AAA state playoffs (Nov. 27).

7A Semifinals | 7A Bracket

Last meeting: Bryant won 70-33 on Nov. 6 to clinch the outright 7A-Central Conference title. It was the sixth consecutive victory in the series for the Hornets.

About the Wampus Cats: Conway bounced back from its loss to Bryant with a couple of convincing playoff victories, beating Little Rock Central 49-20 last week to earn the rematch. Senior Jamaal Bethune ran for a season-high 276 yards and three touchdowns against the Tigers. Senior receiver Bryce Bohanan, who has committed to Tulane, has caught 17 touchdowns this year.

About the Hornets: The two-time defending 7A state champions romped to a 28th consecutive victory last week, defeating Har-Ber 48-22 in the quarterfinals. Since reaching the 7A semifinals for the first time in 2016, they have reached this round every year since. Senior quarterback Austin Ledbetter, who signed this month with Arkansas to play baseball, has thrown for 2,716 yards and 37 touchdowns, and senior Hayden Schrader’s 1,208 receiving yards reset the school record.

Last meeting: The Wildcats won 48-31 on Nov. 6 to finish second behind Bryant in the 7A-Central Conference standings.

About the Panthers: Cabot limped into the playoffs having lost three of four games to close the regular season. After routing Rogers in the first round, the Panthers shocked 7A-West champion and No. 2-ranked Bentonville 38-34, recovering a fumble near the goal line in the final minute to secure the come-from-behind victory and reach the semifinals for the first time since 2013. Senior QB Tyler Gee has thrown for 2,920 yards and 30 touchdowns, and senior receiver Kyler Carmack has 56 catches for 1,013 yards and 11 TDs.

About the Charging Wildcats: North Little Rock’s only loss this season came in Week 9 to Bryant. The Charging Wildcats have won three in a row since, including a 34-7 win over Little Rock Catholic to advance to the semifinals for a fifth consecutive year. Senior dual-threat QB Kareame Cotton has thrown for 1,575 yards and 15 touchdowns and run for 712 yards and 15 TDs. With top back Fredrick O’Donald out the past two weeks with an ankle injury, seniors Elijah Odem and Aaron Sims have split running back duties.

6A Semifinals | 6A Bracket

Last playoff meeting: The Bulldogs won 42-3 in the quarterfinals of the 2015 6A state playoffs.

About the Patriots: Marion won only twice during the regular season and scraped into the playoffs as the No. 6 seed from the 6A East. The Patriots benefited when Benton had to forfeit its first-round game because of COVID-19 quarantine, then defeated the West No. 7 seed Van Buren 55-34 to reach the semifinals for the first time since 2006. They hadn’t won a playoff game on the field in five years. Senior RB Brandon Mackey ran for a career-high 348 yards and four touchdowns on 19 carries and caught a touchdown pass against Van Buren.

About the Bulldogs: Greenwood has romped through its schedule this fall, outscoring opponents by almost a 3-to-1 margin (481-163) and reaching the semifinals for a sixth consecutive year with a 49-13 victory over Mountain Home. The Bulldogs won state titles in 2017 and 2018. They beat Mountain Home despite losing QB L.D. Richmond to injury early in the second quarter — his status for this week’s game is unknown, although sophomore Hunter Houston led Greenwood’s last five scoring drives against Mountain Home, going 11 of 12 for 182 yards and four TDs. Senior RB Hunter Wilkinson has run for nearly 1,500 yards this season.

Last playoff meeting: The Wolves won 14-7 in the first round of the 2019 6A state playoffs.

About the Wolves: Lake Hamilton’s only loss this season was to Greenwood, 38-28, in the regular-season finale that decided the 6A West champion. The Wolves have since gotten past Sheridan and El Dorado to reach the semifinals for the first since reaching the 2011 final. The Wolves rely on a punishing ground game led by juniors Tevin Woodley (1,731 yards, 19 TDs on 210 carries) and Owen Miller (1,649 yards, 20 TDs on 205 carries). Senior linebacker Izaiah Clenney leads the team with 126 tackles (13 for loss, four sacks).

About the Bears: Sylvan Hills started the season 0-2, and a loss to Marion left the Bears 2-3 under first-year coach Chris Hill. They then reeled off seven consecutive wins to make the semifinals for the second time in the past three years after their shocking run as a No. 6 seed in 2018. Hill installed the flexbone this year to positive effect, as Sylvan Hills won its first league title since 2004, posting its first nine-win season since 2016. D.J. Smith ran for 120 yards and the game’s only touchdown in the second quarter, and the Bears forced three turnovers to earn the victory last week against Parkview.

5A Quarterfinals | 5A Bracket

Last matchup: The teams have not met since at least 2004.

About the Razorbacks: Arkansas’ schedule might have been more affected than any other school’s in the state, losing half its games to COVID-19 quarantines. The Razorbacks won a play-in game against Alma to qualify for the state playoffs, then edged Morrilton 20-14 in the first round. Eric Flowers blocked a punt and recovered it in the end zone to build a 20-7 lead, then intercepted a pass with 58 seconds left to seal the victory. Torie Blair ran for 238 yards on 34 carries a week after gaining 207 yards and scoring twice in the victory over Alma.

About the Yellowjackets: Wynne, ranked No. 9 in the SBLive Top 20, is the favorite to win its first state championship since 2004 and fifth all-time. The Yellowjackets have outscored opponents 375-117. Allen Jones ran for two touchdowns, and Alonzo Holmes returned an interception 40 yards for a touchdown in Wynne’s 38-6 first-round victory over Maumelle. Senior offensive lineman Terry Wells is a University of Arkansas commit.

4A Second Round | 4A Bracket

Last meeting: The teams have not met since at least 2004.

About the Tigers: Prairie Grove finished second in 4A Region 1, losing only to top seed Shiloh Christian 42-28 in Springdale. The Tigers rallied with four fourth-quarter touchdowns last week to defeat Blytheville 59-34 in the first round. Foster Layman’s 6-yard run on the first play of the fourth quarter put Prairie Grove ahead for good, 38-34. Layman finished with 121 yards on 14 carries, and Cade Grant ran for 150 yards and a first-quarter touchdown on 19 carries.

About the Colts: Rivercrest won the 4A Region 3 title, winning every game by at least 17 points along the way, and pulled away for a 38-6 victory over Pottsville in the opening round. Quarterback Kam Turner has been a one-man wrecking machine for the Colts, throwing for 2,687 yards and 34 touchdowns and running for 1,230 yards and 16 TDs; at free safety, he has 57 tackles (11 for loss) and three interceptions. His top receiver is fellow senior Keshawn Scott, who’s caught 63 passes for 1,246 yards and 16 TDs.

3A Second Round | 3A Bracket

About the Greyhounds: Newport lost 31-7 to Harding Academy on Oct. 30 to finish second in 3A Region 2, then had a three-week layoff because of COVID-19 cancellations. The Greyhounds didn’t show any rust in a 47-0 rout of Corning in their first-round playoff matchup. Quarterback Dejai Marshal was 14 of 18 for 236 yards and five touchdowns, tossing two TD passes apiece to Isiah Kendall and Eli Alcorn.

About the Mustangs: Just two years ago, Hoxie finished with a losing record. This season, the Mustangs averaged more than 50 points per game in rolling to its first undefeated regular season since 2013. They defeated Lakeside 55-29 in their first-round matchup, with quarterback Daylon Powell running for 173 yards and four touchdowns and passing for two scores — all in the first half.

2A Quarterfinals | 2A Bracket

About the Eagles: Des Arc reached the nine-win plateau for the third consecutive season with a 40-22 victory over Mount Ida — a rematch of their nonconference game eight weeks ago, also won by the Eagles, 47-14, as part of their first undefeated regular season since 2008. The Eagles average 380 rushing yards per game and have a stingy defense that allows 13 points per game.

About the Panthers: A year ago, Bigelow went winless in 10 games on the field, earning a forfeit win after the season was over that second-year coach Luke Starks dismisses. The Panthers have followed this season by rolling through the regular season undefeated and earning their first playoff berth in six years. They romped to a 43-8 victory over Hampton last week, holding the Bulldogs to fewer than 50 yards rushing. Senior RB Brayden Jones leads the team with 938 rushing yards.