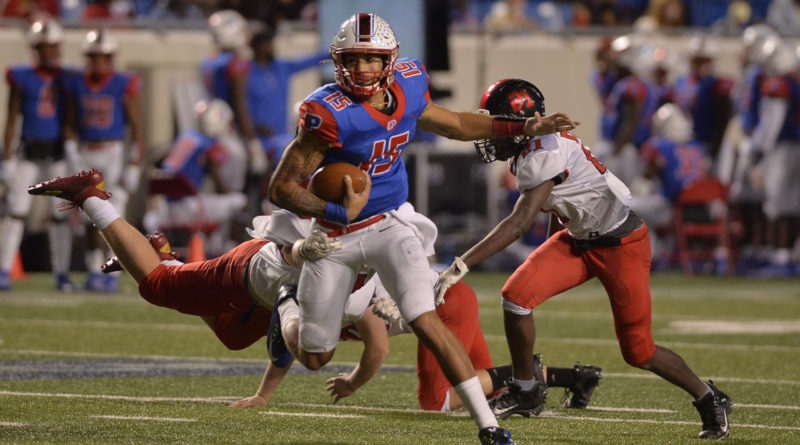 Here is an inside look at the top high school football games across the state of Arkansas in the second week of the AAA state playoffs (Nov. 20).

7A quarterfinal | 7A bracket

Last state playoff meeting: The teams met in the quarterfinals of the 2017 7A state playoffs, with the Tigers winning 31-6 en route to reaching the final.

About the Panthers: The Panthers, No. 8 in the final SBLive Power Rankings, bounced back after losing three of their final four games to close the regular season with a 48-14 first-round victory over Rogers. Running back Mason Bell went over 100 yards for the fourth time this season, rushing for 123 yards and three touchdowns as Cabot built a 41-7 halftime lead. Senior quarterback Tyler Gee, a Central Arkansas commit who’s thrown for 2,511 yards and 27 touchdowns, had a quiet night against Rogers (7 of 10, 196 yards, two TDs) but will need to step up if the Panthers are to pull the upset.

About the Tigers: The No. 2 Tigers received a first-round bye after Little Rock Southwest opted out of the playoffs. Bentonville rolled through the regular season, winning a fifth consecutive 7A-West championship while outscoring opponents 468-149. The Tigers have reached the state final only once since winning the last of their five titles in 2014.

6A quarterfinal | 6A bracket

Last state playoff meeting: This is the first playoff meeting between the schools since at least 2004. They last met Oct. 26, 2017, with Sylvan Hills winning 50-24.

About the Patriots: The Patriots, No. 11 in the final Power Rankings, are in the midst of their best season since 2009, the last year they finished with a winning record. They romped to a 42-7 first-round victory over Searcy, overcoming an early 7-0 deficit as senior quarterback Landon Rogers (an Arkansas commit) ran for 173 yards and five touchdowns.

About the Bears: The Bears look to make the semifinals for the second time in the past three years after their surprise run in 2018 as the East’s No. 6 seed. They trounced Russellville 54-19 in the first round last week as five players ran for touchdowns while building a 44-6 halftime lead.

6A quarterfinal | 6A bracket

Last state playoff meeting: This is the first playoff meeting between the teams since 2004. The teams met in Week 5 of the regular season, with Greenwood winning 40-7.

About the Bombers: That Mountain Home has reached the 6A state quarterfinals might qualify as the most surprising result of a crazy 2020 season. The Bombers were winless each of the previous two years and snapped a 23-game losing streak in Week 2. They hadn’t won a playoff game in 14 years before defeating Pine Bluff 24-20, erasing a 14-point third-quarter deficit. Logen Walker’s long kickoff return to the Zebras 11-yard line set up Gage Hershberger’s winning touchdown with 1:09 to play.

About the Bulldogs: No. 5 in the SBLive Power Rankings, Greenwood has been the most dominant team in 6A this season, outscoring opponents 432-150. In their Week 5 matchup, senior quarterback L.D. Richmond threw for three touchdowns and ran for two more as the Bulldogs built a 40-0 halftime lead.

5A first round | 5A bracket

About the Hornets: Maumelle has won four in a row since starting 2-2, including its first playoff win since 2014 — 19-7 over Nettleton. Senior Jaylon Smith went over 100 yards rushing for the third time this season, running for 113 yards and a touchdown, and Jonathan Reyes broke a 7-7 tie with a 10-yard touchdown pass to Dashaire Ford-Burton on the opening drive of the third quarter.

About the Yellowjackets: Wynne is used to making deep playoff runs but hasn’t reached the final since 2016. The Yellowjackets have allowed 11.1 points per game in going unbeaten but haven’t taken the field since Oct. 30 after their regular-season finale was a COVID-19 casualty and they had a bye during the play-in round.

4A first round | 4A bracket

Last state playoff meeting: The teams’ only previous meeting came in the first round of the 2016 4A playoffs, when Ozark won 23-22.

About the Panthers: Ashdown won a combined five games the previous two seasons since its last playoff appearance in 2017, when it reached the quarterfinals. In their regular-season finale, the Panthers edged Fountain Lake 14-12 to snap a two-game losing streak.

About the Hillbillies: Ozark hopes at least to match its playoff run of a year ago, when the Hillbillies made the 4A Final Four for the first time since reaching the 2012 final. They enter the playoffs on a three-game win streak spearheaded by dual-threat senior quarterback Harper Faulkenberry, who’s run for 1,085 yards and 18 touchdowns and thrown for 833 yards and five scores. Junior linebacker Ryker Martin has 12 tackles for loss and four sacks among his 82 tackles.