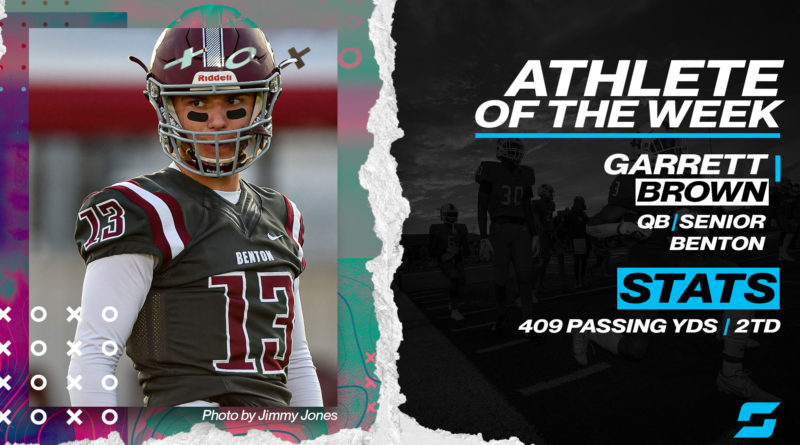 Brown received 50.99% of the vote, beating out Bentonville WR Cooper Smith, who finished with 24.64%. Morrilton DB Javion Ware finished third with 9.11% and Morrilton RB Jackson Moll was fourth with 4.49%.

We are currently accepting Athlete of the Week nominations for the week of Oct. 5-11. If you would like to nominate an athlete, please email regan@scorebooklive.com or tag us on Twitter or Instagram at @sbliveark.

Here are the other athletes who were nominated for Sept. 28 – Oct. 4:

Kam Turner, Rivercrest QB: Turner led the Colts to a blowout win over Cave City. He was 20 of 27 for 312 yards and five touchdowns.

Keshawn Scott, Rivercrest WR: Scott was a favorite target of Turner on Friday night. He caught five passes for 84 yards and three touchdowns.

Cole Keylon, Harrison QB: Keylon was very efficient as he helped lead the Goblins over Alma. He was 6 of 9 for 155 yards and three touchdowns. He ran for 44 yards and two more touchdowns.

LD Richmond, Greenwood QB: Despite playing only one half in the blowout win, Richmond was 14 of 19 for 296 yards and three touchdowns.

Devin Johnson, Hot Springs RB: Johnson carried the ball 28 times for 316 yards and two touchdowns in the win over Hope.

Javion Ware, Morrilton DB: Ware returned an interception 75 yards for a touchdown in the 48-13 win over Pea Ridge.

Jackson Moll, Morrilton RB: Moll was dominant on the ground, rushing for 248 yards and two touchdowns.

Cole Shoemaker, Central Arkansas Christian LB: Shoemaker was all over the field on defense, collecting 18 tackles, a sack and a fumble recovery.

Brandon Scott, Charleston QB: Scott showed his dual-threat ability in the 36-34 win over Cedarville. He was 11 of 15 for 113 yards and two touchdowns. He ran for 51 yards and a score.

Breckon Ketter, Charleston LB: Ketter had 12 tackles, returned a fumble for a touchdown and had a rushing touchdown to help the Tigers to a two-point win over Cedarville.