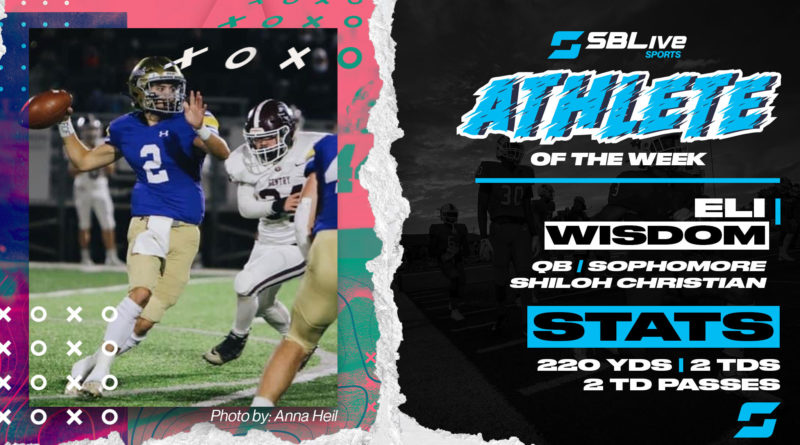 Wisdom had a huge rushing night, eclipsing the 220-yard mark and scoring twice. He added two touchdown passes in Shiloh Christian’s 49-28 win over Elkins on Oct. 23.

We are currently accepting Athlete of the Week nominations for the week of Oct. 26-Nov. 1. If you would like to nominate an athlete, please email regan@scorebooklive.com or tag us on Twitter or Instagram at @sbliveark.

Braden Jay, Cabot WR: Jay had five catches for 172 yards and a touchdown in Cabot’s loss to Bryant.

Tyler Williams, Central Arkansas Christian RB: Williams had 25 rushes for 165 yards and 3 TDs plus 2 catches for 40 yards and a TD against Lonoke.

Jabrae Shaw, Watson Chapel QB: Shaw did it all, passing for 203 yards and two touchdowns and adding 141 yards and three touchdowns on the ground.

Owen Miller, Lake Hamilton RB: Owen Miller led the way against Van Buren with 107 rushing yards and two touchdowns and was one of five players to score on the ground.

Justin Crutchmer, Lake Hamilton RB:Crutchmer had a 72-yard touchdown run and added 15 tackles, a sack and a forced fumble on defense.

Ty Hipps, Russellville LB: Hipps had 12 tackles and a sack in a loss to Little Rock Parkview.

Jacaylon Zachery, Prescott WR: Zachery made the most of his receptions, catching two passes for 91 yards and two touchdowns.

Buddy Gaston, Robinson QB: Gaston was extremely efficient for the Senators, going 11 of 15 for 187 yards and their three touchdowns against Bauxite.

Hunter Smith, Robinson RB: Smith had 104 total yards against Bauxite while scoring on the ground and through the air.

Dante Reed, Malvern WR: Reed had six catches for 75 yards in a win over Fountain Lake. He had an interception on defense.

Rykar Acebo, Jonesboro QB: Acebo was 26 of 40 for 275 yards and had three touchdowns in the win against Searcy.

Brady James, Lamar RB: James went over the 1,000 yard rushing mark in Friday’s win over Rivercrest. He carried 15 times for 269 yards and had five touchdowns.

Hayden Morton, Cedarville RB: Morton made the most of his five carries Friday, rushing for 113 yards and three touchdowns in the loss to Greenland.

Payne Lee, Subiaco Academy RB/LB: Lee had a huge night in Friday’s win over Spring Hill. He ran for 201 yards and four touchdowns while also leading the Trojans with 14 tackles.