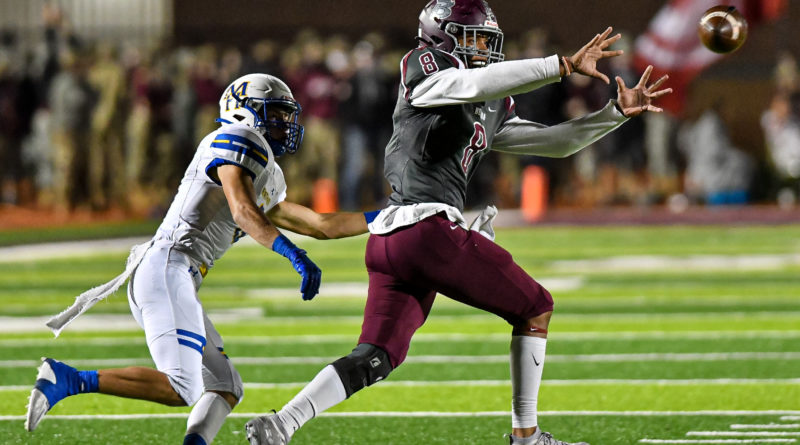 Here is an inside look at the top high school football games across the state of Arkansas this week (Oct. 23).

Shiloh Christian has been on fire since opening conference play, averaging 58 points per game during a 4-0 start. The Saints’ lone loss was by one point against Page (OK) in Week 3. They’ll welcome an undefeated Elkins team that has been equally dominant. The Elks’ average margin of victory is more than 40 points. They’re looking for their first win against Shiloh Christian in what will be their third all-time meeting.

Little Rock Christian took down Pulaski Academy in conference play last season before the Bruins got their payback with a 42-point win in the 5A state final. Both teams sit atop the 5A rankings again this year and face off this week in a battle that’s likely to decide the conference title. Pulaski’s two quarterbacks, Charlie Fiser and Nolen Bruffett, have combined for 32 touchdown passes, with 12 going to senior receiver Jalyn Witcher. Junior running back Joseph Himon has been excellent, averaging 10 yards per carry to go with 12 total touchdowns. The Warriors have been strong on offense, too, with the duo of Colin Cooper and Corey Platt Jr. connecting for seven touchdowns.

After a 1-2 start, Benton has turned the corner with four consecutive wins since the beginning of conference play. The Panthers offense was on full display in last week’s 35-7 win over Mountain Home. Senior quarterback Garrett Brown led the way with 409 passing yards and two touchdowns. They’ll have a tough test this week against Greenwood, which enters 6-0. The Bulldogs have scored 33 points in each game and have allowed more than 10 points once. Quarterback LD Richmond was on fire last week, throwing for five touchdowns and adding two more on the ground.

Rogers has seen its offense perform well in every game this season, with the team’s lone loss coming in overtime against Bentonville West two weeks ago. The Mountaineers will need to continue that trend this week against an undefeated Bentonville squad that is beating in-state opponents by an average of 38 points per game. The Tigers have allowed 27 points in four conference games and have solidified themselves as a top-three team in the state alongside Bryant and North Little Rock.

North Little Rock has won 10 of its past 12 games, with both losses coming against Bryant. The Charging Wildcats have kept pace this season as they look for revenge against the Hornets. North Little Rock has had a very consistent offense this season, having scored between 35 and 49 points in each of six contests. Next up for the Charging Wildcats is a battle against Fort Smith Northside, which they’ve beaten seven consecutive times. Northside’s two losses have come in conference road games, first against Bryant and most recently against Conway.

It won’t be an easy one for Cabot on Friday night. The Panthers are one of the state’s top teams, but Bryant has been on a whole different level this season. Cabot had a week off following a three-point loss to Conway and will need its offense and defense in top form this week. Quarterback Tyler Gee along with offensive weapons Braden Jay, Kyler Carmack and Mason Bell are sure to be up for the challenge as they look for their first win against Bryant since 2012. Bryant’s only single-digit win of the season came against Trinity Christian of Texas. The Hornets are coming off a 70-0 shutout of Little Rock Southwest as they ride a 24-game win streak and aim for a third consecutive 7A state championship.

Little Rock Central canceled, forcing Conway to find another Week 8 matchup. The Wampus Cats were able to set up a game against Christian Brothers and will travel to Memphis this Friday. Conway’s offense has been strong all season, even more so in the past two weeks as it’s put up 52 and 48 points, respectively, on conference opponents. The Purple Wave are 7-1 and have an explosive rushing attack that averages eight yards per carry. They’re led by junior running back Dallan Hayden, who’s averaging more than 225 yards per game to go with 18 rushing touchdowns. He has 25 offers from schools all over the country.

Arkadelphia returned from a four-week absence last week and didn’t skip a beat on the way to a 54-19 takedown of Harmony Grove. Senior quarterback Braeden Thomas had four touchdowns, two through the air and two on the ground. Ashdown started 5-0 before getting tripped up at Malvern two weeks ago. The Panthers were able to bounce back against Nashville last week thanks to two fourth-quarter touchdowns in a 26-24 victory.

Since losing to Wynne in its second conference game, Greene County Tech has bounced back with consecutive wins to solidify its position in the upper half of the 5A East standings. The Golden Eagles are a run-first team led by senior David Williams, who is closing in on the 1,000-yard mark for the season. Valley View had a three-game stretch early in the season during which it averaged 52 points per game but enters this game having lost two in a row and having seen a big drop in offensive production. The Blazers have six players with more than 100 rushing yards and will need to regain their old offensive form to move up the standings.

After a 2-0 start, Van Buren has dropped four of five. The Pointers made a late run against Little Rock Parkview but came up short, losing by eight. Their three conference losses have come by an average of seven points. Lake Hamilton remains unbeaten but received a scare against Russellville two weeks ago, winning by a point in overtime. The Wolves run the ball more than 90 percent of the time and do it quite well, averaging more than eight yards per carry as a team. Juniors Tevin Woodley and Owen Miller are the bell cows, having combined for nearly 1,900 yards and 21 touchdowns.