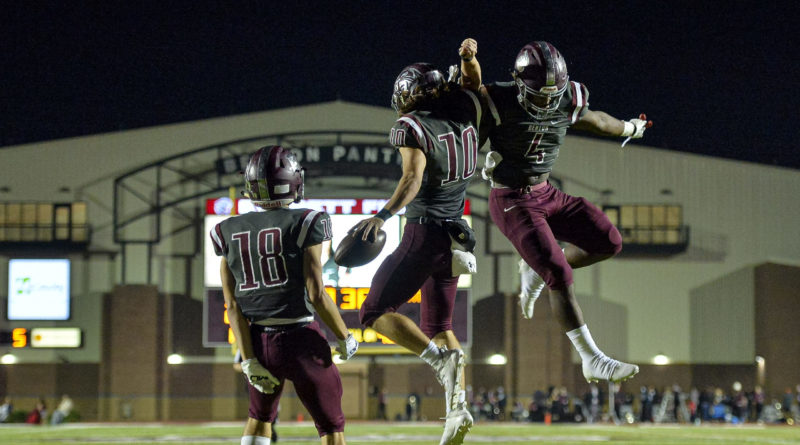 Here’s a look at some of the top performances in Week 8 (Oct. 16) of Arkansas high school football.

It was another big night for Turner and the Colts’ offense. He was 23 of 31 for 459 yards and five touchdowns. Turner also ran for two touchdowns and recorded 10 tackles on defense.

Scott posted a ridiculous stat line while on the receiving end of Kam Turner’s passes. He finished with 17 catches for 323 yards and four touchdowns and contributed eight tackles on defense.

Richmond had the passing attack working, finishing with 242 passing yards and five touchdowns, each to a different receiver. He added two rushing touchdowns.

Brown had 409 passing yards and two touchdowns to lead Benton to a 35-7 win over Mountain Home.

Jointer had 174 rushing yards and a touchdown to help lead the Patriots to a 28-20 win over Van Buren.

Burns caught eight passes for 120 yards and was on the receiving end of all three touchdown passes by quarterback Eli Shepherd.

Barnes grabbed an interception and returned it 80 yards for a touchdown in a loss to Robinson.

Miller had 171 rushing yards and three touchdowns while averaging more than 12 yards per carry.

Woodley had 197 rushing yards and a touchdown as Lake Hamilton took down Siloam Springs, 42-19.

Watson had five tackles, an interception and a forced fumble as the Wolves held Siloam Springs to 19 points.

In his first varsity start, Blanchard threw two touchdown passes and ran for another TD in Magnolia’s 52-33 win over Hot Springs.

Dennis rushed 12 times for 239 yards and three touchdowns in Greenland’s 35-7 win over Lavaca.

Johnson threw for 204 yards and four touchdowns on just 11 attempts — all in the first half — to lead Elkins to a 63-6 win over Green Forest.

Scott threw for 293 yards and three touchdowns and rushed for two more TDs to lead Charleston to a 48-8 win over Hackett.

Hamilton rushed 14 times for 171 and three touchdowns — including a 51-yard TD on the first play of the game — in Lake Hamilton’s 42-19 win over Siloam Springs.