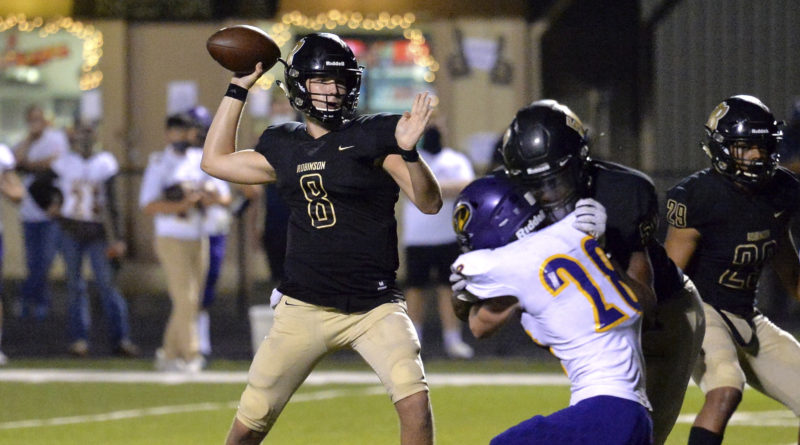 From North Little Rock QB Kareame Cotton to Searcy RB Daniel Perry, there were several standout performances across the state of Arkansas on Friday, Sept. 25.

Richmond totaled a whopping 266 receiving yards in a 47-35 victory over Clinton.

Kattich went for 148 yards and three touchdowns on the ground in a 46-14 rout of Lavaca.

Green ran for a ridiculous 327 yards in a 41-14 victory over Jacksonville.

Robinson got it done on both ends, finishing with three receiving TDs and an interception.

After the team struggled in the first half, Pulaski beat Watson Chapel 59-24 largely thanks to Himon’s 190 rushing yards, two rushing touchdowns, and 91-yard hook-and-ladder touchdown.

The sophomore QB recorded 200 passing yards, 34 rushing yards, three passing touchdowns and a rushing TD in the first half of a blowout victory over Bauxite.

Gee had three touchdown passes and added a rushing TD to lead Cabot to a 31-21 victory over LR Catholic.

Oliver led the defense with 12 tackles and an interception in Searcy’s 35-23 victory over Sheridan.

Perry erupted for 204 rushing yards, four rushing touchdowns and a passing touchdown (his only pass attempt of the season) for the Lions.

Richmond threw for 353 yards and a touchdown while completing a ridiculously efficient 29 of 35 passes. The Bulldogs also received big contributions from WR Caden Brown and RB Hunter Wilkinson in a 35-28 victory over Bentonville West.

Anderson rushed for 88 yards and three touchdowns in a 48-7 victory over Fort Smith Northside.

In addition to a great defensive performance in a 34-0 victory over Rogers Heritage, Springdale got 270 passing yards, two passing TDs and two rushing TDs from Phipps.

Turner went off in a 46-26 victory over Pocahontas, finishing with 177 passing yards, three passing TDs, 206 rushing yards and two rushing TDs. He also forced a fumble on defense. That makes three consecutive games with more than 200 rushing yards for Turner.

Dempsey had an unforgettable stat line against De Queen to lead Hope to its first win of the season. He totaled three interceptions, two of which he returned for touchdowns, and two rushing touchdowns.

Allen led the Jackrabbits to a 47-31 win over Heber Springs with 127 passing yards, a passing TD, 71 rushing yards and three rushing TDs.

Keylon led the Goblins to a 33-6 victory over Ozark with two passing touchdowns and a rushing touchdown in well under a full night of action.

Chronister gave it everything he could in a 35-28 victory over Pea Ridge. He broke the school single-game rushing record with room to spare, finishing with 281 yards.

Scott led Charleston to a surprisingly lopsided 48-18 beating of Greenville. He went for 123 yards both in the air and on the ground and finished with two passing TDs and a rushing TD.

Johnson led Benton to a 47-40 victory in a thriller over Russellville with 250 yards and two rushing touchdowns. QB Garrett Brown also set an all-time passing touchdown record for Benton (53) with two TDs in the effort.