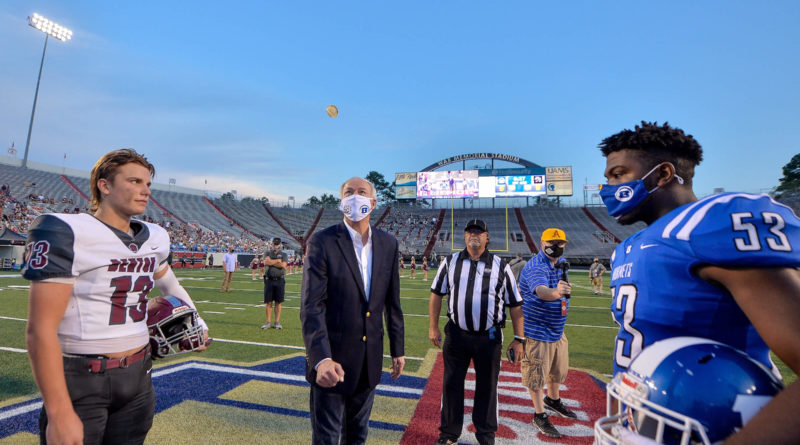 Here is an inside look at the top high school football games across the state of Arkansas this week (Sept. 25).

Camden Fairview had its offense clicking to start the season but saw things slow down a week ago in a 22-17 loss to Watson Chapel. The Cardinals’ strength continues to be their run game, with four different ball-carriers having scored at least three touchdowns. The team is averaging 7.3 yards per carry. Lakeside enters conference play having alternated wins and losses over the first four games. Like Fairview, the Rams have a loss to Watson Chapel on their resume. Quarterback Will Ross has nine touchdown passes, with four of those going to Logan White.

Clarendon is looking for a 4-0 start, which would match the program’s best since 2011. The Lions are averaging more than 55 points per game but will face a step up in competition against Fordyce, which has allowed 21 points per game in three wins. The Redbugs continue to be led by seniors Jaheim Brown and Ja’Quez Cross. Brown has thrown for 11 touchdowns, and Cross has scored seven on the ground and through the air. The duo has combined for five interceptions on defense.

Monticello’s perfect start ended last week with a one-point loss to Star City. The Billies have gotten strong play from quarterback Stran Smith and running back Keon Smith. Jalin Green and Riley Williams have three interceptions apiece. Star City bounced back from a loss to Stuttgart with a 31-point win over Hampton a week ago. The Bulldogs have defeated Monticello twice in a row but are facing a different Billies team as they start conference play.

Watson Chapel is 2-0 with both wins coming against quality teams, but it will be a different challenge opening conference play against Pulaski Academy. The Bruins are 3-0, with the past two wins coming against talented out-of-state opponents. Pulaski Academy hasn’t won fewer than 10 games since the 2009 season. After a breakthrough sophomore campaign with 1,300 rushing yards, Pulaski Academy running back Joe Himon is backing it up during his junior year. He’s closing in on the 500-yard mark and is averaging more than eight yards per carry.

Northside finished nonconference play with a 2-0 record and has the task of opening the conference season against nationally ranked Bryant. The Grizzlies defense has been strong and must continue that against the Hornets’ high-powered attack. Bryant has demonstrated an ability to attack in several ways. Quarterback Austin Ledbetter has nine touchdown passes, with five different players on the receiving end. Tanner Anderson leads the rushing attack and is one of four Hornets who have scored on the ground.

Maumelle enters conference play with wins sandwiched around a loss to Robinson. The Hornets have been run-heavy and have used big defensive lineman Nico Davillier to punch it in when close to the goal line. Little Rock Christian has played high-scoring contests in all three outings, losing a matchup against Magnolia two weeks ago. Arkansas State commit Corey Platt Jr. has been the star, with three touchdown receptions, three forced fumbles and two interceptions.

Har-Ber has had a tough start to the season, going 0-3 in nonconference play. The Wildcats have a chance to turn things around when they travel to Bentonville but must limit the turnovers, as fumbles and interceptions have plagued them. The Tigers will be home for the first time this season as they open conference play after one-possession wins in their past two games against out-of-state teams. They’ve defeated Har-Ber in three consecutive matchups.

After an early-week cancellation for both teams, Greenwood and Bentonville West will meet Friday for the first time. Greenwood started the season with two lopsided victories before a hard-fought win over Choctaw (Oklahoma) last week. The Wolverines have bounced back from their opening loss to Broken Arrow (Oklahoma) with two wins. They’ve had a week off to prepare, though they were expecting to face Fayetteville before the schedule change.

Cabot’s offense has gotten off to a scorching start in three wins, with Tyler Gee and Braden Jay leading the charge. Jay scored on the ground and through the air and returned a kickoff 92 yards for a touchdown in the Panthers’ win over El Dorado. Little Rock Catholic didn’t let an opening-week loss set the tone and has seen its offense put up back-to-back performances of 38 and 35 points. The Rockets have defeated Cabot in the past two meetings.