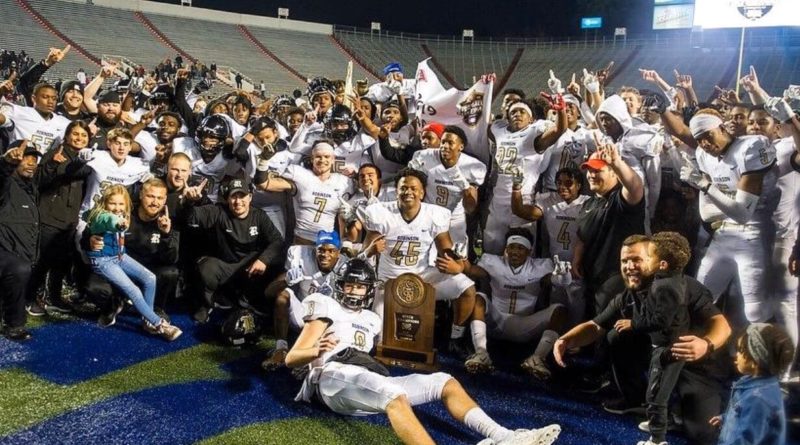 Last season, Robinson stormed its way to a 4A title in dominating fashion. They enter 2020 as the clear favorite to repeat, but there is a crowded field of big-time contenders and talented upstarts. Let’s take a look at the field.

Last season’s championship squad was somewhat senior-heavy, and even still, the Senators still are a heavy favorite on paper.

They bring what most call the state’s best QB/RB tandem with Buddy Gaston and Hunter Smith III returning as seniors. Gaston threw for nearly 3,000 yards last season and 44 touchdowns to eight interceptions. Smith, who has at least seven D-1 offers, rushed for 1,920 yards and 19 touchdowns on over 10 yards per carry. Despite having major holes to fill at receiver, their offense is sure to be explosive as long as those two are healthy.

And that’s not even including 3-star junior RB Daryl Searcy Jr, who rushed for 634 yards and seven touchdowns last year. Plus, many Arkansas gridiron fans are expecting a big breakout year for James Jordan, a star on defense who has also shown promise at WR. Lastly, Robinson has one of the state’s best O-lines, anchored by 4-star OT E’Marion Harris and another standout junior OL, Eli Jackson.

Robinson, which totaled a remarkable 272 tackles for loss last year, isn’t lacking talent on defense either. Deldrick “DJ” Withers, the state’s top-ranked DE, was good for 75 tackles, 32 TFLs, and eight sacks last season as a junior. A lot of the Senator’s offensive stars double as impact defenders – Harris is a force at DL, Smith is a standout SS, and Jordan had a very rare stat line for a DB with 79 tackles, 18 TFLs, two sacks, five picks, and three forced fumbles. LB Will Dardenne and DB Grant Jones also had strong 2019 campaigns.

The Saints were 14-0 until running into Robinson in the 2019 state title game, and are favored to make it back to the finals in 2020.

On offense, they have a lot of voids to replace in the passing game, such as a 4,000-yard QB, a 2,000-yard WR, and their next three top wide receivers. The good news: they still have one of the state’s best RBs, Cam Wiedemann. In addition to running for nearly 1,300 yards last season, he’s actually their leading returning receiver with 591 yards. Also on the bright side, Caleb Anderson and Kyle Cason both got in-game reps at QB last season, and the same can be said at WR for juniors Jacob Solomon, Ben Baker, and Cooper Hutchinson.

The Saints’ defense is quite young. Junior LB Kaden Henley led the team in tackles last season, but after him, there aren’t many full-time starters back. In order to make a run at the title, they’ll need a lot of non-seniors who saw limited action to step up in a hurry. However, coming off a season filled with blowout victories, the fact that Shiloh Christian got a lot of underclassmen into games bodes very well for their chances.

Last season, Ozark went 12-2, finishing with a great underdog run to the semifinals. This year, with much of that core returning, they are dangerous, and should no longer be looked at as a dark horse.

The offensive situation is complicated, although not for a lack of talented playmakers. Dual-threat QB Harper Faulkenberry threw for 922 yards on 62.5% completion, and ran for 1,192 yards and 12 touchdowns. When he got injured in the playoffs, LB and second-string QB Ryker Martin stepped in, and continued to lead the charge. Martin had racked up a good bit of rushing yardage in games before that, and was second on the team with 622, but didn’t attempt a pass until filling in for Faulkenberry.

To make matters more complicated, Ozark’s only returning receiving threat, Tyler Sanders, is more of a running back by trade than a receiver. He may spend his senior season focusing on his receiving game. Also returning at RB are juniors Duke Walker and Britton Gage and senior Braydon Shepherd.

Coach Jeremie Burns will again have his hands full making things work with so many more rushing threats than receiving threats – but it worked fine last year. Is there a way to play through both Faulkenberry and Martin? Either way, all parties involved are benefitted by a very strong O-line led by 3-star Kansas commit Brock Burns.

Finally, the Hillbillies’ are returning defensive talent across the board, with numerous aforementioned offensive threats doubling as impact defenders. With 150 tackles last season, LB Keystan Durning is the leading returning tackler in all of Arkansas. Also returning in their strong front seven are star DT Lawsyn Jackson, DE James Ellison, and Ryker Martin at LB. In the defensive backfield, Duke Walker in considered by some as one of the best junior safety prospects in the state. Ozark had a handful of guys splitting reps every game at DB last year, and Lane McClure, Sebastian Ross, and Tyler Sanders are a few who should be ready to take another step forward.

The Scrappers made the quarterfinals last season where they were the only team besides Robinson to keep it competitive against Shiloh Christian. While many key seniors are gone, there’s plenty of reason to believe they can build on 2019’s strong (11-2) showing.

They return a host of impact playmakers this season. Dual-threat QB Ty Gordon, an Arkansas State baseball commit, threw for nearly 1,400 yards last season and rushed for over 1,000. Nashville has one of the state’s better RBs in Keyshawn Stewart, who is not only a 1,000-yard rusher but also a receiving threat and their quarterback nearly 20% of the time. Pro-style QB Ethan Gunter also had some really nice reps last season as a sophomore and could possibly emerge as a bigger factor to allow Gordon and Stewart to focus on the running game.

Also returning on offense are all Nashville’s WRs except their first option. Expect more workload for De’vay Ragland, Isaiah Jones, and Dontrelle Robinson (who can also run the ball), among others. Additionally there’s standout OT Dalton Brown, who solely focused on blocking last year but could be a real threat at TE should Nashville opt to pass a bit more this season.

Nashville isn’t returning as much talent on defense as on offense, but there’s more than enough to work with. It starts with Will Pope, a hard-hitting safety at just 5-8, 135. He leads one of the division’s premier defensive backfields that also includes Dontrelle Robinson, Quincey Garland, and La’dainian Hendrix. If Nashville can fill major holes in their front seven, they have a shot to go deep into the playoffs.

Despite winning 14 games and a state title, Robinson actually lost a game last season, and it was against another 4A team – Arkadelphia, in the regular season. The Badgers didn’t get a playoff rematch since they lost by one point to a strong Crossett squad in the quarterfinals.

Their rush-heavy offense is now heavily dependent on versatile all-purpose back Braeden Thomas, who spent legitimate time at QB, RB, and SB/WR just about every single game last season. There aren’t many players out there putting up 413 passing yards, 657 rushing yards, and 343 receiving yards in a season, not to mention 130 returning yards in special teams. That makes him their leading returner in yardage in all three categories.

Most of the Badgers’ other playmakers last year were seniors, but there are three other returners who got significant reps last year – junior RB Braylon Bailey, junior WR Jaishon Davis, and senior WR Kyler Phifer. Davis is a 3-star recruit with an offer from Kansas, so he’s a safe bet to be ready for extensive usage. If those three and Thomas can pick up much more weight this season – with the biggest incumbent shoes to fill at running back – then Arkadelphia’s offense will be fine.

Last year, their senior-heavy defense was strong enough to keep them in every game they played in, with the apex being that 22-21 victory over Robinson. Arkadelphia will need new starters to show up and show out in order to stay at that level. Seniors Trey Bledsoe and Kalan Jones anchor the defensive backfield, and senior DL Elijah Wheeler will lead a very young front seven. DE Landon Kuhn looked good last year as a sophomore, although it was in very limited action.