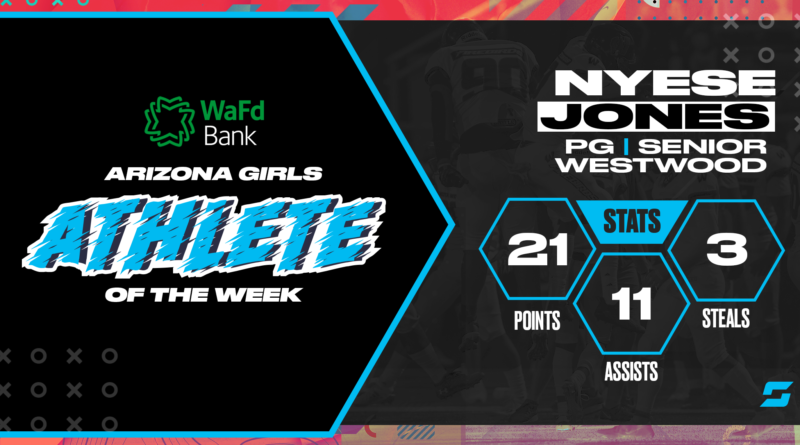 In Westwood’s 72-28 win over Palo Verde on Tuesday, the senior posted a double-double with 21 points and 11 assists. She also had three steals, six deflections and a rebound. Jones was named to the Flowing Wells Holiday Shootout All-Tournament team.

AJ Bonapart, Junior, Sahuaro – Lifting Sahuaro to a 59-51 win over Ironwood Ridge on Wednesday, Bonapart dropped a career-high 26 points while shooting 53 percent from the field. She also had three rebounds, three steals and an assist in the win. Bonapart was named to the Flowing Wells Holiday Shootout All-Tournament team.

Keyla Cervantes, Senior, St. John Paul II – Up against big competition in the 6A Boulder Creek Jaguars, Cervantes helped the 2A Lions come out with a huge 65-39 victory in tournament play. Posting 26 points and 10 rebounds for a double-double, she also had three steals in the game to help pick up the win. She followed it up on Wednesday against Phoenix Country Day by posting 28 points, 15 rebounds and two steals to help the Lions pick up a 63-57 win.

Steffy Cervantes, Junior, St. John Paul II – Joining her sister to dominate on the court, Steffy exploded to lead the game on Wednesday against Horizon, posting 28 points, seven rebounds, five steals and four assists. She closed things out for 2021 on Thursday in the 44-41 win over Deer Valley, posting a double-double with 23 points and 16 rebounds, along with three assists, a steal and a block.

Demetria Dosela, Freshman, Miami – The freshman continues to be on fire this season as she had another strong week of performances to close out 2021 in style. On Tuesday, she helped Miami defeat Round Valley 61-58 with a huge double-double, posting 28 points and 19 rebounds while shooting 60 percent on field goals. She also had six assists, four steals and two blocks in the win.

Shamara Goodwin, Senior, Alhambra – On Tuesday, Goodwin helped Alhambra pick up its first win of the season by defeating Camelback 55-43 in tournament play. Goodwin led the game in scoring with 17 points, and her 11 rebounds helped her notch a double-double. She also had three assists, a steal and a deflection. She followed it up Wednesday with another strong performance in a 49-31 victory over Carl Hayden. Goodwin had another double-double with 19 points and 19 rebounds, along with five steals and four assists, a block and a deflection.

Alyssa Heath, Senior, Mohave – Returning to the list once again this week is Heath, who helped Mohave to a 52-39 win over Basic High School out of Henderson, NV, on Tuesday in tournament play. Heath posted 24 points, six steals, five rebounds, three assists and a block in the victory.

Addy Herrera, Senior, Camp Verde – Helping lift Camp Verde to a 46-29 win over Ash Fork on Tuesday in tournament play, Herrera dropped 27 points while shooting 71 percent from the field for a career high. She also had five assists, four steals and three rebounds in the game.

Navine Mallon, Junior, Flowing Wells – Mallon had an outstanding performance at her team’s holiday tournament, landing herself a spot on the Flowing Wells Holiday Shootout All-Tournament team. In the championship game against Westwood, she led the game in scoring with 25 points to help the team bring home the trophy. She also had 12 rebounds, good for a double-double, along with an assist and a steal. In the semifinal game against Sunnyside on Tuesday, she had a double-double with 17 points and 12 rebounds, along with two steals. In the previous two games of the tournament, she dropped 16 points, 10 rebounds, three steals and a pair of assists and blocks against Desert Christian, and she had 15 points, 16 rebounds and three steals against Buena.

Acacia Melvin, Senior, Combs – Despite Combs’ 34-40 loss to Cienega on Wednesday, Melvin still had an outstanding game. She posted 21 of the team’s points, along with 15 rebounds and seven steals.

Sophia Munoz, Senior, Ironwood Ridge – On Wednesday, Munoz had an explosive game to help lift Ironwood Ridge to a blowout victory over Baboquivari. With 20 points, seven rebounds, five assists and two steals, the Night Hawks were able to cruise to a 78-23 win.

Nayeli Nidez-Acuna, Sophomore, Sunnyside – Posting a career-high 23 points Tuesday in the 61-43 win over Rincon/University, she also had eight rebounds, four steals and an assist to help the Blue Devils advance to the championship round of the Flowing Wells Tournament. Nidez-Acuna was also recognized as a member of the all-tournament team for her performance on the court.

Brianna Romero, Senior, Sunnyside – In Tuesday’s game against Rincon/University, Romero teamed up with Nidez-Acuna to absolutely dominate on the court. Romero also had a double-double, exploding for 22 points and 14 rebounds, along with two blocks, an assist and a steal in the 61-43 win.

Jayla Scott, Senior, Vista Grande – It was a solid week for Scott in tournament play, as she opened up the week against Benjamin Franklin by posting a double-double with 25 points and 18 rebounds, along with three blocks, in the 53-19 victory. On Wednesday, she helped Vista Grande defeat Chandler Prep in the team’s second game of the day with 23 points, 10 rebounds, five steals, four blocks and two assists. She rounded things out on Thursday in a 54-49 loss to Liberty with another double-double, dropping 20 points and 14 rebounds along with five blocks and a pair of assists and steals.

Samantha Sebastiani, Junior, Horizon – The junior had two of the best games of her high school career last week in tournament play. On Tuesday, she helped Horizon defeat Alchesay 50-41 by posting a career-high 25 points, along with six rebounds, two assists and a steal. She followed it up on Wednesday in the 50-42 win over Holbrook with a double-double, posting 22 points and 13 rebounds along with six blocks, three assists and two steals.