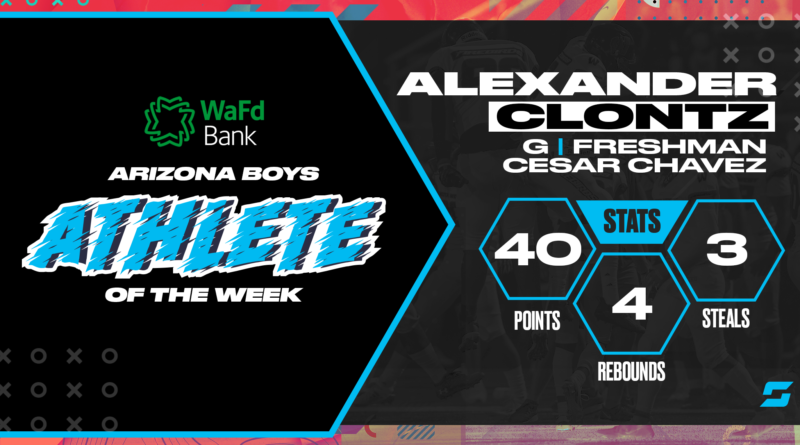 As only a freshman, Lex had a career-high 40 points on Tuesday in the 76-20 victory over Kofa while shooting 60 percent from the field. He also had four rebounds, three steals and two assists to help the Champions cruise to the win.

Clontz received 39.92% of the vote, beating out Shadow Ridge’s Luke Arlington who finished second with 25.3%. Saguaro’s Anders Mazick finished third with 13.26% and Apollo’s Ahamed Mohamed finished fourth with 11.06%. There were over 18,000 votes tallied this week!

Andy Allen, Senior, ALA-Ironwood – Shooting 76 percent from the field, Allen had 26 points and 15 rebounds despite his team’s 54-49 loss to Dysart on Monday in tournament play. On Wednesday, he helped the team pick up a 68-62 win over Moon Valley with 21 points, 15 rebounds, two blocks, a deflection, a steal and an assist.

Joven Allen, Junior, Desert Edge – With a solid all-around performance on Monday in the 95-28 rout of North Valley Christian, Allen posted 18 points while shooting an outstanding 89 percent from the field, along with seven rebounds, five assists, five steals and a block.

Andrew Camacho, Junior, Peoria – Despite Peoria’s 82-65 loss to Centennial on Tuesday, Camacho posted 30 points, seven rebounds and a pair of steals and deflections. In Wednesday’s 90-53 victory over Rincon/University, he had 38 points along with six assists, four steals, three deflections and two rebounds.

Rafe Canale, Senior, Sunrise Mountain – It was an explosive week for Canale, who finished things off with a bang on Thursday by dropping 42 points, seven rebounds, two assists and a steal in the 96-76 victory over Cactus. It came after a strong start to the week, where he averaged 23 points per game in the three days leading up to Thursday.

Marcus Coleman, Senior, Pueblo – Coleman started the week hot, dropping 25 points while shooting 67 percent from the field to help the Warriors pick up a 57-40 win over the Hayden Lobos in the Santa Cruz New Year Shootout. He followed it up later in the day in the game against NFL Yet Academy, dropping 16 points, eight rebounds, five deflections, three assists and two steals to walk away with a 73-36 win. On Wednesday against Palo Verde, he helped the Warriors fight to a 68-65 win with 28 points, six rebounds, five assists, five steals and three deflections.

Jacob Crotts, Senior, Marana – Helping Marana to a 72-53 victory over Show Low on Tuesday, Crotts posted a career-high 26 points along with three steals and a pair of blocks, rebounds and assists. On Wednesday, he had 25 points, a rebound, an assist and two steals in the 71-59 win over Thatcher, before rounding things out on Thursday with 24 points, five rebounds, four assists and two steals in the 76-64 win over ALA-Gilbert North.

Carter Gittens, Junior, Sunrise Mountain – Helping Sunrise Mountain to a 71-54 win over Youngker on Monday, Gittens had a double-double with 21 points and 16 rebounds. He followed it up on Wednesday with another outstanding performance alongside teammate Rafe Canale to help Sunrise Mountain pick up a 59-56 win over Pueblo. Gittens had 24 points, nine rebounds, three blocks and two assists in the win.

Matias Kroese, Senior, Tucson – In Tuesday’s 76-36 victory over Snowflake in tournament play, Kroese led the game in scoring with 22 points while shooting 73 percent from the field. He also had seven rebounds, three steals, three blocks and two assists in the win.

Jaylen Lee, Junior, Valley Christian – In Monday’s game against Prescott at the Judy Dixon Greenway Tournament, Lee helped lead Valley Christian to a 79-64 win with a solid overall performance on the court. With 19 points and 13 rebounds, he notched a double-double, along with four steals, three assets and a deflection.

Antonio Martinez, Senior, Palo Verde – Martinez had a strong week of play, helping Palo Verde pick up wins in three of its four games. Starting off on Monday in the 72-50 win over Alhambra, Martinez had 21 points, six rebounds, six assists and three steals. He followed it up later in the day against Apache Junction, dropping 30 points, eight steals, seven assists and a rebound in the win. On Tuesday in the 69-39 rout of Maryvale, he had 28 points, six assists, four steals and two rebounds, before rounding things out on Wednesday in the 68-65 loss to Pueblo with 21 points, eight rebounds, two steals and an assist.

Anders Mazick, Junior, Saguaro – In Wednesday’s game against Tempe, Mazick did a little of everything for the Sabercats with 17 points, 12 rebounds, an assist, a steal and two deflections to help the Sabercats pick up an 80-53 win.

Ahamed Mohamed, Senior, Apollo – Shooting 67 percent from the field, Mohamed dropped 37 points in the 86-66 victory over Liberty on Monday. He also had four rebounds, three steals, two blocks, two deflections and an assist. In Thursday’s 60-41 win over Ironwood, he led the game in scoring with 26 points, six rebounds, three assists and two steals.

Jason Parent, Senior, Prescott – In the Judy Dixon Greenway Tournament last week, Parent had a double-double on Tuesday with 28 points and 10 rebounds, along with five steals, two assists, two deflections and a block to help Prescott defeat Moon Valley 62-52. He followed it up on Wednesday in the 70-58 win over Thunderbird with 32 points, 11 rebounds, four deflections, three steals and two assists. Thursday, he rounded it out with 38 points, eight rebounds and five steals in the 65-63 loss to Dobson.

Luke Shaw, Sophomore, Valley Christian – With a career-high 29 points to accompany his six rebounds, his explosive performance helped the Trojans pick up an 82-56 win over Camp Verde in the Judy Dixon Greenway Tournament on Tuesday.