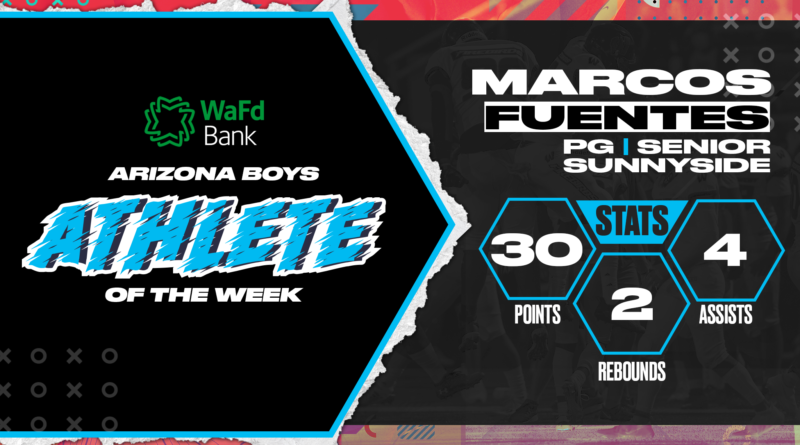 Helping Sunnyside to a 77-55 win over Lake Havasu in the Bullhead City Holiday Shootout, the senior led the game in scoring with 30 points on the night. He also had four assists, two rebounds, two steals and a deflection in the game.

Fuentes received 54.39% of the vote, beating out Coolidge’s Brayden Gant who finished second with 38.17%. Casa Grande’s Anthony Flores finished third with 5.64% and Shadow Ridge’s Luke Arington finished fourth with 1.04%. There were over 48,000 votes tallied this week!

Luke Arington, Senior, Shadow Ridge – Solidifying his role as one of the Stallions’ top players, Arington had another strong week. On Monday, he posted a double-double with 25 points and 10 rebounds, along with three steals, to help Shadow Ridge pick up a 75-24 victory over San Luis.

Nate Calmese, Senior, Mesquite – One point shy of tying his career high in scoring, Calmese dropped 38 points Tuesday in an 81-61 victory over Mountain View. He also had eight rebounds, three assists and a steal in the win. He then posted 32 points, four rebounds, four assists, three steals and a block to help Mesquite edge Regis Jesuit of Aurora, CO, in the Visit Mesa Tournament. He rounded things out against Corona del Sol on Thursday by dropping 35 points, three rebounds, three steals, three blocks and an assist to help Mesquite pick up a 68-43 win.

Marcus Coleman, Senior, Pueblo – Despite the Warriors’ 65-55 loss to the Poston Butte Broncos on Monday in the Central Arizona Holiday Classic, Coleman still posted 24 points on the night along with 11 rebounds, two assists, a steal and a deflection. He followed it up Tuesday with 26 points and six rebounds in a close 65-64 loss to Sabino.

Masai Dean, Junior, Cholla – In Monday’s 64-58 victory over Flowing Wells, Dean led the team in scoring with 24 points. He also had six rebounds, six assists and three steals to help the Chargers pick up the victory. He then followed it up later in the day with 25 points, five assists, two steals and three rebounds to help Cholla pick up a 63-58 win over Tanque Verde. On Wednesday, Dean put up 30 points, six rebounds, five assists and two steals in the 78-62 loss to Mica Mountain in the Aztec Classic.

Brayden Gant, Junior, Coolidge – Playing in the Central Arizona Classic on Monday, Gant had a strong game for Coolidge to help the Bears pick up a 61-54 victory over the Sabino Sabercats. He finished the game with 22 points and eight rebounds, leading the team in both, along with three assists, three deflections and two steals. He followed it up later in the day in the 74-70 downing of Pueblo, posting 29 points while shooting 69 percent from the field, along with nine rebounds, two steals, a block and an assist. On Tuesday, he posted 30 points, seven rebounds and two deflections, along with a block, an assist and a steal to help defeat Poston Butte 75-69.

Aadem Isai, Junior, Valley Vista – Helping Valley Vista to a 65-49 victory over Mojave of Las Vegas, NV, in the Tarkanian Classic on Monday, Isai led the team in scoring with 27 points. He also had six assists, five rebounds, four deflections and three steals for a strong all-around performance.

Richard Legarra, Junior, Flowing Wells – In a tournament game against The Gregory School of Tucson, Legarra posted a career-high 22 points, along with 10 rebounds, to help Flowing Wells pick up a 63-42 win.

Kevin Patton Jr., Junior, Maricopa – It was a solid week for Patton Jr. On Tuesday against Page, he had 29 points, seven rebounds, four steals, three assists and three blocks to help Maricopa pick up an 80-27 win in the Central Arizona Classic. Continuing on Wednesday against Coolidge, he posted 30 points, eight rebounds, four blocks and a pair of assists and steals in the 60-57 win.

Edmond Touye, Senior, Poston Butte – In Wednesday’s game against Williams Field, Touye led the game in scoring by exploding for a career-high 28 points. He also had five rebounds, as well as an assist, a steal, a block and a deflection to help the Broncos defeat the Black Hawks 65-47.

Nicolas Walker, Junior, Willow Canyon – The Wildcats have a team full of talented players, and Walker is just one of them. In Monday’s 100-42 victory over Sahuarita, Walker led the game in scoring with 22 points, shooting an outstanding 90 percent from the field. He also had five rebounds, four steals, three deflections, two blocks and two assists for an outstanding night on the court in the Pima College Aztec Classic.