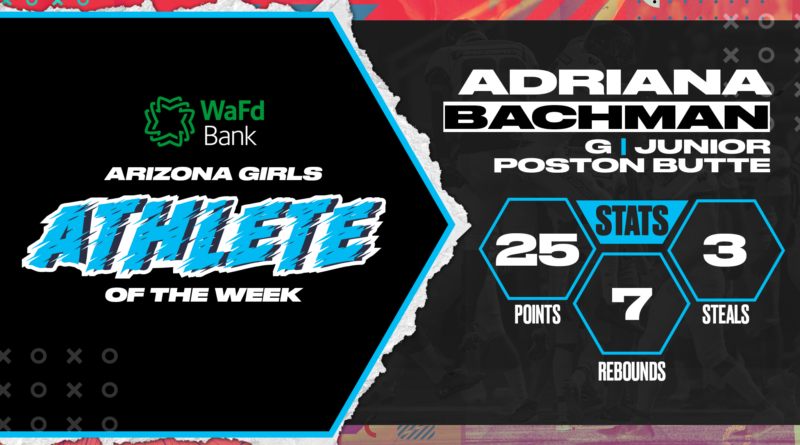 In Poston Butte’s tournament game against Mohave on Monday, the junior dominated the court in the 56-28 win. Bachman alone posted nearly as many points as the entire opposing squad’s roster, dropping 25 points on the night. She also had 12 deflections, seven rebounds, three steals and two assists in the win.

Bachman ran away with this week’s honor, receiving 97.8% of the total vote.

Rebecca Arave, Junior, Lee Williams – Helping the Volunteers to a 52-42 victory over Thunderbird in a tournament game Monday, she had a double-double with 21 points and 13 rebounds along with five steals, five assists, four deflections and two blocks.

Kylee Callihan, Senior, Salpointe Catholic – The senior was named one of the Nike Tournament of Champions All Tournament Team members for the John Anderson bracket. Callihan finished the weekend averaging 16.5 points per game, 4.5 rebounds, 3.7 assists and 3.2 steals in the four-game span.

Victoria Cazares, Junior, Pueblo – Playing against the 6A Basha Bears in the Nike Tournament of Champions on Wednesday, the 4A Pueblo Warriors were able to pick up a 63-43 win led by Cazares’ 33 points. She also had seven steals, six deflections, four rebounds and an assist to help get the win.

Demetria Dosela, Freshman, Miami – The freshman’s outstanding season continues as she had a strong showing Tuesday, posting 23 points, 11 rebounds and a trio of two assists, steals and blocks to help the Vandals defeat the Coolidge Bears 54-46.

Mackenzie Dunham, Junior, Sunrise Mountain –Helping the Mustangs to an enormous victory over the Westlake Warriors out of California during the Nike Tournament of Champions, Dunham had a double-double with 19 points and 13 rebounds, along with four assists, two steals and two blocks to help the team pick up a 74-55 win.

Sara Enriquez, Freshman, Pueblo – In Wednesday’s Nike Tournament of Champions game, Enriquez had a career-best performance against the Basha Bears. She posted a personal-best 23 points, along with six steals, three rebounds, two deflections and two assists in the Warriors’ 63-43 win.

Alyssa Heath, Senior, Mohave – Returning to the list this week is Heath, who had an explosive performance Monday against Lake Havasu. Heath posted a double-double with 18 points and 12 steals on the day, along with six rebounds, four assists and two blocks to help Mohave defeat Lake Havasu 50-26.

Brooke Hunter, Junior, Lee Williams – Tying a career high of 16 points in Monday’s 52-42 win over Thunderbird in a tournament game, Hunter also had 13 rebounds for her first-ever double-double. She nearly made it a triple, with seven steals and six deflections on the night.

Taylor Jacobs, Senior, Canyon View – Among Canyon View’s first class of seniors is Taylor Jacobs, who had a phenomenal game Tuesday to help the Jaguars remain undefeated. In a 64-52 win over Poston Butte, Jacobs had 22 points, nine rebounds, two deflections, an assist, a steal and a block.

Madison Pond, Sophomore, Estrella Foothills – In Monday’s tournament game against Thunderbird, Pond had a career-best performance to help the Wolves pick up a 67-38 win over the Titans. She had a double-double with 21 points and 12 rebounds, along with four steals, three assists and a deflection.

Nashelle Ponds, Junior, Sahuaro – Ponds helped lift Sahuaro to a huge 55-20 victory over Willow Canyon on Monday at the Cougar Classic Invitational Tournament, posting a double-double with 19 points and 10 rebounds, along with three blocks, an assist and a steal.