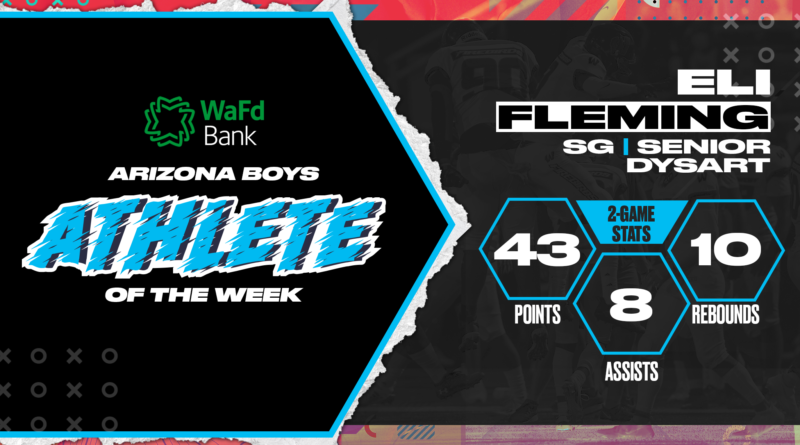 The senior makes the list this week for his performance against Buckeye on Wednesday. Leading the team with 22 points, he also had seven assists and six rebounds to help the Demons pick up an 82-67 win. On Thursday, he followed it up with 21 points, four rebounds, three steals and an assist in the 82-37 win over Barry Goldwater.

Fleming ran away with this week’s honor, receiving 69.04% of the total vote.

Kameron Bender, Senior, Higley – Helping the Knights to a 69-61 victory over Apollo on Thursday, Bender led the team in scoring with 24 points — a career high. He also had five rebounds, five deflections, two assists and two steals.

David Bright, Senior, Willow Canyon – Despite Wednesday’s 76-66 loss to the Shadow Ridge Stallions, Bright still dropped a double-double with 21 points and 10 rebounds, along with four deflections, two assists, a steal and a block.

Nate Calmese, Senior, Mesquite – In Friday’s road game in the high-altitude of Prescott, Calmese showed off his athleticism and abilities with a stellar performance to help Mesquite to an 82-71 victory. With 34 points, he led the team in scoring, while also picking up nine assists, five rebounds and four steals on the night.

Rafe Canale, Senior, Sunrise Mountain – With a career-high 32 points on Thursday in the 77-37 victory over Paradise Valley, Canale got his opportunity to step up and lead the team in scoring. Shooting 65 percent from the field, he also had seven rebounds, four deflections, three assists, three steals and a block to help the Mustangs continue their strong start to the season.

Marcus Coleman, Senior, Pueblo – Leading Tuesday’s game in scoring, Coleman did a little of everything to help Pueblo pick up the 61-40 win over Amphitheater. He had 22 points, six rebounds, three steals, two assists, a block and a deflection. He doubled down on his dominance this week in Wednesday’s game against Combs, with 29 points, eight rebounds, five deflections, two steals and two assists in the 67-62 victory.

Bryce Ford, Junior, Pinnacle – With a career-best performance, Ford had 32 points while shooting 63 percent from the field to carry the load as Pinnacle’s leading scorer on Monday in a 57-55 battle for victory against Hamilton. Ford also had five rebounds, an assist and a block in the win.

Jesse Gray, Senior, Poston Butte – Helping Poston Butte to a 74-32 win over Shadow Mountain on Tuesday, Gray posted 29 points while shooting 71 percent from the field, along with five steals, a rebound and an assist.

Brady Henige, Sophomore, Cactus – The Cobras have been on a tear, and the sophomore big has been a huge reason. In Friday’s 76-61 victory over the O’Connor Eagles, Henige led the game in scoring with 28 points while also notching a double-double with 15 rebounds.

Chito Herrera, Junior, Camp Verde – With a career-high 23 points on Tuesday in the 83–73 win over Payson, Herrera had a double-double with 14 rebounds, three assists and a steal.

Caden Hunter, Junior, Liberty – Posting a double-double in the 87-58 victory over Tolleson on Monday, Hunter led the team in both scoring and rebounding with 26 points and 14 rebounds. He also had three assists, two steals, a deflection and a block, rounding out a strong night on the court.

Rob Jenkins, Senior, Cactus – Starting the week off strong, Jenkins posted a career-high 25 points in Monday’s 62-36 win over Greenway. Shooting 75 percent from the field, he also had six deflections, four assists, three rebounds, three steals and a block to help the Cobras pick up the win.

Jason Parent, Senior, Prescott – In Tuesday’s 68-55 victory over Mingus, Parent dominated on the court, dropping a double-double with 24 points and 10 rebounds. He also had four assists, four steals, four deflections and a block.

Isaiah Smith, Senior, Flowing Wells – Helping the Caballeros pick up a 61-51 win over Casa Grande on Wednesday, Smith had a double-double with 21 points and 14 rebounds, along with seven assists, six steals, five blocks and a deflection.

Pascal Volz, Senior, McClintock – Exploding for a career-high 29 points on Monday, Volz helped lead the Chargers to a definitive 92-50 stomping of the Central Bobcats. In addition to his 77 percent shooting from the field, he also recorded nine rebounds, an assist and a steal.

Jaylen Wesley, Senior, McClintock – Wesley posted a double-double on Monday with 26 points and 12 rebounds in a 92-50 beatdown of Central. He also had seven steals and four assists to help his team pick up the win, teaming up with Volz to dominate the court.