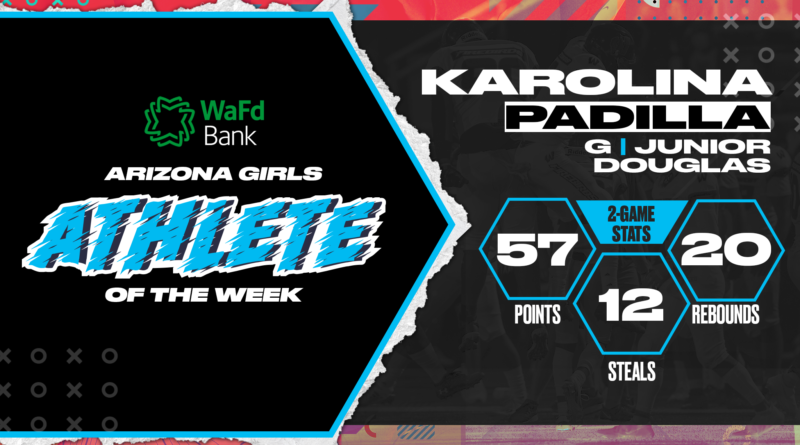 With a career-best 30 points, the junior did most of the heavy lifting in Tuesday’s 50-44 loss to Sunnyside. She also had 10 rebounds, good for a double-double, along with seven steals and two assists. She followed it up on Wednesday in the 66-31 victory over Palo Verde with a double-double, posting 27 points and 10 rebounds alongside her five assists, five steals and a block. Wrapping up the week on Friday, she posted 27 points, 13 rebounds, three assists and three steals despite Douglas’ 55-50 loss to Cienega.

Padilla received 44.7% of the vote, beating out Xavier’s Sienna Cherwinski who finished second with 33.67%. St. Mary’s Alondra Reyes finished third with 11.63% and Blue Ridge’s Ramona Gregg finished fourth with 5.02%. There were over 40,000 votes tallied this week!

Meisha Caserio, Sophomore, Gilbert – After a stellar freshman year, Caserio is back and making noise already early in the season. Helping the Tigers pick up a 76-30 win over Apollo on Tuesday, Caserio led the team in scoring with 23 points. She also had six steals, five deflections, four assists, three rebounds and a block.

Victoria Cazares, Junior, Pueblo – It was an outstanding week for the junior, who passed a huge career milestone on Friday. Leading up to it, she helped lead Pueblo to a 58-24 victory over Combs on Wednesday with 30 points, four steals, a deflection and a block. On Friday, she officially joined the 1,000-career point club in Pueblo’s 55-48 loss to Buena. With 32 points on the night, she also had four steals, three assists, two deflections and two rebounds before Pueblo took off for the Nike Tournament of Champions.

Talia Dial, Senior, Dysart – In Thursday’s 60-52 victory over Barry Goldwater, Dial had a double-double with 29 points and 10 rebounds. She also had four assists, four steals, three blocks and two deflections to help her team escape with the win.

Demetria Dosela, Freshman, Miami – Returning to the list once again this week is the freshman from Miami, who opened up the week by posting 23 points, eight steals, five rebounds, four assists and three blocks in the 70-14 stomping of the Globe Tigers on Monday. She followed it up on Wednesday with 22 points, 12 rebounds, four assists, four steals and two blocks to help the Vandals to a 54-46 victory over Arete Prep. Thursday, she dropped a double-double with 25 points and 12 steals to go along with her five assists and four rebounds to help Miami remain undefeated.

Brandy Edwards, Senior, Alchesay – Helping lift the Falcons to a 64-35 blowout over Blue Ridge on the road Thursday, Edwards exploded for a career-high 22 points in the victory while shooting 71 percent from the field. She also had eight steals, two assists and two rebounds.

Belinda Gradias, Sophomore, Yuma – Contributing all over the court to help the Criminals pick up a 55-15 victory over Kofa on Wednesday, the sophomore had a double-double with 12 points, 15 rebounds, five steals, three blocks and two assists to make her first appearance on our list.

Ramona Gregg, Freshman, Blue Ridge – Posting a career-high 25 points in Saturday’s 68-12 win over San Miguel, Gregg shined all over the court for the Yellow Jackets. In addition to leading the team in scoring, she also led the team with 13 rebounds on the night.

Kadie Healy, Senior, Sabino – Playing in two games on Friday, Healy had an outstanding performance in both. In the first game against Imperial, she had a double-double with 23 points and 11 rebounds, along with an assist to help defeat Imperial 47-34. In the game against Marana later in the day, she followed it up with 24 points, four rebounds and three steals to help down the Tigers 57-36 as Sabino remains undefeated.

Alyssa Heath, Senior, Mohave – In Thursday’s 83-19 blowout of the Cortez Colts, Health had a double-double with 27 points and 10 rebounds in the win. She nearly had a triple-double, with nine assists on the night as well, along with seven steals and a block.

Salais Jayla, Sophomore, Westview – As the sophomore finally gets settled into playing varsity at the high school level following last year’s hiatus for Westview, we’re seeing her start to shine on the court. On Monday, she had an outstanding performance to help the Knights pick up a 67-27 win over La Joya, leading the game in scoring with 23 points. She also had eight rebounds, four steals, three assists and a block to help pick up the win. Tuesday, she followed it up with an incredible 39 points, seven rebounds, seven steals and four assists in the 82-18 victory over San Luis.

Britany Kogbara, Junior, Peoria – Helping the Panthers to a 74-15 blowout of Apache Junction on Friday, Kogbara notched a triple-double with 22 points, 11 steals and 10 rebounds. She also had three blocks on the night to help Peoria keep its recent hot streak alive.

Navine Mallon, Junior, Flowing Wells – Back on the list again this week is Mallon as she continues to dominate the competition in Southern Arizona. In Wednesday’s 66-28 beatdown of the Casa Grande Cougars, Mallon posted more points than the entire Cougars squad with 35, shooting 74 percent from the field. She also had six rebounds, five steals, three assists and a block.

Nayeli Nidez-Acuna, Sophomore, Sunnyside – Nidez-Acuna had a career-best performance on Tuesday, lifting Sunnyside to a 50-44 win against Douglas. She had a double-double with 20 points and 11 rebounds, along with five steals, two blocks and two assists.

Tianna Reeder, Senior, Estrella Foothills – Lifting the Wolves to a 63-43 victory over ALA-Queen Creek on Wednesday, Reeder was one point shy of her career high set as a freshman. Reeder had 24 points, three rebounds, three steals, two assists and a block on the night.

Alondra Reyes, Freshman, St. Mary’s – As only a freshman, Reyes had a career-high 21 points on Thursday despite the 48-45 loss to Paradise Honors. She was also able to snag 11 rebounds for a double-double, along with three steals and two blocks.

Jayla Scott, Senior, Vista Grande – Leading Monday’s game in scoring, Scott’s 18 points helped the Spartans pull away with a 48-40 win on the road against Pueblo. Scott also had 14 rebounds for a double-double, along with four blocks, two steals and an assist.

Emily Shedd, Senior, Vista Grande – Shedd had one of her best performances on Friday to help Vista Grande pick up a 64-47 win over Coolidge, posting a double-double with 20 points and 14 rebounds. She also had an assist and a steal in the win.

Ariyanna Sorenson, Senior, Cienega – With one of the strongest performances of her career, Sorenson’s 20 points, seven rebounds, five assists and three steals helped Ciegena pick up a 64-51 win over Rincon/University on Monday. She followed it up on Thursday by posting a double-double to help Cienega edge Sunnyside 51-44, putting up 17 points, 10 rebounds, three assists and a steal.