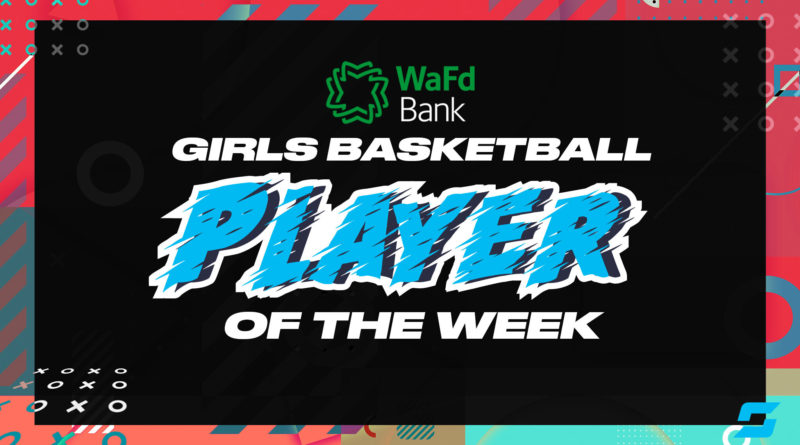 Here are the candidates for the WaFd Bank Arizona High School Girls Basketball Player of the Week for Dec. 6-12 as nominated by coaches, fans and readers.

Read through the nominees and cast your vote. We’ll send a free SBLive T-shirt to the winner of the poll! Voting will conclude Sunday at 11:59 p.m. and the winner will be announced Monday.

Victoria Cazares, Junior, Pueblo – As one of Pueblo’s top players last season, it’s no surprise she’s already off to a dominant start. Cazares had back-to-back stand-out nights on Thursday and Friday against Walden Grove and Cholla to help her team walk away victorious. On Thursday, she had 25 points, seven assists, seven steals, four deflections and three rebounds to help pick up a 65-15 victory. On Friday, she posted 33 points, seven assists, seven steals and a block to help defeat Chollar 71-10.

Trayanna Crisp, Senior, Millennium – The future Sun Devil had a dominant night on Tuesday in the 81-14 rout of Centennial. Crisp led the game in scoring with 17 points while also notching 11 deflections, six assists and four steals.

Kylie Dennis, Senior, Mountain Ridge – In Monday’s 69-35 victory over Copper Canyon, Dennis had a double-double with 15 points and 18 rebounds. She also had two assists and two steals for the Mountain Lions to help them remain undefeated on the season. After starting off the week strong, she closed things out the same way on the court against Trevor Browne. Dennis led the game in scoring while notching a double-double with 22 points and 13 rebounds to go along with her three steals, two blocks and an assist in the 95-6 win.

Talia Dial, Senior, Dysart – Dial, who passed 1000 career points on November 23rd, had back-to-back explosive games for the Demons on Monday and Tuesday. In Monday’s game against Cortez, Dial put up 31 points, seven rebounds, three steals and two assists in the 68-20 blowout of Cortez. On Tuesday, she followed it up with 30 points, nine rebounds, two steals and a block in the 56-50 loss against Higley.

Sophia Doromal, Sophomore, Cesar Chavez – Welcome to varsity hoops, Doromal. Cesar Chavez was a program barred from action last year, giving her an opportunity to take people by surprise this year. She did exactly that on Thursday in the 59-30 win over Tolleson, where she posted 20 points, five assists, three rebounds and three steals for her best performance to date.

Demetria Dosela, Freshman, Miami – Shaking things up in the small Eastern Arizona town, the freshman is making some noise for Miami (which the natives will tell you is pronounced “Mi-am-uh”). She helped the Vandals pick up a 53-27 win over Cibecue, leading the team in scoring with 15 points. She also had eight rebounds, eight steals, four assists and two blocks. She followed it up on Thursday by exploding with 25 points, seven rebounds, a pair of blocks and steals, and one assist in the 67-44 victory over Florence. She finished things up on Friday with a double-double in the 89-29 victory over Chandler Prep with 23 points and 15 rebounds, along with eight steals and five assists. What a week!

Morgan Evenson, Sophomore, Gilbert – In Monday’s big rivalry game against Highland, Evenson led the game in scoring with 20 points in the 61-38 win over the Hawks. Evenson also had five rebounds, two deflections and an assist.

Jaci Gonnie, Sophomore, Winslow – Leading the Bulldogs in scoring on Tuesday against Page, Gonnie had 25 points along with four rebounds, three assists, two steals and a block to help pick up the 63-46 win.

Shamara Goodwin, Senior, Alhambra – Alhambra’s struggles in recent years extend far beyond COVID, but the adversity hasn’t stopped Goodwin from attacking it with her all. In Monday’s close 37-33 loss to Maricopa, Goodwin had a double-double with 11 points, 11 rebounds, two assists and a block. For the Lions, it’d been nearly two years since their players have taken the court to even practice and the team was left without a head coach for much of the pandemic.

Belinga Gradias, Sophomore, Yuma – In Monday’s 44-14 victory over San Luis, the second-year varsity sophomore had the best game of her career so far. She notched a double-double with 16 points, 12 rebounds, five blocks, five steals and three assists.

Taliyah Henderson, Freshman, Salpointe Catholic – Welcome to high school, Taliyah Henderson. The freshman had an outstanding night on Monday in the 88-33 victory over Catalina Foothills. Shooting 77% from the field, she had 27 points, four rebounds, three steals and three deflections. Henderson is already setting herself up as a player to watch early in her career, as she’ll hope to help lead the Lancers back to the championship this year.

Kaisha Henry, Senior, Verrado – Henry returns to this year’s list following her performance against Sierra Linda on Tuesday, where she posted 21 points, seven rebounds, five steals and four assists to help snag a 77-24 victory. In Friday’s win over Glendale, she had 22 points, eight steals, five rebounds and two assists to help pick up the win.

Ashiian Hunter, Junior, Mesa – Welcome back, Hunter. Frequenting last season’s player of the week list, Hunter helped Mesa pick up a 42-32 victory over Cesar Chavez on the road on Monday to make it back once again. She had a double-double with 15 points and 10 rebounds, along with six steals and four assists.

Navine Mallon, Junior, Flowing Wells – Mallon was on the list quite a few times for her performances last season, and the junior finds herself back on the list once again early this season. Against Rincon/University on Monday, Mallon dominated in all aspects of the game. Posting a double-double, Mallon had 18 rebounds and 18 points, along with eight assists, seven steals and a block in the 62-41 win. In Thursday’s 66-49 victory over Amphitheater, she kicked things into beast-mode once again with another double-double, this time with 23 points and 15 rebounds. She also had eight steals, six assists and a block in the game.

Ella Murakami, Sophomore, Basha – The second-year varsity player helped Basha pick up a 56-39 win over Corona del Sol on Monday with an explosive performance to really start kicking things into gear for the Bears. With 17 points, 12 rebounds, five assists and two deflections, Murakami was doing a bit of everything.

Dominique Nesland, Sophomore, Xavier College Prep – Posting a career-high 27 points on Thursday, Nesland’s performance helped the Gators pick up a 76-46 win over Pinnacle. She also had four rebounds, four assists and a steal in the win.

Aiyanna Perkins, Freshman, McClintock – Coming in hot, the freshman had an explosive game on Tuesday to help power McClintock to a 57-27 victory over cross-town rival Tempe. With 23 points, six rebounds, four steals, three deflections, three assists and two blocks, Perkins was an all-star for the Chargers.

Tianna Reeder, Senior, Estrella Foothills – With one of her best games of the season so far, Reeder was able to notch a double-double on Tuesday in the 47-32 rout of Moon Valley. Reeder dropped 17 points, 10 rebounds and three blocks in the win.

Madison Reibel, Sophomore, Canyon View – After helping Canyon View reach the playoffs in its first year as a varsity program, Reibel is back as one of the team’s top returners. In Thursday’s 55-14 victory over West Point, Reibel dropped 23 points, five steals and five assists to help the Jaguars remain undefeated.

Allison Saunders, Junior, Campo Verde – With one of her best performances of the season so far, Saunders was able to put up 20 points, eight rebounds, three steals and three deflections in the 50-26 win over West Point on Tuesday.

Christina Sausedo, Senior, Desert Edge – In Tuesday’s game against Buckeye, Sausedo led the team in scoring with 22 points. She also had seven rebounds, six steals and two assists to help the Scorpions pick up a 44-33 win.

Dylan Swindle, Freshman, Desert Vista – Helping the Thunder pick up a 77-40 victory over Westview on Friday, the freshman led the game in scoring by dropping 25 points while shooting 80 percent from the field. She also had four rebounds, three steals and an assist in the win.

Mya Way, Junior, Mesquite – Exploding for a career-high of 29 points on Tuesday in the 70-20 win over Combs, Way also had six assists and six steals, along with four rebounds, to help the Wildcats earn the win.