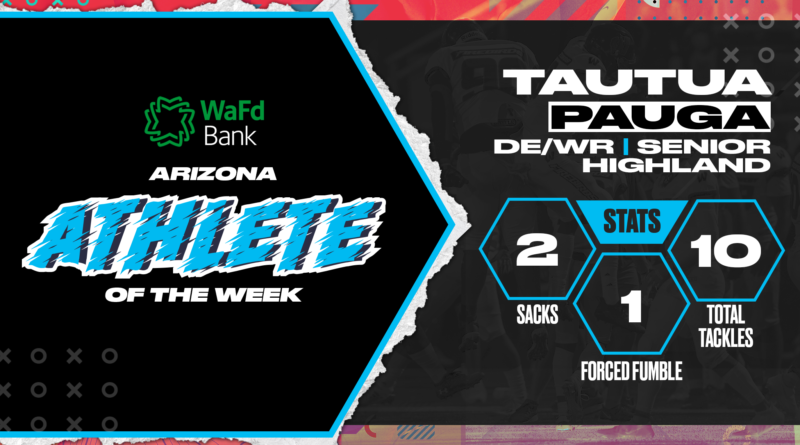 The senior was one of four players for Highland to tally 10 tackles on the night. However, seven of his tackles were solo and five of them were tackles for a loss. He also had two sacks and a forced fumble to help shut down Casteel in a 24-7 rout of the Colts.

Pauga received 52.5% of the vote, beating out Cienega’s Ritchie McCormack who finished second with 32%. Horizon’s Skylar Partridge finished third with 8.76% and Poston Butte’s Amari Gillmore finished fourth with 5.67%. There were over 55,000 votes tallied this week!

We are currently accepting WaFd Bank Player of the Week nominations. If you would like to nominate an athlete, please email athleteoftheweek@scorebooklive.com or message us on Twitter or Instagram at @sbliveaz.

Navi Bruzon, Sophomore, Liberty – The sophomore quarterback completed 12 of his 13 pass attempts for 129 yards and a touchdown while also rushing for 157 yards and two touchdowns on 17 carries. Liberty went on to defeat Basha 38-20.

Kiyon Grayes, Senior, Chandler – While he only had two receptions on the night, both were for touchdowns as he helped the Wolves defeat the Queen Creek Bulldogs in the Open Division quarterfinals.

Amari Gillmore, Senior, Poston Butte – Gillmore was the leading tackler on the night, with six solo and five assisted. He also had an interception he returned 51 yards and was responsible for forcing a fumble.

Kayden Luke, Sophomore, Canyon del Oro – In the Dorados’ 38-27 loss to Glendale, Luke was able to showcase a bright future with the young squad when he rushed for 183 yards and three touchdowns on 20 carries.

Jaedon Matthews, Sophomore, Saguaro – Rushing for 137 yards and a touchdown on eight carries, the sophomore back had a strong showing in the 42-21 rout of Cactus in the Open Division quarterfinals.

Ritchie McCormack, Senior, Cienega – Despite the Bobcats’ 45-21 loss to Horizon, McCormack went out with a bang. He rushed for 151 yards on 20 carries in the game. A two way player, he also had 14 tackles on the night.

Gavin Parks, Junior, Desert Edge – With seven receptions for 109 yards and two touchdowns, Parks helped lead Desert Edge to a 31-13 victory over Desert View on Friday in the 5A quarterfinals.

Skylar Partridge, Senior, Horizon – Completing 17 of his 24 pass attempts for 251 yards, three touchdowns and no interceptions, Partridge helped lead the Huskies to a 45-21 victory over Cienega.

Brayten Silbor, Senior, Chaparral – Hitting on 18 of his 25 pass attempts for 326 yards and four touchdowns, Silbor helped lead the Firebirds one step closer to another 6A title in the 41-36 victory over Pinnacle.

Gavin Smith, Senior, Notre Dame Prep – Smith did a phenomenal job of helping the Saints move the ball down the field despite the 45-42 loss to Salpointe Catholic. In the game, Smith had 95 yards and two touchdowns on seven carries along with four receptions for 106 yards and a touchdown.

Nick Switzer, Junior, Hamilton – Rushing for 150 yards and a touchdown on 12 carries, he also had one catch for 29 yards in the Huskies’ 38-14 rout of ALA-Queen Creek in the Open Division quarterfinals.

Dylan Tapley, Sophomore, Desert Mountain – Snagging two interceptions in the game against Sunrise Mountain, he also had four tackles to help the Wolves defeat the Mustangs 17-8.

CJ Tiller, Junior, Williams Field – Airing things out on Friday, Tiller hit 18 of his 21 targets for 324 yards, five touchdowns and no interceptions in the Blackhawks’ 52-17 rout of Mountain Ridge.

Carter Wojcik, Senior, Mesquite – Wojcik had six receptions for more than 150 yards and three touchdowns in the 27-13 victory over Lee Williams.