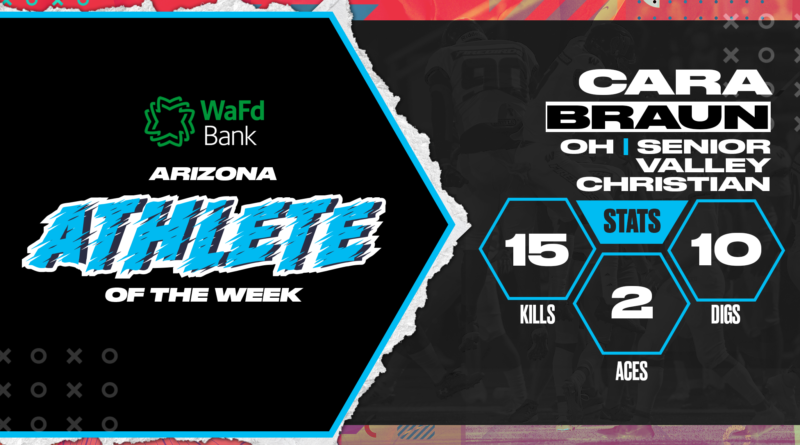 The senior’s 15 kills, 10 digs and two aces led the way for Valley Christian in the 3-0 win over Snowflake in the 3A championship match.

Braun received 36.68% of the vote, beating out Desert Vista’s Antonio Delgado who finished second with 32.22%. Hamilton’s Tatum Thomas finished third with 12.6% and Sandra Day O’Connor’s Brian Dominguez finished fourth with 2.48%. There were over 15,000 votes tallied this week!

Devin Bowling, Senior, Benson – In the first half of the playoff game against St. Johns, Bowling had 267 yards and three touchdowns on just 12 carries. Benson went on to defeat St. Johns 48-6, with Bowling closing the night with a phenomenal stat line. Rushing for just under 420 yards on 18 carries, he finished with five touchdowns. His 419 rushing yards were good for a new school record.

Brian Dominguez, Senior, Sandra Day O’Connor – Helping the Eagles defeat their rivals at Mountain Ridge, Dominguez had two touchdowns on the ground, one for nearly 50 yards. O’Connor won the game 28-3.

Kyri Jamison, Junior, Williams Field – Coming up with a huge interception at the 2-yard line, Jamison was able to stop Brophy from scoring while essentially sealing a win for the Blackhawks.

Nicco Marchiol, Senior, Hamilton – Helping Hamilton get its first win in the Battle of Arizona Avenue since 2013, he broke the school record for season touchdown passes with 33 in the 21-14 victory over Chandler.

Adam Mohammed, Sophomore, Apollo – He finished the night with 199 yards and four touchdowns on 30 carries in the 61-38 rout of Camelback on Friday.

Brayton Silbor, Senior, Chaparral – Passing for 298 yards and four touchdowns, Silbor set a Chaparral record for passing yards in a season with 3,067 in the win over Pinnacle.

Richard Stallworth, Junior, Yuma Catholic – In the 68-13 rout of Round Valley in the 3A quarterfinals, Stallworth set a state record. On his eighth touchdown pass of the night, he surpassed the previous record for passing touchdowns in a single season, making it 65. Stallworth will have the potential to continue adding to this number in this week’s semifinal game against ALA-Gilbert North.

Jordan Middleton, Senior, Hamilton – Middleton had a match-high 25 kills, 12 digs and two aces to lead Hamilton to a 3-1 win over O’Connor in the 6A final.

Taylor Johnson, Senior, Horizon – Johnson had 14 kills in Horizon’s 3-0 win over Millennium in the 5A final.

Kendal Murphy, Junior, Horizon – Murphy had 14 kills and six digs in Horizon’s 3-0 win over Millennium in the 5A final.

Lauren Ping, Junior, Desert Vista – At the Division 1 championships, Ping won her third consecutive individual title, with a time of 17:39.4.

Mia Hall, Junior, Flagstaff – Hall won the Division 2 race at the state championships with a time of 18:06.2.

Jessica Madrid, Senior, Round Valley – Madrid finished with a time of 19:52.7 to claim the Division 4 state championship.

Cesar Diaz, Junior, Mingus Union – With a time of 16:20.0, Diaz won the Division 3 race at the state championships.