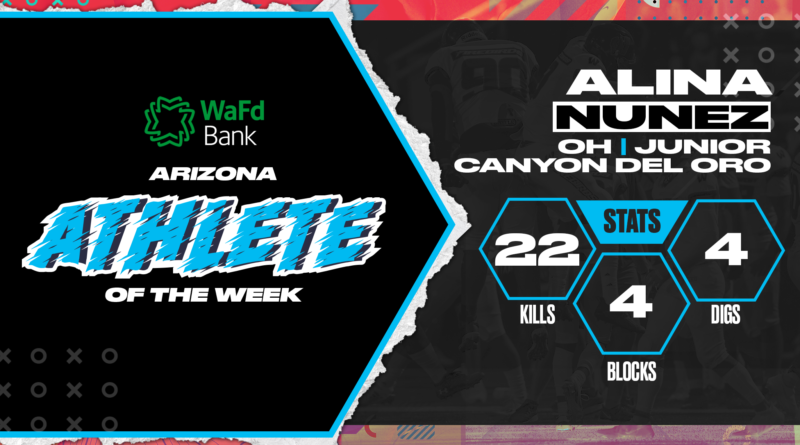 In the Dorados’ 3-0 rout of St. Mary’s on Thursday, Nunez had 22 kills, four digs and four blocks.

Joseph Clark IV, Sophomore, Saguaro – Helping the Sabercats to a 42-28 hard-fought win, Clark had both a 50+ yard reception for a touchdown and a huge interception to help Saguaro pull away late.

Michael Deligatti, Junior, Dobson – Deligatti had the best game of his high school career Thursday night in a 25-14 win over Tucson. He set a personal best with 14 tackles, eight solo and six assisted. He also had three tackles for a loss and a fumble recovery.

Edgar Garcia, Junior, Cienega – Tearing things up on the ground, Garcia had two touchdowns and just under 100 yards as the Bobcats’ aggressive run game helped lift them to a 42-14 win over Marana.

Xavier Marshall, Senior, Tolleson – Marshall had four touchdowns in a 53-24 win over Trevor G. Browne, with three of them coming in the first half.

Parker Orr, Sophomore, Chandler – In a close game against Highland, Orr kicked the go-ahead field goal to give the Wolves a 10-7 win in a gritty battle.

Isaac Stopke, Junior, Lake Havasu – In a 48-31 rout of Coconino, Stopke absolutely tore the ground up. The running back finished with just under 375 yards and five touchdowns on the night.

Andrew Vines, Senior, Notre Dame Prep – Despite the Saints’ loss to Saguaro, Vine had a phenomenal game, racking up 72 rushing yards and 42 receiving yards on four catches in the 42-28 loss.

Kierstyn Barton, Junior, Corona del Sol – Barton was getting it done on the court for the Aztecs on Thursday, starting with serving. Not only did she have seven aces in the game, she also had 12 kills, six digs and two blocks to help defeat Rincon/University.

Anna Berges, Junior, Blue Ridge – Making a difference all around the court, Berges had 15 kills, 11 digs, two aces and a block in the 3-0 rout of Campe Verde on Tuesday.

Blaykli Bobik, Sophomore, Queen Creek – Helping the young Bulldogs advance past Perry with a 3-2 win on Thursday, Bobik had 18 kills, 14 digs and a block.

Kathryn Cherrington, Junior, Ironwood Ridge – In Tuesday’s game against Desert Mountain, Cherrington had arguably one of the best personal performances of the season, with 16 kills, 12 digs, an ace and a block to help pull off a 3-2 win.

Lexi Mallonee-King, Freshman, Chaparral – Leading the game with 16 kills, the freshman helped the Firebirds defeat the Sunnyslope Vikings 3-0 on Thursday. She also had three digs and an ace in the win.

Chloe Murakami, Senior, Basha – Leading the Bears past the Mesa Jackrabbits on Tuesday, Murakami led the game in both kills and digs with 19 and 10, respectively.

Emma Reardon, Senior, Thunderbird – Despite Thunderbird’s 3-2 loss to Deer Valley on Thursday, Reardon was the all-around leader in the game. She finished the final game of her high school career with 17 kills, 15 digs, four blocks and an ace.

Sophia Ross, Senior, Notre Dame Prep – Leading the team in kills against Paradise Honors on Thursday, she helped the Saints snag a 3-0 victory. She finished the night with 15 kills, two digs, two blocks and an ace.

Lauren Rumel, Senior, Catalina Foothills – The state’s leader in kills, Rumel tacked on another 23 in Catalina Foothills’ 3-0 rout of Kellis on Tuesday. She also had 13 digs and a block. She finished her high school career in the 3-1 loss to Campo Verde, where she had 32 kills, 13 digs and three blocks.

Mikayla Shepston, Sophomore, Sunnyslope – In Sunnyslope’s 3-0 rout of Pinnacle on Tuesday, Shepston had 20 kills, 11 digs, an ace and a block.

Jon Barney, Senior, Veritas Prep – Barney was able to edge the competition to take first place at the Rose Mofford Sectional on Thursday, finishing with a time of 15:16.50 in the D-IV race.

Cesar Diaz, Junior, Mingus – Diaz finished the 5000M race on Tuesday at the AIA Hidden Cove D-III Sectionals with a time of 16:15.10 to take home the gold.

Caden Edgerton, Senior, ALA-Ironwood – Taking first place at the Crossroads Sectional for the D-III race, Edgerton finished with a time of 17:06.50.

Myles Floyd, Sophomore, Pusch Ridge – Beating his competition by more than a minute, the sophomore took first place at the Buena Sectional in the D-IV race with a time of 16:40.70.

Terrence Keyes, Senior, Gilbert – Wednesday, Keyes took first place at the Crossroads Sectional for the D-II race with a time of 15:58.00.

Logan Marek, Senior, Ironwood Ridge – On Wednesday, Marek finished the D-II Buena Sectional race with a time of 16:10.60 to take first place in the event.

Bennett Meyer-Willis, Senior, Cibola – At the Crossroads Sectional on Wednesday, Meyer-Willis took first place for D-I with a time of 16:28.10.

Trevor Querciagrossa, Senior, Sunnyslope – At the Cesar Chavez D-I Sectionals on Tuesday, Querciagrossa finished with a time of 15:46.40 to take home the gold.

Parker Stoft, Sophomore, Chandler Prep – Taking first place for the D-IV competition at the Crossroads Sectional on Wednesday, Stoft finished with a time of 17:40.90.

Jor Trujillo-Lira, Junior, Rio Rico – Crossing the finish line with a time of 16:25.70, Trujillo-Lira took home the gold for the D-III Race at the Buena Sectional on Wednesday.

Emma Baugh, Junior, Highland – Finishing with a time of 18:03.50, Baugh took first place on Thursday at the Rose Mofford Sectional for the D-I race.

Evelynne Carr, Junior, ALA-Queen Creek – Finishing more than a minute ahead of her nearest competitor, Carr took first place at the Crossroads Sectional on Wednesday with a time of 18:50.90.

Kyra Floyd, Senior, Pusch Ridge – Edging out the competition, Floyd was able to take home the gold at the Buena Sectional on Wednesday for the D-IV race with a time of 20:18.80.

Mia Hall, Junior, Flagstaff – Hall returns to the list this week for her outstanding performance at the Rose Mofford Sectional on Thursday. She took home first place for the D-II race, clocking in with a time of 17:14.40, finishing more than a minute ahead of her competition.

Erin Hooley, Sophomore, Fountain Hills – Making her first appearance on the list, Hooley took first place for D-III at the Cesar Chavez sectionals last week with a time of 21:04.80.

Taryn Janssen, Freshman, Glendale Prep – With an outstanding performance at the Rose Mofford Sectional on Thursday, Janssen was able to pull ahead of the competition to finish with a time of 19:27.40.

Clara Jones, Sophomore, Campo Verde – Clocking in with a time of 18:53.00 at the Crossroads D-II Sectionals, Jones took first place in the race.

Jessica Madrid, Senior, Round Valley – Taking first place in the Hidden Cove D-IV Sectionals, Madrid finished the race with a time of 19:26.30.

Lauren Ping, Junior, Desert Vista – At the Crossroads Sectional on Wednesday, Ping dominated the D-I competition, finishing two minutes ahead of the nearest competitor by crossing the finish line with a time of 17:39.10.

Madeline Reeves, Senior, Liberty – At the Cesar Chavez D-I Sectionals on Tuesday, Reeves took first place in the race by finishing with a time of 19:21.30.

Kylie Wild, Junior, Salpointe Catholic – Wild took first place at the Buena Sectional for the D-III race Wednesday, finishing with a time of 18:18.70.