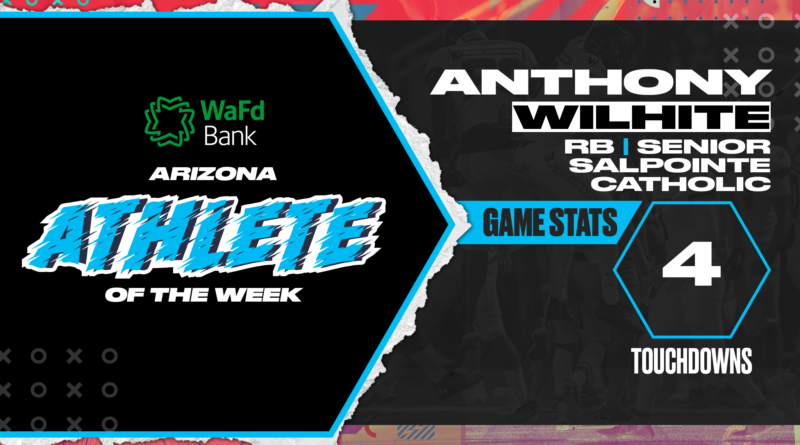 Congratulations to Salpointe Catholic running back Anthony Wilhite for being voted SBLive’s WaFd Bank Arizona High School Athlete of the Week for Oct. 11-17!

In what was essentially the game to determine the region title, the senior helped the Lancers shut out unbeaten Desert View 48-0 with four touchdowns.

Wilhite received 44.32% of the vote, beating out Santa Rita’s Tyrese Linebarger who finished second with 43.79%. Salpointe Catholic’s Kylie Wild finished third with 6.17% and Barry Goldwater’s Markhi Mckinnon finished fourth with 2.79%. There were over 18,000 votes tallied this week!

Barlow provided the Bulldogs with the offensive spark they needed after falling behind 12-0 to Liberty. He punched the ball into the end zone twice, helping Queen Creek march back to a 26-20 win.

In Highland’s 27-12 victory over Perry, Dayley was able to distribute the ball nicely among his receivers, passing for three touchdowns to three separate receivers.

After trailing 28-7 at the half, Joplin helped lead the offense on a wild comeback to defeat Sunnyside in a big battle down south, 36-35. His most critical drive was the final one of the game. Connecting with Jason Wood for a touchdown, the Tigers went for two and were able to convert to take the lead with under 15 seconds remaining.

With five touchdowns in Friday’s game, Linebarger helped Santa Rita pick up its first win of the season, defeating Catalina 40-8.

Lopez had three touchdowns in Brophy’s 28-27 victory over Chaparral, including one on the final go-ahead drive.

In Friday’s road game against Paradise Valley, Mckinnon had five touchdowns for more than 250 yards to help the Bulldogs defeat the Trojans 49-21.

Usually playing as a receiver for the Warriors, Rodriguez has been playing at quarterback following the loss of Diego Ramirez to an ankle injury last week. Rodriguez helped lead the Warriors to the program’s first victory on the road in Phoenix in ages, where he passed for more than 210 yards and two touchdowns in the 42-31 win over Tempe.

With all three rushing touchdowns on Friday against Millennium, Underhill helped lift the Mustangs to a 22-20 victory over the Tigers.

Williams completed 14 of his 19 pass attempts for around 170 yards. He also was able to rush for 95 yards while racking up four touchdowns in the Bears’ 48-21 rout of Mountain Pointe on Thursday.

In Thursday’s game against Globe, Alvarado had 19 kills and eight blocks to help the Gophers sweep the Tigers.

An all-around contributor in Tuesday’s 3-0 sweep of Centennial, she had 14 kills, 11 digs, two aces and a block.

Helping the Pioneers sweep Mountain Ridge 3-0 on Wednesday, Blumentritt had 14 kills and 11 digs.

Despite not being able to rally as a team, Dobosh still had a great personal game against Bradshaw Mountain on Thursday with 16 kills, 13 digs and two aces in the 3-1 loss.

In Wednesday’s 3-1 victory against Sunrise Mountain, Jones had 21 kills, 18 digs and a block.

Pushing the Shamrocks to a 3-2 victory over Parker on Thursday, Martinez had 22 kills, 17 digs, two aces and a block.

Middleton had 16 kills, 12 digs, two aces and a block in Tuesdays 3-0 rout of Desert Ridge before having a nearly repeat performance Wednesday with 16 kills and 11 digs to help defeat Chandler.

Platt helped lift the Bears to victory against Coconino on Thursday with 15 kills, 11 digs and an ace.

With one of her best performances of the season, Trimble was one of three main players helping Liberty defeat Basha 3-1, racking up 16 digs, 15 kills, two blocks and two aces.

Wheaton had an outstanding game Monday against Fountain Hills, with 10 digs, eight kills, six aces and five blocks to help Eastmark get the shutout win.

Finishing the Boys Open 5000m race with a time of 16:44.80, Breinholt took first place at the Casteel Invitational over the weekend.

At the Flagstaff City Meet on Wednesday, Harris took first place for the boys three-mile run, finishing with a time of 15:38.10.

Lundgren won the Boulder Creek Wednesday Meet, finishing the 5000 meter run with a time of 16:01.00, coming in first place by more than an entire minute.

Finishing with a time of 15:46.70, Marek took first place in the Varsity Boys 5000m race at the John Gleeson Lancer Invitational over the weekend.

In the Boys Open 5000m race over the weekend at the John Gleeson Lancer Invitational, Robbins took first place with a time of 17:43.30.

Clocking in with a time of 18:03.80, Baugh took home the gold in the Girls Varsity 5000m race at the Casteel Invitational over the weekend.

On Wednesday at the Flagstaff City Meet, Hall clocked in with a time of 17:43.37 to take first place in the girls three-mile run.

In the Girls Open 5000m race over the weekend at the Casteel Invitational, Jackson was the first to cross the finish line with a time of 20:50.50.

In the Girls Open 5000m run at the John Gleeson Lancer Invitational, Pacheco won the race with a time of 22:10.10.

Finishing in first place once again, Wild had the top time at the John Gleeson Lancer Invitational over the weekend, finishing the Varsity Girls 5000m race with a time of 18:06.30.

At her school’s home meet Wednesday, the freshman won the girls 5000m race, finishing with a time of 20:09.