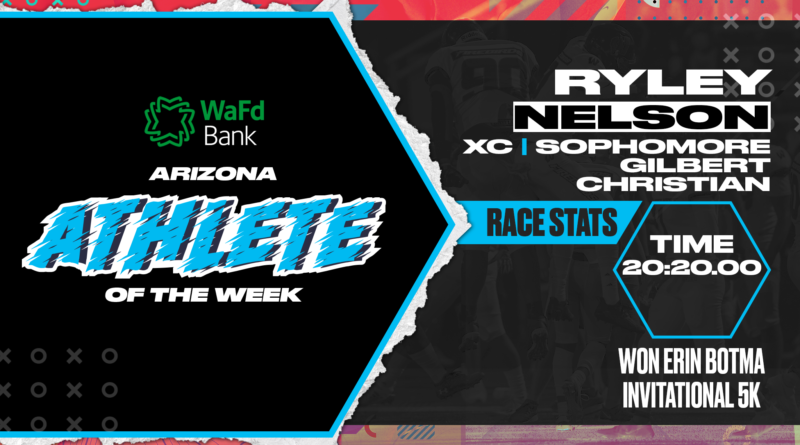 The sophomore received 44.86% of the vote, beating out Casa Grande’s Dematris Azcueta who finished second with 32.14%. Paradise Honors’ Gage Baker finished third with 8.63% and Chaparral’s Grady Hickey finished fourth with 7.47%. There were over 37,000 votes tallied this week!

Dematris Azcueta, Senior, Casa Grande – In Casa Grande’s 56-7 rout of the Douglas Bulldogs, Azcueta had two punt returns, one for a touchdown, for a total of 110 yards along with five tackles and an interception.

Gage Baker, Sophomore, Paradise Honors – In his first varsity game as quarterback, Baker was 19 for 26 for around 400 yards with eight touchdowns and no interceptions to lift the team to a 61-13 win over Odyssey Institute.

Deyon Bradley, Junior, Moon Valley – Despite the Rockets’ 27-26 loss to Arizona College Prep, Bradley racked up 268 yards on 41 carries with a touchdown and a two-point conversion. He also had a 99-yard kickoff return for a touchdown.

Angel Flores, Senior, Casa Grande – Flores had five touchdown passes in the 56-7 domination of Douglas under the Thursday Night Lights Game of the Week.

Will Galvan, Junior, Cactus – Back on the list again this week is Galvan, who passed for seven touchdowns to five different receivers, lifting the Cobras to their fifth straight big win, 54-6 over Poston Butte.

Surge Gboweiah, Senior, Desert View – The Jaguars racked up a whopping 512 yards on the ground in the 46-28 win over Marana, with 315 of the yards coming from Gboweiah on 24 carries. He also had three of the team’s touchdowns.

Rudy Gonzales, Junior, Deer Valley – In the Skyhawks’ 63-35 rout of Walden Grove, Gonzales passed for five touchdowns to help Deer Valley advance to 4-0 on the season.

Javen Jacobs, Senior, Saguaro – Jacobs was an offensive spark plug for the Sabercats in their 49-21 win over Salpointe Catholic on Friday, scoring three touchdowns in the win.

AJ Murphy, Senior, Casteel – The senior had a record-setting night with 384 official rushing yards and five touchdowns in Casteel’s 47-27 win over Higley.

Spencer Nielsen, Senior, ALA Gilbert North – It was a strong game for Nielsen on Friday against ALA Queen Creek despite the 38-35 loss. He had 16 tackles, 10 of them solo tackles, and two of them for losses.

Skyler Partridge, Senior, Horizon – Partridge had five total touchdowns in Horizon’s 43-36 win over Millennium. He passed for 291 yards and rushed for 106.

Isaac Stopke, Junior, Lake Havasu – Both a running back and linebacker, Stopke had four touchdowns on the night while also recording four tackles in the 35-6 win over Mohave.

Abigail Araujo, Junior, Northwest Christian – Araujo had a solid game Tuesday against Wickenburg, leading the way with 17 digs and 15 kills to help the Crusaders sweep the Wranglers.

Allison Birtcil, Senior, Ironwood Ridge – Making her way on the list again is Birtcil, who had 16 digs, 15 kills, a block and an ace in the 3-2 victory over Catalina Foothills on Thursday.

Evan Hendrix, Sophomore, Notre Dame Prep – Back on the list this week is Hendrix, who had 21 kills, nine digs and a block in the Saints’ 3-0 victory over Deer Valley on Thursday.

Tatum Parrott, Senior, Greenway – Parrott had a career-high 42 kills Wednesday in Greenway’s 3-2 battle against St. Mary’s, along with nine digs, an ace and a block.

Emma Reardon, Senior, Thunderbird – Another player returning to the list this week, Reardon had 18 kills, 10 digs, four aces and a block in Thunderbird’s 3-0 sweep of Shadow Mountain.

Lauren Rumel, Senior, Catalina Foothills – Rumel is back on the list once again for her outstanding performance Tuesday, when she had 29 kills, nine digs, three aces and a block to help the Falcons defeat Mountain View Marana 3-1.

Makena Rumple, Freshman, Mesa – Setting a career high of 20 kills Tuesday along with four blocks and a dig, the freshman helped lift the Jackrabbits to a 3-1 victory over Skyline.

Sophia Smith, Junior, Shadow Mountain – In Monday’s game against Moon Valley, Smith had 23 kills, 15 digs, three aces and a block in the 3-2 victory.

Deion Begay, Senior, Westwood – At the Fountain Hills Home Meet on Wednesday, Begay finished the 3.1-mile race with a time of 18:54.

Donovan Bitticks, Sophomore, Horizon – Bitticks won the Thunderbird “Dave Doerrer” Invitational on Saturday for the Boys Freshman-Sophomore 2.8-mile race with a time of 15:40.39.

Jorge Corona Carmona, Senior, Maryvale – Clocking in at 16:12.00 at the Juan Reyes Invitational over the weekend for the Varsity 5000M race, Corona Carmona took home the gold.

Sam Eby, Freshman, Boulder Creek – At the Ray Wherley Invitational in Prescott over the weekend, the freshman won the Boys Freshman/Sophomore 5000M open with a time of 20:05.75.

Landon Holm, Junior, Shadow Ridge – In the Open Boys 5000 Meter Race at the Glendale Showcase, Holm finished in first place with a time of 19:13.33.

Joshua Lumpkin, Senior, Lake Havasu – Lumpkin had an outstanding week. On Wednesday, he won the Ray Reynolds Invitational with a time of 16:51.00 before winning the Kingman Academy Tiger Invitational over the weekend, finishing the 5,000-meter run in 16:47.20, nearly two minutes ahead of his closest competitor and teammate who placed second.

Chase Markunas, Freshman, Hamilton – In the Freshman Boys Division of the Glendale Showcase, Markunas took first place with a time of 17:29.17.

Trevor Querciagrossa, Senior, Sunnyslope – At the Glendale Showcase over the weekend, Querciagrossa won the varsity boys race, finishing almost exactly a minute ahead of the rest of the pack at 15:31.67

Evelyn Carr, Junior, ALA Queen Creek – Carr won the Glendale Showcase’s Girls Varsity 5000M race over the weekend with a time of 19:01.27.

Ava Christensen, Freshman, Red Mountain – At the Ray Wherley Invitational in Prescott over the weekend, the freshman won the Girls Freshman/Sophomore 5000M open with a time of 23:34.85.

Bella Gomez, Sophomore, Xavier College Prep – At the Thunderbird “Dave Doerrer” Invitational over the weekend, Gomez took first for the Girls Freshman-Sophomore 2.8-mile race with a time of 20:08.25.

Jessica Madrid, Senior, Round Valley – In the Girls Varsity 5000M race at the Juan Reyes Invitational over the weekend, Madrid finished with a time of 18:40.90 to take home the gold.

Britney Perera, Junior, Millennium – In the Girls Open 5000M race at the Glendale Showcase, Perera was able to break just far enough away from the pack to comfortably finish in first place with a time of 23:28.78.

Lucy Turley, Junior, Greenway – Turley won the Thunderbird “Dave Doerrer” Invitational over the weekend for the Girls Varsity 2.8-mile race with a time of 18:01.98.

Corinne Warriner, Freshman, Hamilton – Hamilton’s freshmen had a strong weekend, with Warriner joining her teammate Markunas for the Huskies to take first in both of the divisions, finishing the race in 21:25.79.