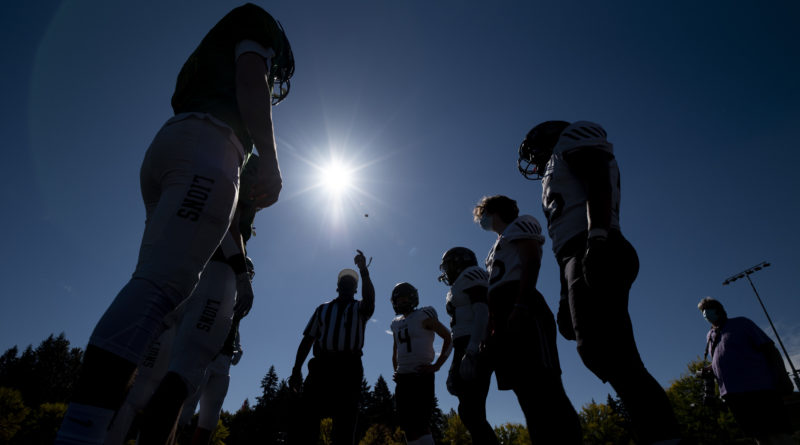 The Wolves continue to hold strong at the top of the list with their most recent 35-19 victory over Pinnacle last week. Chandler moved up one spot in the MaxPreps National Rankings, sitting at No. 11. The Wolves are No. 12 in the SBLive Power 25. They will look to continue their win streak at Perry this week.

Hamilton also moved up one spot in the MaxPreps National Rankings, coming in at No. 17. The Huskies continue their quest to knock off Chandler as the Open Division champions, but it’s one game at a time, and next on the schedule will be an exciting battle against last year’s 6A state champions in the Chaparral Firebirds.

Basha appears to be on track to have quite a season. The Bears’ defense has continued to look dominant, most recently notching a shutout against Valley Vista, while the offense has scored 37 or more points in every game. Basha will be on the road this week to take on Desert Vista.

Mesa’s Mountain View had last week off, but the Toros are going to be looking at their toughest challenge yet when they take on their rivals at Red Mountain on Friday.

The Huskies defeated Millennium in a hard-fought battle, 43-36. Horizon is defying most expectations, especially under a new head coach. The Huskies should be able to make it 5-0 this week against the Apollo Hawks.

Friday night brought another quality win against a quality opponent in Williams Field — the Bulldogs were able to walk away with a 21-20 victory. Queen Creek will need to come back and regroup at practice this week leading up to the game against Casteel, led by AJ Murphy and his legs.

Following a loss to Chandler two weeks ago, the Lions bounced back last week with a win over Red Mountain. This week, they have a bye, as they look to get rested and prepared before hosting the Queen Creek Bulldogs.

Another week, another 50+ point win for the Cobras, making it five consecutive games they’ve scored that many. In the 54-6 win over Poston Butte, the Cobras once again showed they have all the makings of a championship team as the push toward the playoffs continues. This week, Cactus will have a big test against Desert Edge.

The Hawks have been getting the job done week in and week out, and while not on as grand a scale as many of their East Valley counterparts, they’re still in the hunt for a spot in the Open Division playoffs. Highland will be on the road this week at O’Connor, and O’Connor’s creative offensive play calling will put the Hawks’ defense to the test.

Playing under the Thursday Night Lights last week, the Cougars were able to down Douglas 56-7 as they continue to make some noise this season. The Cougars will be on the road this weekend to take on Buena, where they should be able to extend their record to 5-0.

After dropping the first game of the season, the Firebirds have come roaring back to win their next four, including a come-from-behind victory over Saguaro and most recently a solid performance against O’Connor. The Firebirds have a tough test ahead of them Friday against the Hamilton Huskies, but if they can pull off a win, it might be their biggest victory in recent years.

Climbing back into the conversation are the Saguaro Sabercats, who stormed back from their loss against Chaparral to defeat the Salpointe Catholic Lancers 49-21. Saguaro will look to continue making a push toward the Open Division and should be able to rack up an easy win against Maricopa before things get a little tougher.

This week, the Mountain Lions will have the potential to make a statement win against their rivals, the Mountain View Toros, who are currently riding a hot streak. A win here would be big for Red Mountain, especially toward the end of the season as the rankings and final placements start to take shape.

Desert Edge absolutely feasted on the Betty H. Fairfax Stampede, toppling them 59-6 on Friday night. The Scorpions, whose only loss came to Horizon, will take on a tough test in the Cactus Cobras, who have not scored fewer than 50 points in a game this season.

Small school players really don’t get enough credit for their dedication and commitment to the game, playing on both sides of the ball and without a scout team to prepare. Out in Willcox, the Cowboys are off to the best start the program has had in years, and they’ll look to make it 7-0 when they travel to Pima this week.

Friday night brought a ton of frustration for coach Eric Rogers and the Lancers, as the team struggled to be productive on both sides of the ball. Salpointe Catholic will look to bounce back and remain in the hunt for one of the top spots in the playoffs, with another opportunity to get back on track coming this weekend when they host the Pinnacle Pioneers.

Turning up the heat in Southern Arizona are the Desert View Jaguars. Following a year with minimal play, there were a lot of question marks circulating around nearly every football program in Tucson. With minimal outside expectations, the Jaguars have come out to a roaring start, most recently downing the Marana Tigers 46-28. This weekend, Desert View will host Nogales and should improve to 5-0.

The Cougars came down to the Valley last week and took care of business, stunning Combs 48-32 to take home the win. Show Low will return home to face Round Valley, also 6-0, in hopes of remaining undefeated.

Marana suffered a tough loss Friday to the Desert View Jaguars, but the Tigers have proven they’re a force to be reckoned with in the south. They have a bye this week before kicking things back into gear against Sunnyside on Oct. 15.

Despite two losses, the Tigers are an athletic and incredibly talented team with potential to make it deep in the 5A playoffs. Last week, they lost a heartbreaker to the Horizon Huskies, but they’ll look to bounce back against a small yet scrappy Sunrise Mountain team.

Another 3A team taking care of business, the Lobos were able to shut out the Peoria Panthers on Friday, leaving many stunned with their accomplishment. This week, they will look to build off the success when they hit the road to take on Payson.

Mountain Ridge has really started to become a team with the potential to make a run in the 6A playoffs, especially following a huge win over Centennial a few weeks ago. The Mountain Lions, coming off a shutout win over the Westview Knights, will look to show the same level of defensive dominance this week when they take on the La Joya Lobos.

Soaring to the list this week are the Deer Valley Skyhawks, who have had an impressive start to the season. The Skyhawks host Carl Hayden this weekend, and they’ll look to make it five in a row — just three years ago, the team didn’t win a single game the entire season.

Showing resilience, the Bruins responded to their loss against Verrado by knocking off the 3-0 Central Bobcats. While they might not be in the hunt for an Open Division spot, there’s still legitimate potential for the Bruins to make a playoff appearance for the first time in years. The Bruins will look to show they mean business when they take on the Copper Canyon Aztecs this week.

The Lions had a strong win against Catalina Foothills last week, putting the team back on the list as they prepare to take on Sabine, which is having a decent start to the season, as well.