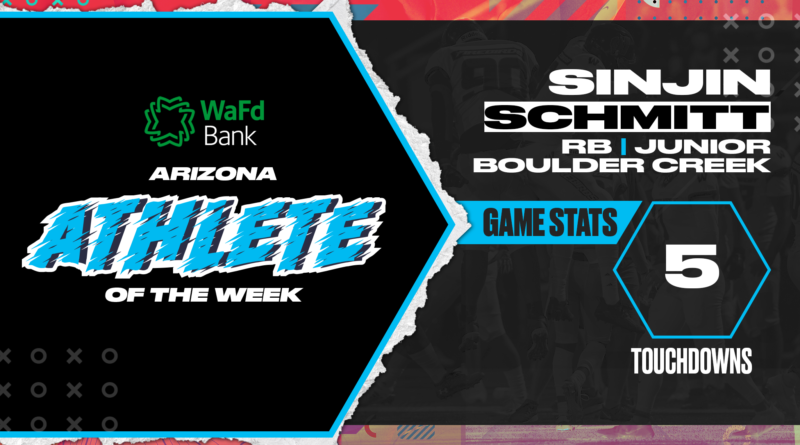 Congratulations to Boulder Creek running back Sinjin Schmitt for being voted SBLive’s WaFd Bank Arizona High School Athlete of the Week for Sep. 20-26!

In the Jaguars’ 56-42 rout of the Higley Knights, Schmitt had five touchdowns as he helped the offense find a way to overpower Higley in the fourth quarter. (Stat Credit: Cody Cameron)

Schmitt received 55.59% of the vote, beating out Williams Field’s CJ Tiller who finished second with 43.71%. There were over 34,000 votes tallied this week!

Carter Allen, Senior, Central – Allen was critical on both sides of the ball for Central, helping the Bobcats improve to 3-0 on the season. He had more than 250 receiving yards, two touchdowns and a clutch interception to help the Bobcats defeat Sierra Linda, 30-16.

Davondre Bucannon, Senior, Chaparral – Chaparral was trailing 20-7 when it looked as if Saguaro was about to score again. After chasing the running back down nearly 60 yards, Bucannon stripped the ball in the end zone to vastly change the trajectory of the game. The Firebirds came back to win the rivalry game, 27-26.

Nason Coleman, Senior, Chandler – It was only his second game back on the gridiron, but his presence was felt in the win over Liberty, where his eight receptions were good for 94 yards and two touchdowns.

Adam Damante, Junior, ALA-Gilbert North – ALA-Gilbert North’s coaching staff named Damante their team’s player of the week after he completed 31 of his 37 pass attempts for 400 yards and four touchdowns in the 42-6 victory over Fountain Hills.

Gabriel Grutzmacher, Senior, Mountain View (Mesa) – Grutzmacher had the play of the game against Mesa, tipping a pass before recovering it and taking it 50 yards to the end zone for a touchdown, helping Mountain View defeat Mesa 24-14 and advance to 4-0 on the season.

Grady Hickey, Senior, Chaparral – At a critical point in the game, Hickey was able to break free around the 15-yard line and take it all the way to the end zone, giving Chaparral the winning touchdown against Saguaro.

Matthew Johanson, Sophomore, Greenway – On just seven receptions, Johanson managed to rack up more than 170 yards and two touchdowns in the 32-22 rivalry win over Moon Valley.

Jordan Legg, Junior, Dobson – The quarterback and the kicker, Legg was essential for Dobson in the game against North Canyon. Not only did he kick the winning field goal in OT, he completed 17 of his 33 pass attempts for more than 325 yards and two touchdowns.

Zeus Pinder, Sophomore, Millennium – The Tigers’ run game was on fire, led primarily by the sophomore, who accounted for more than half of the approximately 240 total rushing yards on the night in the 23-20 victory over Mountain View Marana.

CJ Tiller, Junior, Williams Field – Tiller threw all three touchdown passes in the 21-0 rout of Campo Verde, one being a 29-yard pass to senior Lasjwan Hunter to help the Blackhawks power past the Coyotes.

EJ Warner, Senior, Brophy – Warner had another phenomenal week, completing 20 of his 32 passes for 175 yards to help power Brophy to a 20-7 win over Notre Dame Prep in the Holy Bowl.

Miya Alvarado, Senior, Florence – Leading the team in kills and digs, she had 18 and 11, respectively, along with two aces and two blocks to help Florence defeat San Tan Foothills 3-0 on Tuesday.

Sydnee Broadway, Senior, Sandra Day O’Connor – In a five-set battle against Liberty on Tuesday, Broadway led the Eagles in kills and digs, with 15 and 18, respectively, to help them defeat the Lions 3-2.

Kylie Davey, Senior, Liberty – Davis had a strong overall performance Thursday against Pinnacle, tallying 11 kills, 10 digs, eight aces and one block to help the team to a 3-0 victory.

Eryn Jones, Junior, Millennium – Wednesday’s 3-2 victory over Gilbert was largely due to Jones’ performance. Her game-leading 25 kills were good for a new personal record, and she also nabbed 14 digs and two blocks in the win.

Kayda Lewis, Junior, Mica Mountain – Lewis helped the Bolts to a 3-1 victory over Sunnyside on Monday with 24 digs, 11 kills, a block and an ace.

Alina Nunez, Junior, Canyon del Oro – With 19 kills and 16 digs, Nunez led the team in both areas, while also picking up three blocks and an ace as the Dorados cruised to a 3-0 victory over Rincon/University.

Emma Orndorf, Senior, Marcos de Niza – Her all-around performance on the court Monday night helped lift Marcos de Niza to a hard-fought 3-2 victory over Coconino. She had 28 digs, 12 kills and two blocks on the night.

Emma Reardon, Senior, Thunderbird – In Thunderbird’s 3-0 sweep of Moon Valley on Monday, Reardon led the charge with 19 kills. She also had 13 digs and five aces.

Emma Soderstrom, Senior, Xavier College Prep – Soderstrom is back on the list again this week for her performance in Xavier’s 3-1 victory over Chandler on Thursday, when she had 19 kills, 17 digs and two aces.

Tiffany Tellez, Senior, Xavier College Prep – Tellez was one of the team’s star performers in the 3-0 rout of Basha on Tuesday. She had 14 kills and 14 digs to help lead the Gators to an easy victory.

Terrance Keyes, Senior, Gilbert – Setting a new personal record over the weekend, Keyes clocked in at 15:09.00 at the Desert Twilight XC festival.

Brenden Lines, Junior, Highland – Lines had a successful weekend at the Desert Twilight XC Festival, where he took first in the Boys Large School Open race with a time of 17:00.00.

Logan Marek, Senior, Ironwood Ridge – Competing in the Boys Sweepstakes race over the weekend at the Desert Twilight XC Festival, Marek was the top finisher from Arizona, coming in seventh with a time of 15:05.80, also setting a personal record.

Bryson Nielson, Freshman, Eastmark – At the Desert Twilight XC Festival over the weekend, Nielsen took home the gold for the Freshman Large School division, finishing with a time of 17:55.00.

Rustin Palmer, Freshman, Red Mountain – Palmer finished first in the Freshman Large School division at the Desert Twilight XC Festival, clocking in with a time of 18:25.00.

Mia Hall, Junior, Flagstaff – Setting a personal record at the Desert Twilight XC Festival over the weekend, Hall came in with a time of 17:22.50.

Lauren Ping, Junior, Desert Vista – Competing in the Girls Sweepstakes race over the weekend at the Desert Twilight XC Festival, Ping was the top finisher with a time of 16:40.40.

Kathryn Sewell, Junior, Highland – In the Girls Large School Open race at the Desert Twilight Classic, Sewell was able to take home the bronze against some tough out-of-state competition, finishing the race in 19:38.00.