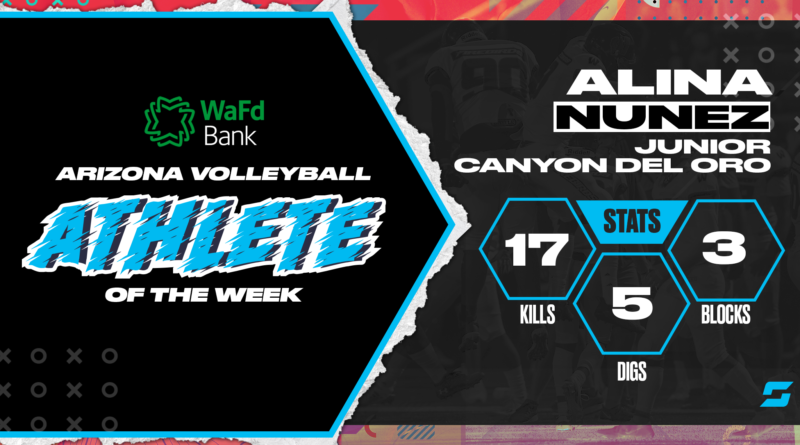 Nunez ran away with this week’s honor, receiving 76.47% of the total vote.

Layla Handley, Senior, Perry – Helping lead the team to a 3-0 victory over Highland, Handley had 11 kills, eight digs and an ace.

Shelbie Lemm, Sophomore, St. Mary’s – In Wednesday’s 3-0 rout of Poston Butte, Lemm led the game with 19 kills and tied for the most digs with 10.

Deziray Lopez, Sophomore, North – Lopez led the team’s performance Thursday to help the Mustangs defeat the Alhambra Lions 3-1. She had 18 digs, nine kills and an ace.

Tressah Moon, Senior, Flowing Wells – On Tuesday, Moon led the team with 18 digs and 14 kills while also snagging three aces to help boost her team to victory over Rio Rico.

Maren Matthews, Junior, Valley Vista – Back on the list again this week is Matthews, this time for her game-leading performance against Chandler on Thursday. Matthews had 17 digs, 11 kills and two aces to help the Monsoon defeat the Wolves 3-0.