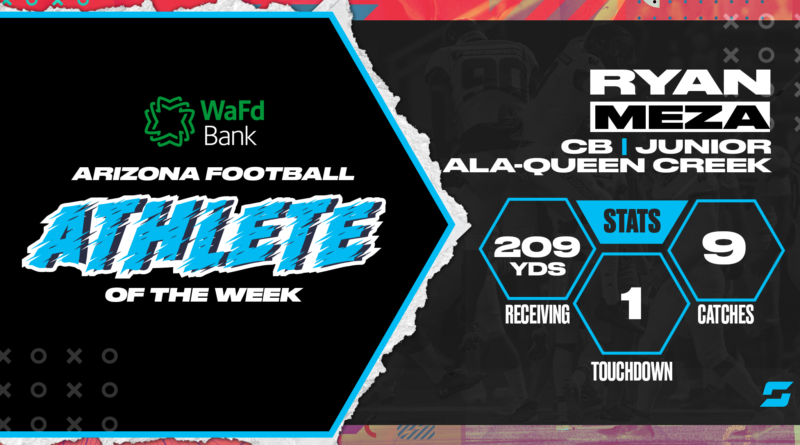 Racking up 209 yards and a touchdown on just nine catches, the junior helped propel his team to a 66-28 rout of Buckeye.

Bean unofficially racked up 247 yards on 30 carries, along with four touchdowns, to help lift the Falcons to a 34-16 win over Pueblo. (Stat Credit: Andy Morales, All Sports Tucson)

In only his third varsity game, Cherry led the Bobcats to a strong second-half rally against Salpointe Catholic. Despite the loss, Cherry’s passing performance ended up being one of the stronger ones in recent memory for Cienega. He completed 16 of 29 passes for 252 yards. (Stat Credit – Javier Morales, All Sports Tucson)

In the first half of the game, Eastwood had a rushing touchdown and two interceptions, one returned for a pick-six, to help Chaparral roll to a 63-28 victory over Higley. (Stat Credit: Ciaran Doyle)

Finch helped lead Mountain Ridge to a 39-35 win over Centennial with five passing touchdowns on the night, along with one he decided to punch in himself.

Greer’s performance was crucial to the Bruins’ 39-28 win over Cibola, with two touchdowns on the night, one of which was the go-ahead touchdown with less than a minute remaining. He then helped seal the win with a diving pass deflection on a fourth-and-goal.

After Chandler struggled early against O’Connor, Hipa led the team to a roaring second half. He attacked the air, with five passing touchdowns in the game, three of them coming in the second-half rally to come back and beat O’Connor 36-14. (Stat Credit: Jeremiah Sosa, azcentral)

In his second varsity game, Howell completed his first 14 passes before finishing 17 for 20 with more than 250 yards and three passing touchdowns to help “The View” defeat Sahuaro 26-7. (Stat Credit: Javier Morales)

The sophomore linebacker had another outstanding game Friday night, leading the team with eight tackles to help the Elks shut down the Morenci Wildcats 46-7. In four games, he has accrued 31 total tackles and has two interceptions.

Lynch had a phenomenal performance on offense and defense for the Bears on Friday. He had 366 yards on 18 carries for six touchdowns, a six-yard touchdown reception and a two-point conversion to score 38 of the team’s points in the 49-13 rout of Phoenix Christian. Defensively, he had six tackles and a sack.

A clutch interception by Martinez in the end zone with 31 seconds remaining helped the Lancers secure a 30-22 win over Cienega. (Stat Credit – Javier Morales, All Sports Tucson)

In what was possibly the most exciting game in the state so far this year, Marchiol helped lead the Huskies to a wild come-from-behind win over Bishop Gorman. Marchiol had nearly 200 yards through the air and more than 100 on the ground to help the Huskies stun the Gaels 25-24. (Stat Credit – Zach Alvira, East Valley Tribune)

An Ed Doherty Award Nomination Medallion recipient for his outstanding performance last week, Pando had another strong showing against Valley Lutheran this week. He led the team’s overall offensive attack with two touchdowns on the night, while also helping out defensively with a pick-six, accounting for 18 of the team’s 36 total points.

In a rivalry as fierce as ever, Wallace helped Liberty secure the 41-39 win over Sunrise Mountain with the game-winning touchdown in triple overtime. (Stat Credit: Richard Smith, West Valley Preps)

Beck had three catches for 135 yards and three touchdowns in a 34-27 loss to Poston Butte. He also had a handful of tackles and a near interception, just off his fingertips.