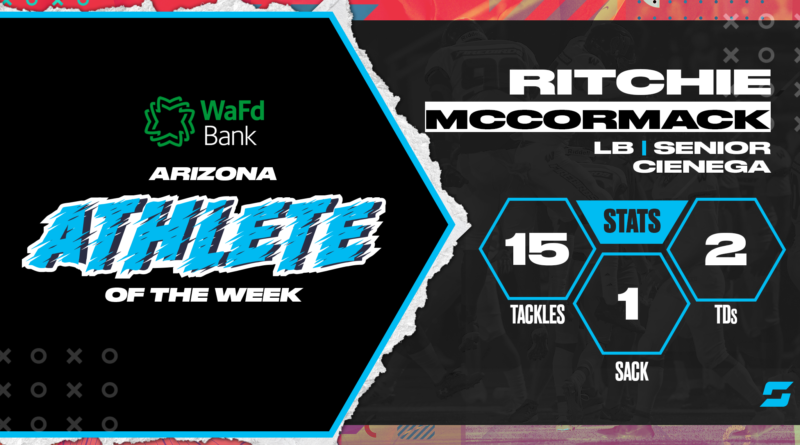 Abby Whatton, Senior, Canyon del Oro – Whatton had 10 kills and six aces in Tuesday’s match against Walden Grove to help lift the Dorados to a 3-0 victory.

Gabriella Romero, Junior, Cesar Chavez – Romero had a career-high 32 assists, along with 14 digs, three aces and a kill, to help lift the Champions to a 3-0 victory over Cibola.

Tiffany Tellez, Senior, Xavier College Prep – Xavier has a senior-heavy squad full of standouts, but Tellez’s overall performance Tuesday in the 3-1 victory over Chaparral earned her the nomination. Tellez had 17 kills, three aces, 20 digs and an assist.

Tatum Longnecker, Junior, Arcadia – The Titans fell to the Chaparral Firebirds 3-1, but Longnecker still had an outstanding performance despite the loss, leading the team with 33 assists, 19 digs, two kills and a block.

Sam Gloria, Junior, Deer Valley – Gloria set a career high with 22 kills in the 3-1 win against Greenway on Wednesday to go with her three aces and 13 digs.

Maren Matthews, Junior, Valley Vista – An instrumental part of Valley Vista’s 3-1 win over Liberty on Thursday, Zamora had 25 digs, nine kills, a block and an ace.

Libby Shields, Senior, Marana – Shields took first place in the three-mile race in the quad meet Wednesday, clocking in with a time of 21:52.00, putting her at the top of the list for the fastest time so far this season in Arizona.

Kylie Wild, Junior, Salpointe Catholic – Wild put herself at the top of the 2021 stat books for the girls 5000 meter race Saturday at the Fountain Hills Invitational, crossing the finish line in just 17:29.15.

Emma Baugh, Junior, Highland – Edging out her competition by just over a second, Baugh took first place in the Western Equinox XC Festival, coming in at 19:01.20.

Jon Barney, Senior, Veritas Prep – Barney won the 5K at the Fountain Hills Invitational over the weekend with a time of 15.20:77, placing him at the top of the state’s overall leaderboard.

Mekhi Steuber, Senior, Dobson – It was an explosive night for the senior running back in the 61-7 victory over Alhambra. Steuber rushed for more than 100 yards, while also putting up five touchdowns, on just 12 carries.

Ethan Moore, Senior, Chandler – The Wolves made it 38 consecutive wins Friday, defeating Cherry Creek High School (CO) 17-7 with Moore at quarterback. While it was a highly defensive game, Moore’s achievements given the circumstances were a significant feat. After the team’s starting quarterback was too sick to play, coach Rick Garretson gave Moore the nod. In his first start with the team, he completed 12 of 15 passes in the first half for just under 140 yards.

Kiko Trejo, Senior, Amphitheater – Eight plays was all it took this senior to make a statement. He put up approximately 345 all-purpose yards and five touchdowns to help Amphitheater beat Sahuarita, 42-27.

Aiden Rodriguez, Junior, Douglas – Despite being the team’s starting quarterback, Rodriguez had only ever played baseball and golf until July. You wouldn’t have known that if you watched him play Friday, as he helped his team defeat Bisbee, 24-21.

Timmy Allen, Junior, Mountain Pointe – A clutch interception from the defensive back helped Mountain Pointe down Brophy 26-23 to lead the Pride to a 2-0 start to the season, something they haven’t done in years.

Taj Hughes, Senior, Brophy – Despite his team’s 26-23 loss to Mountain Pointe, Hughes can say he gave it his all. He had 45 yards on eight carries, along with 13 receptions for 136 yards and two touchdowns.

Jolani Turner, Senior, Westwood – The running back had 100 yards and three touchdowns on 16 carries to help the Warriors defeat the Paradise Valley Trojans 55-12.