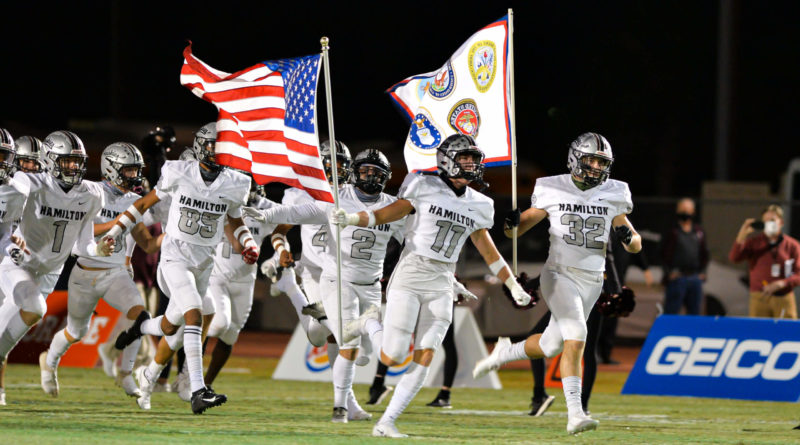 One of Arizona’s elite teams, the Hamilton Huskies, will be looking to break into the national rankings with a win over No. 12 Bishop Gorman of Las Vegas on Friday night.

When the sun begins setting over the Valley’s skyline, students, parents and football fans from across the state will be pouring into Jerry Loper stadium to see the show. While the temperature outside might start to cool once the sun sets, the heat within the stadium will just be getting started.

For the third time in the past two years, Hamilton will be playing in a nationally televised game. A solid performance by the Huskies would help solidify the strength of Arizona high school football on a national level.

Both teams are absolutely stacked with talent, but the edge goes to Bishop Gorman. Four of Nevada’s consensus top-five recruits in the class of 2022 are Gaels, all with four-star rankings and an impressive list of offers. Hamilton has one player among Arizona’s top-10 for the class of 2022.

Bishop Gorman’s Cyrus Moss, a 6-foot-6 defensive end committed to Oregon, is listed among the top players in the nation for his position and will look to wreak havoc up front for the Gaels. Downfield, cornerback and USC commit Fabian Ross will look to team up with Nevada’s top-overall prospect in safety Zion Branch to make it a “no-fly zone.”

Those players are just in the senior class. The three top juniors in the class of 2023 all attend Bishop Gorman, as well. Helping to beef up the already massive defense are four-star prospects Justyn Rhett and Kodi Decambra. Rhett, a safety, has orally committed to Notre Dame, while Decambra is uncommitted with a wide list of offers, including one from Arizona State.

The lone offensive player for either class to be ranked among the top recruits in Nevada is wide receiver Zacharia Branch. The four-star USC commit is rated as the top recruit in the state for 2023 and is ranked No. 44 overall nationally.

Hamilton is not short on firepower, either. Despite losing a few top players in the offseason, the Huskies still boast quite the roster. Unlike Bishop Gorman, their strength lies in the offense.

The offense will be led by four-star quarterback Nicco Marchiol, a West Virginia commit and the third-ranked player in Arizona for the class of 2022. Joining him to boost offensive productivity is three-star tight end and Michigan State commit Michael Masunas. Just below Masunas on the list is three-star interior offensive lineman and University of Arizona commit Grayson Stovall.

Just below them and rounding out the list for Hamilton is Russell “Deuce” Davis II at No.15. The three-star University of Arizona commit helped make a name not only for himself, but for his team with his outstanding performance last year on the big stage. His stellar defense helped lift Hamilton to a 13-7 victory over Saguaro and all but guarantee an invitation to the Open Division playoffs.

Should Hamilton shine on the big stage and pull off a victory, it certainly would solidify a spot in the top-25 national rankings, among opening numerous other doors. Some of those doors could include scholarship offers for athletes who perform against one of the nation’s premier teams.

It also would provide additional confirmation about the athletes in the area. The Huskies have been the “little brother” of sorts to Chandler in recent years, struggling to get out of the Wolves’ shadow of dominance on the gridiron.

This Friday night, Hamilton will be faced with one of its biggest challenges to date in Bishop Gorman as both teams look to bring the national spotlight to their state’s football scene. Hamilton’s defense is going to need to have a big performance to keep it a close game, because the Gaels’ defense is going to be a tough one to crack. Kickoff time is set for 7 p.m. and the game will be broadcast live on ESPNU.