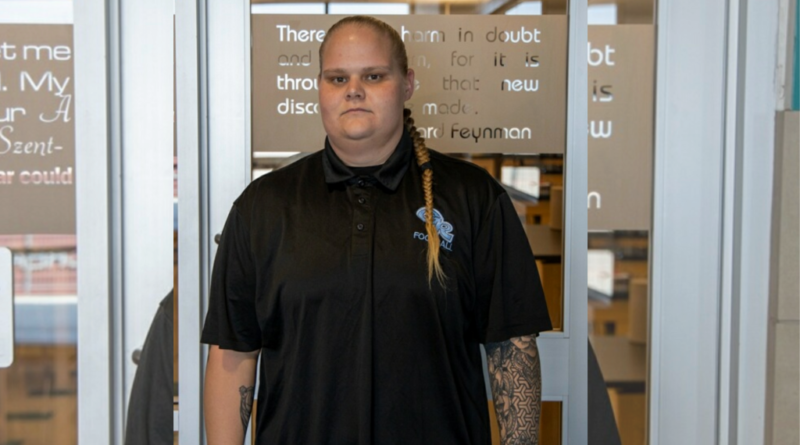 Gila Ridge is looking to continue building on the football program’s strong upward trajectory under newly appointed head coach Jessica Slaughter. She was approved to take over the helm by the Yuma Union district governing board last month after spending the previous four years with the program.

“I am honored to have the opportunity to lead the Gila Ridge football program,” Slaughter said. “As a coach who has been with the program for multiple years and an alumni of the school, I have always wanted to see our programs succeed and look forward to being a part of that continued success.”

A 2012 graduate of Gila Ridge, Slaughter participated in track and field for the Hawks before attending Alderson Broaddus University in Philippi, W.Va., to continue her athletic and academic pursuits. After returning to her roots in Yuma, she began teaching at Gila Ridge High School, igniting her inner Hawk pride.

Before the start of the 2017 season, she was asked by then-varsity head coach Corey Semler to join the staff as the freshman head coach. Slaughter held that position for three years before joining the varsity staff as the defensive line coach before the 2020 season.

“It is great to have an alumni come back to where she started and help continue a great program here at Gila Ridge. She will definitely inspire our young adult students to come back to our Hawk community,” Gila Ridge athletic director Joseph Kapugia said.

“I would say that I have worked with roughly 80 percent of the current athletes in our varsity program in the past four years,” Slaughter said.

Jonathan Noriega, a senior and multisport athlete at Gila Ridge, has had the opportunity to work with Slaughter quite a bit during his time as a Hawk. Noriega is pumped to open his senior season with Slaughter and believes in the value she brings to the community.

“Coach Slaughter is not only an amazing coach on the field, but a spectacular person off the field,” Noriega said. “I’ve had her as a role model all throughout high school as she’s been coaching me through every year of play, not only in football but track and field, which goes to show how committed she is to our program.”

The football program has experienced success in recent years, most recently reaching the 4A semifinals in 2019 and finishing that season with an 11-2 record. For the Hawks, a fairly high standard has been set, and the hiring of Slaughter shows the administration has faith in her coaching style and ability to maximize each player’s potential.

“We are hoping that the program will have continued success under her tutelage — continue to build a culture of integrity, responsibility and respect,” Kapugia said.

Slaughter believes what truly sets her apart from a number of other coaches is her commitment to the student-athletes, her deep connection to Gila Ridge and her overall involvement with students on campus. Not only has she been involved with the football program in her time back at her alma mater, she also is the girls wrestling coach as well as the head track and field coach.

“Having the opportunity to work with students outside of the classroom has also helped to strengthen those relationships inside the classroom,” Slaughter said. “Working with so many athletes around campus definitely has an impact on the school’s culture.

“I hope that my influence has helped to improve the culture of our programs and that each student-athlete walks away knowing they have the ability to meet any and all of life’s challenges head-on.”

Added Kapugia: “Coach Slaughter will have a positive impact on the community because she is such an optimistic person that wants to help the football team go to the next level of success. She will bring consistency to the program.”

While Slaughter did not apply for the job because she wanted to put her name in history books, she’s inevitably breaking barriers by fearlessly pushing forward in pursuit of her goals. She is believed to be the first female head football coach at a large school (4A-6A) in Arizona history.

“I applied for this position because of my love for the sport and my desire to work with the athletes to continue this program’s success,” Slaughter said. “Taking this position is not about me, it’s about the kids. If people want to look at me as some sort of inspiration, then that’s great, but I don’t think people should go into a position just because they want to be the first to do something.”

Noriega, however, knows how much she means to the community. He believes by Slaughter forging her own path and believing in her abilities despite what some might see as gender barriers, she will inspire young women to take chances and believe in themselves.

“The hiring of Coach Slaughter will definitely have a huge impact on young girls in Yuma County,” Noriega said. “I feel it’ll give these young women more strive to reach for bigger goals in their field of desire.”