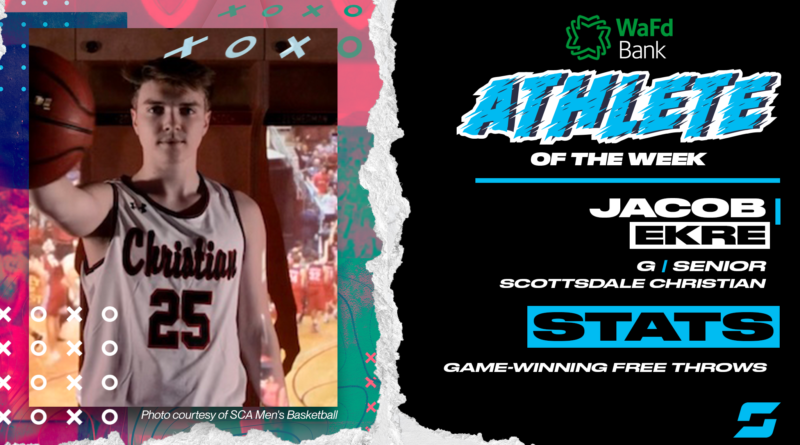 The senior helped lift Scottsdale Christian to a 49-48 win in the 2A final after he was fouled on a three-point shot with less than a second left. He made all three free throws to give the team the victory over Rancho Solano Prep.

Ekre ran away with this week’s honor, receiving 82.41% of the vote.

Styles Phipps, St. Mary’s: The freshman had a solid performance Saturday all across the court. While he struggled a bit getting shots to fall, he still was able to rack up nine points and made shots when he needed to most to help St. Mary’s pull ahead late. He also had five steals, four assists and three rebounds, playing an essential role in the 50-47 victory in the 4A final.

Stuart Sandall, Page: Sandall, a senior, led the team in scoring while putting up an impressive double-double with 19 points, 10 rebounds, an assist and a steal. He also had three blocks to help Page defeat Snowflake 64-51 for the 3A title.

Jalen Scott, Paradise Honors: The senior gave nearly a full 32-minute effort, putting up 11 points, seven rebounds, an assist and a block for Paradise Honors in a 50-47 loss to St. Mary’s in the 4A championship game.

Tru Washington, Mountain Pointe: Roosevelt, a sophomore, helped the Pride stay neck and neck with Sunnyslope for a majority of the 6A championship game with 16 points, six rebounds and five steals in the 63-62 loss.