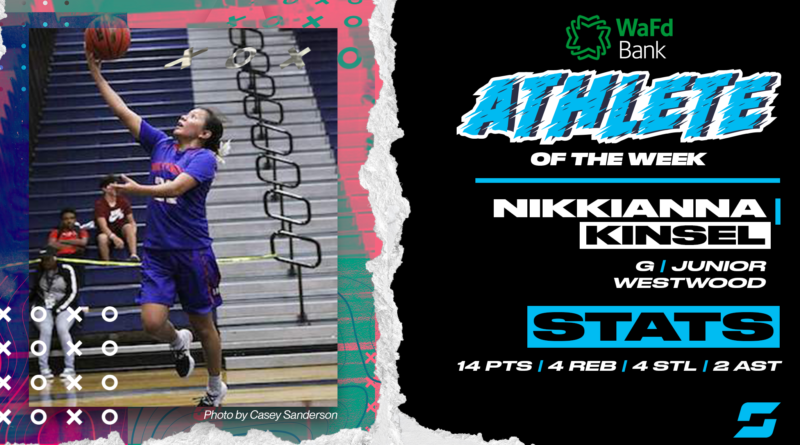 Kinsel ran away with this week’s honor, receiving 69.12% of the vote.

Leamsi Acuna, Flowing Wells: Acuna, a sophomore, nearly had a double-double Friday with 20 points, nine rebounds, four assists and two steals to help No. 5 Flowing Wells knock off No. 4 Cactus Shadows with a 67-61 victory.

Amanda Barcello, Seton Catholic Prep: A solid contributor all across the court each night for the Sentinels, the senior joined the 1,000 career points club Friday while helping Seton Catholic defeat Coconino 64-31.

Isabella Barrett, Verrado: Barrett, a sophomore, helped lift the Vipers to a 50-40 victory over Sunrise Mountain on Friday, leading the team in scoring with 16 points.

Victoria Cazares, Pueblo: The team’s top performer all season, Cazares had another strong showing Tuesday despite the team’s 52-30 loss to Deer Valley. Cazares, a sophomore, put up 21 points, two rebounds, two steals and a block. She also was named the team’s MVP of the season for the second season in a row.

Tatyanna Clayburne, Williams Field: In the final appearance of her high school career, the senior led the team in scoring Friday with 17 points in a 50-41 loss to Millennium.

Nicole Evenson, Gilbert: On a team with no seniors, Evenson is thriving as one of the team’s leaders. The junior once again stepped up Friday, posting 13 points, eight assists, three rebounds and three blocks to help Gilbert defeat Paradise Valley 61-36.

Alaya Fitzgerald, Mesquite: In Friday’s game against Notre Dame Prep, the senior helped lead Mesquite to a 36-32 win with 23 points.

Avery Graber, Paradise Valley: Posting her 11th double-double of the season Tuesday, the sophomore led the team in scoring with 23 points and had 21 rebounds despite the team’s 76-52 loss to top-ranked Casteel.

Elli Guiney, Millennium: The standout freshman had a game-high 19 points — 17 in the first half — as the Tigers defeated Williams Field 50-41 on Friday.

Sarah Miller, Xavier: The freshman had a game-high 14 points against Mesa on Friday, helping the Gators chomp to a 40-30 victory.

Priscila Varela, Mesquite: Varela, a senior, led the team in scoring Tuesday with 18 points and had four steals to help Mesquite roll to a 64-27 victory over Poston Butte.