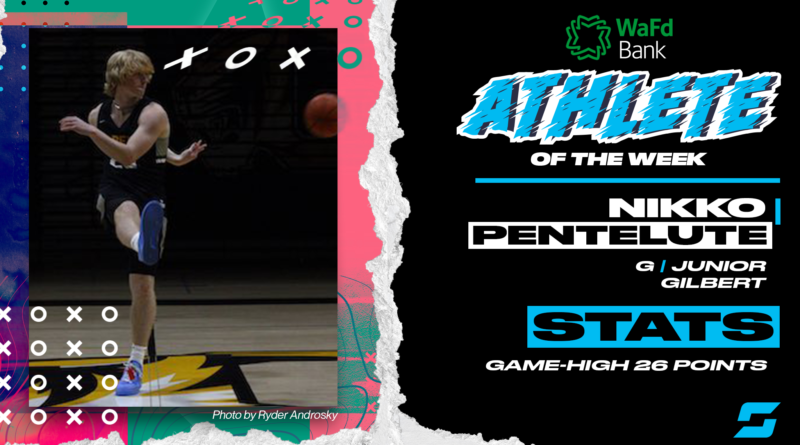 Putting up a game-high 26 points Saturday, the junior helped lead the Tigers to the semifinals with a 71-60 victory against Sunrise Mountain.

Pentelute ran away with this week’s honor, receiving 84.44% of the vote.

Bailon Black, Ironwood: Dropping a double-double with 20 points and 10 rebounds Saturday, the senior helped lift Ironwood to a 75-60 victory over Desert Mountain.

Nico Castaneda, Salpointe Catholic: The senior knocked down the winning shot with just under five seconds left Saturday to lift the Lancers to a 63-61 victory over Deer Valley.

Colin Carey, Sunrise Mountain: Carey, a senior, closed his career Saturday with 22 points, 16 of them coming in the second half, in a 71-60 loss to Gilbert.

Patrick Chew, Brophy: In the Broncos’ 70-66 win over Liberty on Saturday, Chew led the team in points and rebounds, with 18 and 10, respectively. The junior was 7 for 10 from the line.

Miles Guliford, Liberty: The senior led the team in scoring with 19 points Thursday to help Liberty win its first 6A playoff game, 102-84 against Desert Vista.

Grady Lewis, Sunnyslope: It was a dominant game Thursday inside the paint offensively and defensively for the senior, who helped the Vikings advance to the semifinals by posting 35 points and 12 rebounds in a 73-58 victory over Corona del Sol.

Jake Lifgren, Centennial: The junior had an explosive game for Centennial on Saturday, posting a game-high 28 points and six rebounds to help power the Yotes to a 67-55 victory over Cactus Shadows.

Trenton McLaughlin, Basha: The senior and Basha’s leading scorer continued to do what he does best Thursday, putting up 25 points to help the Bears knock off Highland 61-52.

Preston Olney, Coconino: In Coconino’s 45-34 victory over Mesquite on Saturday, the senior had 16 points, three rebounds, two assists and three steals to help the team advance to the semifinals for the first time since 1989.

JJ White, Ironwood: The senior set a record for wins during his career at Ironwood, surpassing the previous record of 83 and advancing to 84-22 overall, in Saturday’s 75-60 win over Desert Mountain. He also set the record for three-pointers made, knocking down 207 with at least one game remaining.