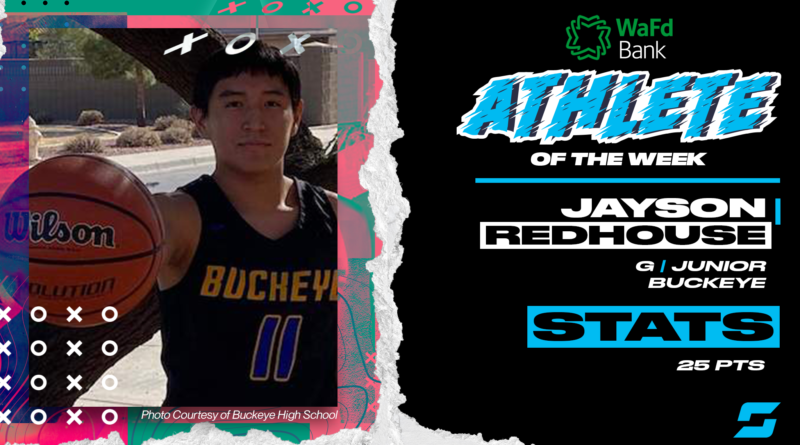 Redhouse, a junior, led the team in scoring with 25 points in a 74-68 loss to Flagstaff.

Redhouse ran away with this week’s honor, receiving 67.03% of the vote.

Ringo Aguek, Ironwood: In Monday’s 72-55 rout of Sunrise Mountain, the senior had a game-high 25 points and seven rebounds to help lead his team to victory.

Amare Arbizu, Raymond S. Kellis: In his best performance of the season, the senior had 21 points, four rebounds and two steals despite the team’s 75-53 loss to Ironwood on Tuesday.

Devin Begay, Cibola: Saving his best for last, the junior exploded to post 20 points, seven rebounds, three assists and two steals to help power Cibola to a 66-64 victory over Westwood on Friday.

Jordan Bombolis, Apollo: Bombolis, a senior, had his best game of the season with 23 points and three rebounds to help Apollo pull off a 64-57 win over Sunrise Mountain on Thursday.

Shay Cain, Desert Edge: The senior continues to be the team’s sparkplug, with more outstanding performances this week. On Wednesday, he helped lead Desert Edge to a 78-53 rout of Verrado on the road, posting 23 points, eight rebounds, four assists, two blocks and a steal. He closed the season Friday with a similar outing, putting up 23 points, seven rebounds, four assists, two steals and a block to help Desert Edge defeat Peoria 79-61.

Colin Carey, Sunrise Mountain: Despite Monday’s 72-55 loss to Ironwood, the senior led the team in scoring with 23 points and had six rebounds. On Tuesday, he helped lift the Mustangs to a 79-72 victory over Gila Ridge with 21 points, seven rebounds, four assists, one steal and one block. He closed the regular season Thursday against Apollo with 23 points and nine rebounds in a 64-57 loss.

Steven Cervantes, Mesa: The senior had 20 points, four assists and three steals Tuesday to help the Jackrabbits secure a 65-54 win over Westwood.

Brett Chappell, Liberty: In the senior’s most explosive game of the season, Chappell posted a game-high 32 points along with six rebounds and an assist to help Liberty defeat Pinnacle 97-74 on Tuesday.

Tanner Crawford, Mesa: On Tuesday against Westwood, the senior had a game-high 21 points, 13 rebounds, five blocks, two steals and two assists to help lift the team to a 65-54 victory.

Bradley Curtis, Thatcher: The sophomore had a season-high 31 points, along with 14 rebounds, to help Thatcher defeat San Tan Valley 79-66 on Thursday.

Masai Dean, Cholla: Despite the Chargers’ 63-47 loss to Pueblo on Tuesday, the sophomore led the game in scoring and nearly secured a double-double with 20 points and nine rebounds.

Allan Escobar, Willow Canyon: Making his first appearance on the list, the senior had an explosive game Thursday with 31 points and six rebounds to help the Wildcats pounce on a 95-37 victory over Independence.

Rene Felix, Rincon/University: In only his fifth appearance of the season, the senior had his best game Tuesday against Sabino. In the narrow 73-71 victory, Felix led the team in scoring with 32 points, and he added eight rebounds and three steals.

Cohen Gonzales, Mesquite: Gonzales, a sophomore, continues to be one of the team’s strongest shooters as the team prepares for the playoffs. On Tuesday, he had a game-high 27 points, seven rebounds, six assists and four steals to help the Wildcats down the Saguaro Sabercats 79-52.

Hudson Griffin, Thatcher: Leading Friday’s game against San Tan Foothills in scoring, the junior had a season-high 25 points and 16 rebounds to help Thatcher get a 66-62 victory.

Amarei Hunter, Desert Edge: With 22 points, eight rebounds and three assists, the senior had one of his strongest games of the season Friday to help Desert Edge defeat Peoria 79-61.

Isaac Hymes, Millennium: Hymes, a sophomore, led the game in scoring Thursday against Canyon View, with 24 points and 10 rebounds, to help the Tigers cruise to a 76-43 victory.

Memphis James, Coconino: The sophomore had a chance to shine Tuesday in the game against Mohave, putting on his best performance of the season. He led the team in scoring with 23 points, also racking up five rebounds, five assists, three steals and a block to help Coconino defeat Mohave 78-26.

Carson Kelly, Chandler: Despite the senior’s best efforts with 30 points, four assists and three rebounds, the Wolves fell to the Brophy Broncos 69-54 on Tuesday. He then posted 31 points, seven rebounds, four steals and three assists in a 74-59 loss to Desert Vista on Thursday.

Josh Lenners, Flagstaff: In the senior’s most explosive game of the season, Lenners put up 23 points, four rebounds, two assists and two steals to help the Eagles defeat Buckeye 74-68 on Tuesday.

Isaac Lujan, Combs: Putting a cap on his career, the senior helped power Combs to a 59-56 victory over Poston Butte on Friday with 23 points, seven rebounds, six assists and two steals.

Max Majerle, Arcadia: Majerle, a senior, had a season-high 29 points and 13 rebounds to help Arcadia defeat Washington 60-42 on Monday.

Daryian Matthews, Dysart: The senior continued to crash the boards last week, with a whopping 32 points and 26 rebounds, paired with three blocks and two steals, in Dysart’s 75-72 loss to Willow Canyon on Wednesday. Closing the regular season Friday and helping ensure his team a postseason appearance, Matthews led the game in scoring with 27 points and 23 rebounds to help Dysart slide past Buckeye 66-65.

Malik Payton, Florence: On Tuesday, the senior had an outstanding 41 points, 12 rebounds and four steals in an 85-64 loss to Valley Chsitian. On Friday, he closed the regular season with 23 points and 11 rebounds in a 51-49 loss to Winslow.

Corey Perry, Peoria: In the final game of his high school career Friday, Perry tied for the most points in the game with 23. The senior also posted four rebounds and three steals despite the 79-61 loss to Desert Edge.

Derrek Rawlins, Kingman: Rawlins, a senior, had his best game of the season, posting 33 points, seven rebounds, three assists and two steals despite the team’s 81-66 loss to Tonopah Valley on Thursday.

TJ Reed, Thatcher: Despite the team’s 58-55 loss to Pima on Monday, the junior had a season-best performance with 22 points, four rebounds, three assists and a block.

Dustin Richard, Winslow: Helping Winslow to a 51-49 victory over Florence, the senior had 23 points, seven rebounds and two steals Friday to close the regular season.

Chino Salas-Zorrilla, Camp Verde: The junior made a strong push to finish the regular season for Camp Verde, starting in a 61-59 win over Northwest Christian on Monday. Salas-Zorilla posted 31 points, four rebounds, four steals and three assists to help lift the team to victory. On Tuesday, he followed with 25 points, seven steals, five assists and three rebounds to help Camp Verde defeat Tonopah Valley 70-38. He closed the regular season with 38 points and eight rebounds Thursday in a 68-65 loss to Winslow.

Kamden Sekaquaptewa, Saguaro: One of his strongest performances of the season, the senior captain posted 20 points, four assists and two blocks despite the Sabercats’ 79-52 loss to Mesquite on Tuesday.

Kameron Steward, Coolidge: On Tuesday, the senior had his highest-scoring game of the season with 21 points and 10 rebounds to help Coolidge defeat Rio Rico 73-56.

Pike Tancil, Willow Canyon: The junior has been absolutely on fire this season, with nearly another triple-double in Tuesday’s 83-53 victory over Washington. He posted 23 points, 10 assists, eight rebounds, two steals and a block to help the Wildcats finish the final stretch of the regular season strong.

Elijah Thomas, Valley Vista: It was another strong week for Thomas, a senior who posted 21 points and seven rebounds against Shadow Ridge on Tuesday in a 73-32 victory.

Nehemiah Washington, Marcos de Niza: Washington, a senior, had one of his best performances of the season Monday, putting up 21 points and eight assists to help the Padres defeat Agua Fria 76-55.

Roosevelt “Tru” Washington, Mountain Pointe: Finishing the regular season with a bang, the sophomore posted 29 points, eight rebounds and three steals in Tuesday’s 88-79 loss to Desert Vista. On Friday, he had a double-double with 27 points, 14 rebounds and a steal to help Mountain Pointe defeat Desert Ridge 65-57.

Jaylen Wesley, McClintock: The junior filled up the stat sheet in Thursday’s game against Horizon, putting up 25 points, nine rebounds, five steals and two assists to help the Chargers defeat the Huskies 83-62.

JJ White, Ironwood: It was another successful week to close the regular season for White. In Monday’s game against Sunrise Mountain, the senior posted 23 points, three rebounds and three assists to help lead the Eagles to a 72-55 victory over the red-hot Sunrise Mountain Mustangs.