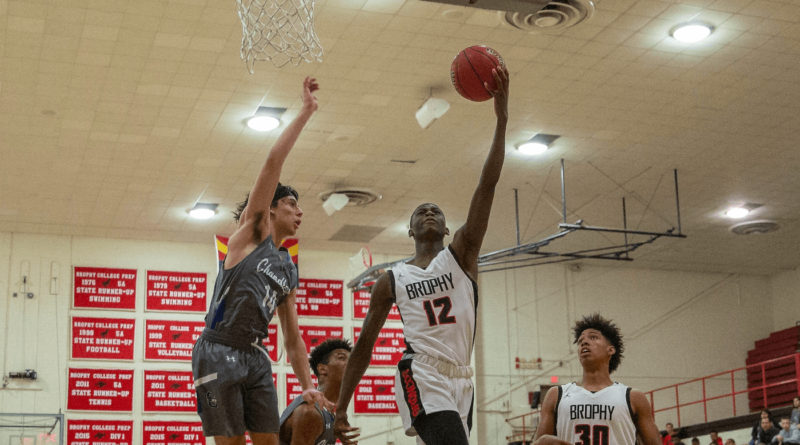 PHOENIX, Ariz. — The No. 4 Brophy Prep Broncos held off a pesky Liberty Lions squad for a 70-66 victory in a Class 6A boys quarterfinal Saturday at Brophy College Preparatory.

No. 5 Liberty ran a full-court press for nearly the entire game, but the Broncos were the first team in the postseason to beat it with consistency and knock off the Lions.

“We had the good fortune of playing a really tough schedule, so we’ve played a lot of closer games and a lot of really well-coached and good teams,” Broncos coach Matt Hooten said. “I can’t give (Liberty coach Mark Wood) and his staff enough credit for the job they’ve done. Their kids played really hard. Obviously, he’s got a tremendous culture there and I just think we came in with the experience of having played a lot of really good teams and a lot of close games and we were really able to pull it out in the end.”

After leading by 11, the Broncos found themselves in a tight game after the Lions made a layup to cut Brophy Prep’s lead to 66-65 with 30 seconds remaining. Liberty fouled junior point guard Miles Nash in the double bonus, and Nash was calm, cool and collected while sinking both free throws to put the Broncos ahead 68-65 and in position to win the game.

“Not much (was going through my head),” Nash said. “I’ve been practicing this for my whole life, and our coaches do an incredible job of helping us stay strong and motivated in the moment.”

Nash finished with 14 points and made all six of his free throw attempts. Hooten emphasized the importance of his players having been in similar situations in the past.

“That’s one of the benefits of having an experienced point guard who’s been in that situation before,” Hooten said. “He’s been at the line with the game on the line and has come through for us over and over again and obviously did that again tonight. That was a really big part of our success.”

With only one day to prepare for Liberty’s full-court press, Hooten was able to get his players sufficiently prepared to beat it, and they created several easy baskets on fast breaks because of it.

“Obviously, we were on a short turnaround,” Hooten said. “We had one day to prepare for it. I thought our guys really handled their pressure. I thought we played with poise, we moved the ball up the floor quickly, we were able to play for layups, and we didn’t settle for outside shots. I think that was a big part of our success.”

Between the pandemic and quick turnarounds for playoff games, the Broncos have learned to adapt to things quickly and take advantage of every opportunity on the court.

“It’s obviously been a longer journey than a typical year, but I really can’t say enough about our kids and how mentally tough they’ve been through this whole thing,” Hooten said. “They’ve been flexible, they’ve just rolled with everything as it’s happened, and obviously it’s been kind of a roller coaster in terms of whether the season was going to happen and what it would look like, but I can’t say enough how proud I am of them and the way that they’ve approached it and really just taking it one day at a time.”

Next for the Broncos is a rematch with No. 1 Sunnyslope in the state semifinals. Brophy Prep lost to the Vikings 67-60 on Feb. 5.

The Broncos aren’t looking ahead just yet, however.

“We haven’t talked much about the next one. We always tell our guys, ‘Enjoy it for tonight, and then we’ll worry about the next game tomorrow,’” Hooten said. “It’ll be a chance for our staff to go ahead and take a look at some film and see what we come up with. Obviously, they’re the No. 1 seed in the state for a reason. They’re a really terrific team and Coach (Ray) Portela is arguably the best coach in the state, so we know we’ll have our hands full on Thursday, but we look forward to taking the opportunity to compete.”

Said Nash: “I’m going to enjoy this one tonight, and then by tomorrow, we’ll have a good amount of motivation. I think both teams will be prepared, so it should be a great game.”

For the Lions, it was the end to a great run. They finish the season 17-3, knocking off defending 6A state champion Desert Vista in the opening round in a shootout before losing another thriller against the Broncos, one of the best teams in the state.

Liberty coach Mark Wood had nothing but praise for his players.

“Results don’t matter,” Wood said. “I’m proud of this team, no matter what happens. They’re fighters, they’re tough kids, and they’re just unbelievable human beings. They fought their tails off, and I’m just thankful they allowed me to come along for the ride. This was a player-led team the whole way and I’m proud of them.”

Wood added that his team was “selfless” through the COVID-19 season with a “no-excuse” attitude.

“They were everything a coach could dream of,” Wood said. “I love them.”