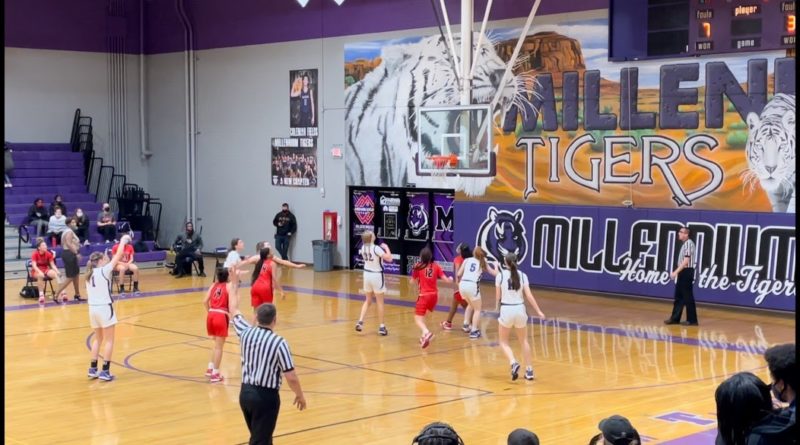 The third-seeded Millennium Tigers are continuing the hunt for yet another state championship as they advanced to the 5A semifinals with a 50-41 victory over No. 6 Williams Field on Friday at Millennium High School.

While a return to the state final might seem like a given for the powerhouse program, what’s surprising is the source of the spark for the team: freshman Elli Guiney.

“It’s awesome, because it’s a family here, so everyone is super supportive and there’s not much jealousy,” Guiney said. “We just come in and practice every day, and we battle against each other, so when I go out in the games, I know I can compete because I’m competing against Kassidy (Dixon) every day.”

Guiney had a game-high 19 points Friday — 17 in the first half. She started the game on fire, helping the Tigers jump out to a 9-1 lead. It was 10-6 after one quarter.

Opening the second quarter, sophomore Cynthia Lopez found a wide-open Guiney, who buried a three-pointer. Williams Field found a rhythm, though, and cut the deficit to 15-13 near the midway point of the period. Junior Reagan Grimsley helped the Tigers build the lead back to 20-13 before going down at halfcourt with a knee injury.

“Replacing Reagan is going to be really hard to do,” Millennium coach Kevin Thomas said. “She kind of did a little bit of everything for us, and it went unspoken where it was one of those things where it was just, ‘Raegan will handle it.’

The already young Tigers, who had only two juniors and two seniors to start with, were now without a key component of the team and one of their upper-class leaders, but they didn’t let it discourage them. Millennium closed the half with a 22-18 advantage, knowing there’s more they could be doing to improve.

“They’re young, but together, they’ve played, like, ten-thousand games of basketball,” Thomas said. “So, they kind of relish this moment. At times, I think our inexperience has shown up a little bit, but I think they’re ready to roll when the big lights come on.”

Millennium made some adjustments at halftime and again got off to a roaring start in the third quarter, quickly racing to a 27-18 lead. Black Hawks senior Tatyanna Clayburne and junior Anyah Woods picked things up for Williams Field, closing it to a 35-30 gap at the end of three.

Dixon, a senior, took over the offense in the second half for Millennium and helped the team close out the game. Of her 11 points, seven came in the final quarter. She found herself at the free throw line quite a bit, where she was clutch for the Tigers, knocking down 9 of her 10 attempts.

“She’s a great person to be around,” Guiney said of her teammate. “She helps me out with tips, always is pushing me at practice. She doesn’t give me plays off or anything; she’s always battling with me, but it’s awesome.”

Millennium will face No. 2 Verrado on Wednesday. It’s a much-anticipated game, as the teams split the regular-season series, with the Tigers winning in January and the Vipers winning in February.

“We struggled a little bit earlier in the year and played some really good teams, but at no point did their mindset or demeanor change,” Thomas said.

“The wins or losses don’t necessarily define it; it’s just about getting better, and honestly, that’s still what we need to do.”

While Williams Field’s season is finished, Black Hawks coach Taura Gardner couldn’t be more thrilled with the effort put forth by her team this season and what her players were able to achieve.

“They played with so much heart, because we weren’t supposed to do anything,” Gardner said.

Williams Field suffered the loss of a handful of players in the offseason, whether because of families relocating, prep school transfers or the decision not to play because of COVID-19 concerns. When the Black Hawks opened the season 5-2, it was the program’s best start since 2009. It was also before key transfers such as Clayburne were eligible.

“We have a freshman that just moved in, a sophomore that’s never played any varsity minutes, so for them to be able to hold on that time was amazing for us,” Gardner said.

“Every year we’re going to continue to get better and go forward.”