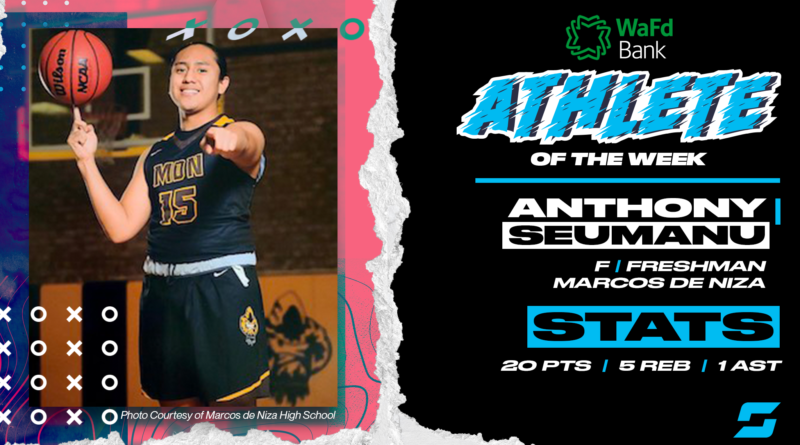 In a 64-29 win over Barry Goldwater on Tuesday, the freshman had his highest-scoring game of the season with 20 points, five rebounds and an assist.

Garrett Anderson, Sandra Day O’Connor: Despite the Eagles’ 64-52 loss to Valley Vista on Wednesday, the senior had a double-double with 26 points and 10 rebounds.

Chuck Bailey, Higley: The sophomore led the Knights in scoring Tuesday, putting up 20 points, five assists, three rebounds and a block despite Higley’s 80-68 loss to Paradise Valley. On Friday, he had a triple-double in a 107-51 victory over Washington with 21 points, 11 steals and 10 rebounds.

Brody Bobzien, Greenway: Bobzien is heating up as the season progresses. Against Cactus on Monday, the senior led both teams in scoring with 21 points, five assists, four rebounds, two steals and a block despite the Demons’ 60-48 loss to the Cobras.

Davion Butler, McClintock: One of two Chargers to post a double-double in Tuesday’s 87-77 victory over Thunderbird, the sophomore had 24 points and 10 steals.

Cougar Cooke, Show Low: Another solid week of performances from Cooke, starting with his game against Blue Ridge on Tuesday. The junior had 22 points, six rebounds, three assists and three steals despite a 58-56 loss.

Tanner Crawford, Mesa: Crawford, a senior, had another game that nearly matched his season best Thursday against Shadow Ridge in a 67-43 victory. Posting a double-double with 21 points and 17 rebounds, he also had three steals and a block.

Moses Demalek, Paradise Valley: In Tuesday’s 80-68 victory over Higley, Demalek had his best game of the season so far. The senior had a triple-double of 30 points, 15 rebounds and 10 assists.

Jason Fontanet, St. Mary’s: Fontanet, a sophomore, posted a double-double with 24 points and 10 rebounds to help St. Mary’s down Mountain Pointe 70-40 on Thursday.

Oakland Fort, Sunnyslope: The senior took things to the next level in Tuesday’s game against Desert Ridge, posting 35 points, three rebounds, two assists and two steals to help the Vikings defeat the Jaguars 67-53.

Cohen Gonzales, Mesquite: The sophomore is continuing to be the leading force for the Wildcats. On Monday, he posted 26 points along with five steals to help Mesquite beat Seton Catholic Prep 65-62.

Collin Hasenstab, Coronado: After transferring from Sunnyslope and being forced to miss half the season, Hasenstab had his most explosive performance of the season against Vista Grande on Friday night. Helping the Dons take the 56-32 win, the junior had 26 points, eight rebounds and three blocks.

Jonah Holiday, Page: Holiday, a senior, put up a season-high 20 points, along with four rebounds and an assist, despite a 63-52 loss to Coconino on Saturday.

Amarei Hunter, Desert Edge: The senior had his best performance of the season in the Scorpions’ 68-61 loss to Paradise Honors on Wednesday, putting up 24 points and eight rebounds.

Aadem Isai, Valley Vista: Continuing to be one of the leaders for the Monsoon, the senior had his best game of the season Tuesday against Maricopa, dropping 28 points, four rebounds and two steals to help Valley Vista beat Maricopa 75-42.

Brock Jackson, Sabino: The senior led the game in scoring Monday despite the team’s 71-42 loss to Salpointe Catholic, putting up 26 points and eight rebounds.

Colton Jett, Dysart: In Tuesday’s game against Coronado, the senior led both teams in scoring with 21 points to go with four steals, four assists and three rebounds, helping the Demons win 54-45. He had another 21-point game Saturday, along with four assists, three rebounds and three steals, to help Dysart down Barry Goldwater 68-49.

Carter John, Bradshaw Mountain: John, a senior, had an explosive game against Cactus on Wednesday, putting up 24 points, five rebounds, two assists and two steals in a 54-42 win.

Jediah Jones, Higley: With his first double-double of the season, the senior’s 22 points and 10 rebounds Friday helped Higley defeat Washington 107-51.

Carson Kelly, Chandler: In a 54-53 victory over Basha on Monday, the senior posted 23 points, seven assists, five steals, three rebounds and a block. He followed with 29 points, nine assists, five steals and four rebounds to help the Wolves down Mountain Ridge 80-63 on Tuesday.

Steven Legleu, Nogales: In his best game of the season so far, Legleu had 25 points, five rebounds, four steals and two assists to help the Apaches defeat the Rincon-University Rangers 64-58 on Tuesday. The senior led the team in scoring Thursday with 22 points, six rebounds, five assists and three steals despite a 79-56 loss to Buena.

Daryian Matthews, Dysart: With another insane double-double of 22 points and 20 rebounds, the senior’s control of the boards helped power Dysart to a 72-52 victory over Youngker on Friday.

Ahamed Mohamed, Apollo: One of two players to post 20 or more points for the Hawks on Tuesday, the senior had a double-double with 20 points and 12 rebounds despite the 88-83 loss to Liberty.

Shamar Moore, Peoria: Making his first appearance on the list, the junior had his best game of the season against Prescott despite the team’s 90-70 loss with 22 points, eight rebounds, six assists and three steals.

Seve Moreno, Estrella Foothills: Back on the list once again is Moreno for his performance Friday to help the Wolves cruise to a 90-33 win over Yuma. The senior had 22 points, eight steals and six assists.

Johny Olmsted, Estrella Foothills: Even with a stellar performance from Moreno, Olmsted led the team in scoring with 25 points in Friday’s 90-33 victory over Yuma. The junior had seven rebounds, five steals and two assists.

Milap Owens, Prescott: In perhaps his best game of the season, the senior posted 26 points, six assists and four rebounds to help the Badgers defeat the Panthers 90-70 on Tuesday.

Jason Parent, Prescott: In his most explosive game of the season so far, the junior posted 29 points, eight rebounds, three steals, two blocks and an assist to help the Badgers down the Panthers 90-70 on Tuesday.

Chase Pavey, Sunrise Mountain: Pavey, a senior, had his highest-scoring game this season Tuesday in a 66-53 win over Cactus Shadows. He had 20 points, leading the team in scoring, along with two rebounds and two steals.

Malik Payton, Florence: In Tuesday’s 58-52 win over Thatcher, the senior led the game in scoring with 23 points and pulled down 11 rebounds for a double-double.

Joshon Person, Apollo: Person, a junior, had one of his best games of the season Tuesday, putting up 20 points, seven rebounds, two assists and a steal despite the 88-83 loss to Liberty.

Dustin Richard, Winslow: Richard, a senior, had a double-double in Tuesday’s 67-49 victory over Holbrook, posting 20 points and 12 rebounds for his best game of the season to date.

Nick Riley, Chandler: Back on the list again this week is Riley for his performance Wednesday against Kofa. The senior recorded a double-double with 24 points and 11 rebounds to help the Wolves coast to an 87-50 victory.

EJ Scroggins, McClintock: The sophomore matched his season high of 23 points and added eight rebounds and an assist in a 74-43 victory over Marcos de Niza on Thursday.

AJ Snow, Liberty: Snow, a senior, helped lift the Lions to an 88-83 victory Tuesday, leading the game in scoring with 23 points. He also had eight rebounds, six assists and two steals.

Pike Tancil, Willow Canyon: Tancil continues to be a driving force for the Wildcats. In Tuesday’s 77-60 victory over Shadow Ridge, the junior had a double-double with 27 points, 11 rebounds, eight assists, a steal and a block.

Nehemiah Washington, Marcos de Niza: In a 61-46 victory over Mingus on Monday, the senior dropped 21 points, three rebounds, three assists and a steal to help the Padres secure the win.

Jaylen Wesley, McClintock: Wesley was the second of two Chargers with a double-double in Tuesday’s 87-77 victory over Thunderbird. The junior led the team in scoring with 25 points while posting 15 rebounds.

JJ White, Ironwood: White continues to have a phenomenal senior season, posting 25 points, four rebounds and four steals to help the Eagles down the North Canyon Rattlers 68-49 on Tuesday.

Jacob Whitsett, Flowing Wells: Whitsett, a junior, had one of his best games of the season, putting up 21 points, three steals and two rebounds despite Flowing Wells’ 68-61 loss to Marana on Tuesday.

Micah Wilkerson-Barrett, Mountain Ridge: Making his first appearance on the list, the junior had an outstanding performance Wednesday against Dobson to help the Mountain Lions get a 79-65 win. He had 23 points, nine rebounds and seven assists.

Albert Wilson, Gilbert Christian: In arguably his best performance of the season so far, the sophomore had a double-double with 26 points, 14 rebounds, two steals, an assist and a block to help Gilbert Christian defeat Globe 65-51.

Brigg Wolfe, Mesa Mountain View: Wolfe, a sophomore, posted 28 points, six rebounds and three steals Tuesday to help the Toros down the Westwood Warriors 69-28. Friday, Wolfe put the team on his back with 26 points and seven rebounds in a 56-41 loss to Perry.