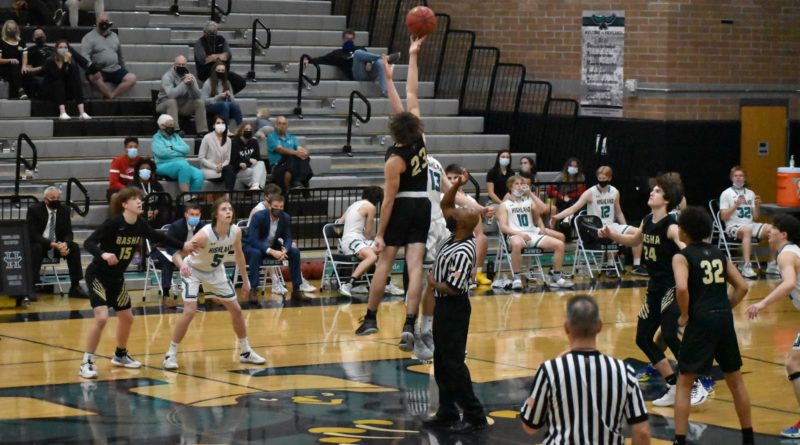 The No. 9 Basha Bears pulled off a 61-52 first-round victory over the No. 8 Highland Hawks on Thursday to survive and advance to the state quarterfinals behind an explosive performance by senior Trenton McLaughlin.

“I talked to our kids before the game, you know, for everything they’ve been through with the ups, downs, the emotions, just leave it all on the floor. Do whatever it takes to be 1-0,” Basha coach Mike Grothaus said.

“It’s a new season. We’ve gone through a tough stretch. They’ve been resilient through that. It’s really just a tough group of kids.”

The victory was a huge confidence boost for the Bears, who struggled a bit to close the regular season after a red-hot start.

“We went through it a little during the end of the season, but we knew if we could get it going, we could make a run at this thing, and it was just good to finally get clicking out there during that game,” McLaughlin said.

Basha jumped out to a 9-1 lead early, but Highland fought back and made it 18-18 after one quarter.

The rhythm the Hawks found to close the first quarter didn’t roll over with them, though, as Basha pulled ahead to start the second period. Defensively, the Bears also started to collapse the lanes, forcing Highland to keep putting up jump shots that weren’t falling.

“Our coaches came out with a great scouting report, so we knew what their strengths and weaknesses were,” McLaughlin said. “We knew their shooters, so we just tried to limit their shot attempts.”

“At the half, the biggest thing that kind of stood out for us was they were shooting at a high clip, and the shots that they did miss we didn’t always clean up defensively, so we really wanted to stress that in the second half,” Highland coach Todd Fazio said.

“We didn’t think they would shoot as well in the second half, and they didn’t, but they got big rebounds late in the game.”

Highland made another strong push to cut away at Basha’s lead, with a crucial shot coming from senior AJ Riggs to make it 37-31. After an intense finish to the third quarter, Basha held a slight 43-39 lead.

McLaughlin has been the team’s leading scorer throughout the season, averaging 21 points per game. Thursday, he put up 25. Senior co-captain Thomas Hastings scored 11, and freshman Christian Warren added eight.

“That was huge for his confidence,” Grothaus said about Warren’s two shots from behind the arc.

For Highland, senior Derick Kaps led the team in scoring with 15, followed by Riggs and junior Mason Knollmiller, who had nine points each.

As the intensity continues to increase, Grothaus will be looking to McLaughlin to shine bright.

“Great players make great plays in great moments, and he is that player,” Grothaus said. “He’s one of the best offensive players in the state and we will rely on him all the way through. He knows that, the team knows that, and he’s just done a tremendous job for us this year.”