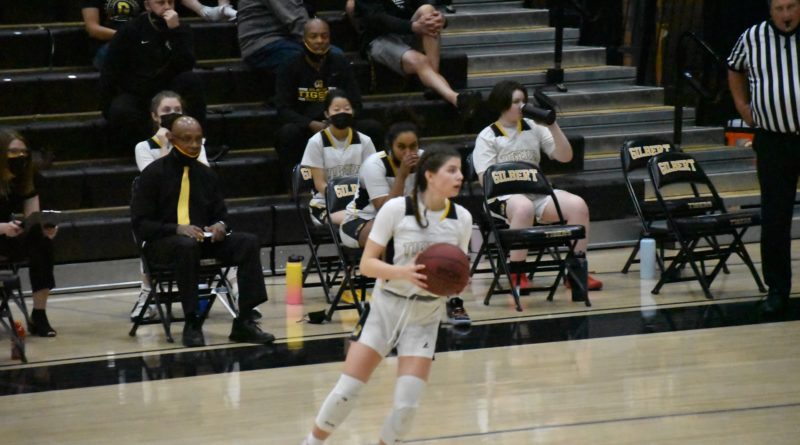 The young but hungry No. 8 Gilbert Tigers rolled to a 41-20 Class 5A girls victory over the No. 9 Sunnyside Blue Devils on Tuesday as the Arizona high school basketball playoffs got underway.

In a defensive battle, Gilbert got the win behind a strong group of underclassmen and an overall team performance.

“When you hold a team to 20 points, I don’t care who you play, that’s impressive,” Gilbert coach Colton Walker said.

Sunnyside was without one of its starters and leading scorers in Andrea De La Fuente, who was injured in last Friday’s game against Flowing Wells. The team put up a good effort in the beginning and trailed 10-6 after one quarter.

Gilbert jumped out to a 14-6 lead about halfway through the second quarter. Junior Annaliese Felix finally ended a nearly nine-minute scoring drought for Sunnyside, which pulled to within 17-14 at halftime.

But the struggles continued for the Blue Devils in the second half when senior Vitoria Perez went down under the hoop with a lower body injury less than 30 seconds into the third quarter. She was helped off the court and could not put weight on her right side, and she was unable to return to the game.

“Losing Andrea De La Fuente, one of our captains, last week to Flowing Wells and losing Vitoria Perez, who didn’t score any points, both of those girls score 30 together, so that definitely hurt us,” Sunnyside coach Justin Delgado said.

The Tigers expanded their lead to 27-17 at the end of three quarters. They closed it out from there to punch their ticket to the quarterfinals, where they’ll face No. 1 Casteel on Friday.

“We did things well — there’s a couple things we didn’t do great, but at the end of the day, all you’re trying to do in the playoffs is win,” Walker said. “It doesn’t matter how it gets done, what happened before, all you’re worried about is the end and the scoreboard.”

For Gilbert, reaching this point in the season has brought its own challenges. Walker was the third coach in three years for the Tigers when he took over the program before the season, making it difficult for the girls to get established and familiar with a certain coaching style and system. He also was depending largely on underclassmen to get the job done on the court.

That’s not even mentioning the disruptions caused by COVID-19. But even with all the obstacles in their way, the Tigers overcame the odds to have a successful season and make a run at the championship.

For the time being, though, they’re focused on the next task at hand.

“We’ve got a group of competitive kids and we’re not going to be satisfied here,” Walker said. “We’ve got a lot of work to do and a big game coming up next.

“At the end of the day, we made it to the Elite Eight, but our business isn’t done. We have to take what we did tonight and go from there.”

Each girl on the team knows she has a job to do. They know where their strengths lie and where their weaknesses are, and they look to their teammates for both assistance and motivation when needed.

For example, while the stat books might not show it, Walker said sophomore Rylee Baird is always out there getting things done to help the Tigers win.

“We definitely all feed off each other,” Baird said. “Some games when I’m not feeling good about anything, they pick me up. It’s just a team effort, honestly.”

Other players, such as junior Nicole Evenson, have stepped into leadership roles as team captains. A three-year varsity player, she has the most experience with high-pressure situations.

“Stepping into the role this year as the captain junior, and the only returning starter from last year, has been a big change, but we’ve adapted really well,” Evenson said. “It’s just taking that leadership role and understanding if I’m not doing it, like Rylee said, you gotta pick it up somewhere else.”

Meisha Caserio has been a huge sparkplug in the starting five as only a freshman, leading the team in points per game.

“It’s kind of just a group effort, but getting into the paint, driving … that’s my game,” Caserio said.

The Tigers know that no matter what happens the rest of the month, they’re going to be loaded next season with a strong and experienced group. They’ve recently implemented something called Ubuntu, which Evenson said isn’t just a word, but a lifestyle.

“Throughout this entire year, since Coach brought it up, it’s about doing something for the greater good. Doing something not for yourself, but for the better of the team,” Evenson said. “We have Ubuntu meetings even — what do you need from me to be better for you?”

The Tigers know their family mentality that derives from their Ubuntu way of life will help them continue to grow closer as a team while their skills continue to blossom on the court.