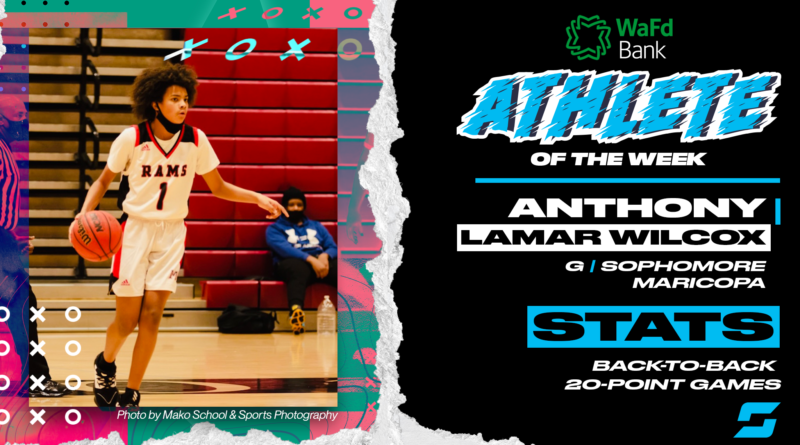 The sophomore had back-to-back 20-point games for the Rams against Dobson (60-49) on Tuesday and Cibola (69-62) on Thursday despite the losses.

Lamar Wilcox received 47.89% of the vote, beating out Buckeye’s Jayson Redhouse who finished second with 34.38%. McClintock’s Jaylen Wesley finished third with 10.65% and Tempe’s KB Hayes finished fourth with 4.09%. There were over 26,000 votes tallied this week!

Dylan Anderson, Perry: In Tuesday’s 59-58 victory over Mountain Pointe, the junior had 22 points to help the Pumas continue climbing in the rankings.

Garrett Anderson, O’Connor: The senior is continuing to be a leader on the court for the Eagles, posting a double-double with 23 points and 10 rebounds in a 68-52 loss to Basha on Tuesday.

Devin Bradford, Vista Grande: In Tuesday’s 74-73 loss to Marcos de Niza, the senior had a double-double with 30 points and 17 rebounds.

Shay Cain, Desert Edge: With 26 points and 12 rebounds, the senior led the team Tuesday in a 66-60 loss to Estrella Foothills.

Andrew Camacho, Peoria: The sophomore led the way against Poston Butte on Monday, tallying 30 points, 11 rebounds, two assists and a block to help lift the Panthers to a 76-57 win over the Broncos.

Alfredo Carbojal, Kofa: The junior had his best game of the season so far, posting 23 points and five rebounds, in Thursday’s 54-51 loss to Yuma.

David Cardenas, Wickenburg: The senior is back on the list this week after a strong game against Parker on Tuesday, when he had 23 points, six assists, five steals and three rebounds to help Wickenburg get a 66-60 victory. Thursday, he posted 23 points, five rebounds, four assists and two steals in a 72-44 win over NFL Yet Academy.

Amari Carraway, Pueblo: As only a sophomore, Carraway is already taking the Tucson basketball scene by storm, making the list once again. In Monday’s game against Cholla, Carraway dropped 24 points, five assists, three rebounds and three steals to help Pueblo get a 63-55 win. On Wednesday, he put up 27 points, four assists and two steals in a 70-46 victory over Combs before dropping 23 points in Thursday’s 70-32 victory over Flowing Wells.

Juan Cervantes, Nogales: In his best game of the season thus far, the senior had 21 points, five rebounds and two steals to help Nogales nab a 69-63 win over Desert View.

Jake Clapper, Desert Edge: The senior had another solid performance to start the week Monday, putting up 20 points, four rebounds and two steals in a 68-48 victory over Bradshaw Mountain.

Jaden De Boer, Valley Christian: With 30 points, the senior led both teams in scoring Tuesday against American Leadership Academy-Gilbert North to help the Trojans win 75-40. He posted 34 points, 21 coming from behind the arc, to help Valley Christian beat Eastmark 75-44 on Friday.

Masai Dean, Cholla: In Thursday’s game against Salpointe Catholic, the sophomore had his best game of the season with 21 points and seven rebounds, despite a 79-46 loss.

Moses Demalek, Paradise Valley: The senior put the team on his back Thursday scoring-wise, posting more than half of the team’s points with 30 in a 74-59 loss to Sunrise Mountain.

Tony Elliott, Desert Mountain: Despite the Wolves’ 75-67 loss to Catalina Foothills on Tuesday, the senior dropped 27 points with five assists.

Coleman Fields, Millennium: In Tuesday’s meeting of last season’s top two 5A teams, the senior had a double-double with 24 points, 12 rebounds, six assists and two steals in the Tigers’ 79-72 loss to Ironwood.

Cohen Gonzales, Mesquite: Gonzales, a sophomore, led both teams in scoring with 21 points to help Mesquite take home a 57-36 victory over Moon Valley on Tuesday night.

Jimari Grayson, Mesa: The senior put up 20 points against Chandler to lead the team in scoring and tallied five assists and four rebounds, helping the Jackrabbits take a 61-45 victory.

KB Hayes, Tempe: Against Marcos de Niza, the junior had 21 points to lead the team in scoring and help lift the Buffaloes to a 62-48 win Thursday.

Andrew Hinkle, Hamilton: It was another explosive week for the senior, but perhaps his biggest performance was in the game against Liberty on Tuesday. With 21 points, six rebounds and five assists, “The Houss” helped lift the Huskies to a 75-51 victory.

Isaac Hymes, Millennium: In only his second game of the season, the sophomore posted 22 points, seven rebounds and three steals in a 69-53 rout of Valley Vista on Wednesday.

Brock Jackson, Sabino: In Monday’s 74-38 victory over Empire, the senior had 20 points and seven rebounds to help Sabino secure the win.

Chris Long, Vista Grande: Along with Bradford, Long also gave it his all on the court in the 74-73 loss to Marcos de Niza on Tuesday. The junior had a double-double with 20 points, 13 rebounds, three assists and three steals.

Isaac Lujan, Combs: In Thursday’s 77-57 victory over San Tan Foothills, the senior had 32 points along with four rebounds, four steals and three assists.

Daryian Matthews, Dysart: In Tuesday’s 70-48 victory over Moon Valley, the senior was controlling the boards, posting a double-double with 19 points and 27 rebounds. He also had four assists and three blocks.

Ahamed Mohamed, Apollo: The junior had another solid week for the Hawks. Against Gilbert on Tuesday, Mohamed led the team in scoring with 20 points, eight rebounds and two assists to help Apollo secure a 59-53 win.

Seve Moreno, Estrella Foothills: Tuesday’s victory over Desert Edge was the best game of the season for Moreno, a junior who posted 23 points and three rebounds in the 66-60 victory. He also led the team in scoring Wednesday with 20 points in a 62-54 win over Buckeye.

Blessing Nwotite, Paradise Honors: Against St. Mary’s on Thursday, the junior led the team in scoring with 22 points, seven rebounds, two assists and a block despite the 78-67 loss.

Preston Olney, Coconino: The senior’s highest-scoring game of the season so far, Olney dropped 27 points and added three rebounds, an assist and a steal to help Coconino get a 70-58 victory over Peoria.

Trevor Owens, Liberty: The junior posted 27 points and two steals to help the Lions tie a school record for points in a varsity game during their 109-63 win over Dobson on Friday.

Garrison Phelps, St. Mary’s: In Thursday’s game against Paradise Honors, the junior led both teams in scoring with 24 points to help the Knights secure a 78-67 win.

Royce Ramos, Rancho Solano: In his third game of the season, the sophomore posted a double-double with 22 points and 11 rebounds, shooting 80 percent from the field, to help Rancho Solano defeat Sequoia Pathway Academy 98-15 on Tuesday.

Jayson Redhouse, Buckeye: Redhouse, a junior, is continuing to heat up just at the perfect point in the season for the Hawks, dropping 25 points, four assists and four steals in Monday’s 71-60 victory over Yuma.

Jacob Rice, Valley Christian: The senior had back-to-back 21-point performances to help the Trojans secure a 75-40 win over ALA-Gilbert North on Tuesday and a 75-44 victory over Eastmark on Friday.

Christian Rodriguez, Tucson: The senior posted 21 points, six rebounds and two assists in a 60-52 loss to Catalina Foothills on Monday.

Stuart Sandall, Page: In Tuesday’s 63-28 victory over Chino Valley, the senior had a double-double with 23 points and 13 rebounds. He added seven blocks.

Nathan Summit, Bradshaw Mountain: While leading both teams in scoring with 27 points, the senior also had 11 rebounds to secure a double-double in a 68-48 loss to Desert Edge on Monday.

Adrian Swearigan, Verrado: The junior put up 22 points, six rebounds, four assists and a steal in his best game of the season Friday to help the Vipers secure a 78-47 victory over Lake Havasu.

Pike Tancil, Willow Canyon: Tancil, a junior, is continuing to thrive this season, opening the week by notching a double-double against Cactus Shadows on Tuesday with 22 points, 12 rebounds and six assists in a 61-59 win. On Wednesday, he had 25 points, seven rebounds and three steals in a 77-63 victory over Canyon View.

Elijah Thomas, Valley Vista: In Friday’s game against Westwood, the senior set a school record with 40 points, hitting eight shots from behind the arc, to help lift the Monsoon to a 92-29 win.

Christian Tucker, Perry: Tucker, a senior, had 21 points and five rebounds to help the Pumas nab a 65-35 win over Queen Creek on Thursday.

Nehemiah Washington, Marcos de Niza: The senior helped lift the Padres to a 53-51 victory over the Cortez Colts on Friday with 22 points and two assists.

Jaylen Wesley, McClintock: In Thursday’s 76-61 victory over Saguaro, the junior had a double-double with 20 points and 10 rebounds, leading his team in both categories.