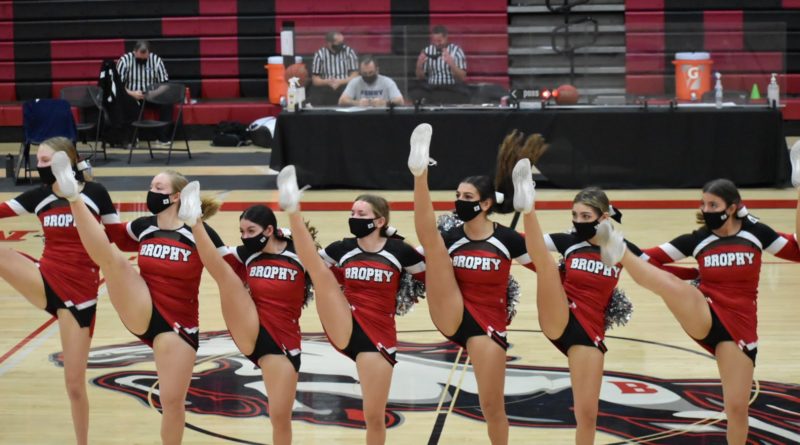 Below is a list of top girls basketball performances for the week of Feb. 22-28. If you know of a player we should add to this list or include in a future week, email brittanyabowyer@gmail.com. Follow her on Twitter at @bbowyer07.

In her second-best game of the season to date, the senior had a double-double with 20 points and 11 rebounds to help Flowing Wells defeat Catalina Foothills 63-36 on Monday.

Leading the game in scoring Thursday against San Tan Foothills, the sophomore put up 27 points, five steals, four rebounds and four assists to help power the Broncos to a 69-25 win.

Another week, another outstanding set of games for the Tucson standout. The senior opened the week with a double-double, posting 34 points and 12 rebounds, to help the Cougars down the Sunnyside Blue Devils 62-42. She followed with 39 points, 10 rebounds and seven steals to help Sahuaro defeat Salpointe Catholic 65-55 on Tuesday. Three consecutive days of play didn’t seem to impact her at all, as she then recorded 30 points, four rebounds and three blocks to help beat Poston Butte 62-15 on Wednesday.

With 28 points and eight steals, the sophomore had another explosive game Wednesday to help Pueblo beat Canyon del Oro 70-42.

The junior was just shy of her season-best performance in Thursday’s 56-45 loss to Barry Goldwater, racking up a double-double with 23 points, 18 rebounds and three steals. She had a whopping 29 points and 31 rebounds, along with eight steals, for nearly a triple-double in a 54-46 loss to El Capitan on Friday.

Putting up her best all-around performance this season Tuesday, the junior had a double-double with 21 points, 10 rebounds, three steals and two assists to help lead Wickenburg to a 49-37 victory over Yuma Catholic.

Dalton, a senior, had back-to-back games with double-doubles this week, opening Monday with 22 points, 10 rebounds and eight steals in a 52-42 loss to Mingus. She followed with 20 points and 10 rebounds against Peoria in a 50-38 loss Tuesday.

A standout three-sport senior athlete, Darwin’s best performance of the season came against Buena on Tuesday. Putting up a double-double with 25 points, 14 rebounds and seven steals, Darwin helped lift the Bobcats to a 58-45 victory.

One of the top seniors in Arizona is continuing to have a successful final season, posting 20 points, six rebounds and three assists in a 60-29 victory over Sandra Day O’Connor on Wednesday.

De La Fuente, a senior, led Tuesday’s game against Cibola in scoring, posting 21 points to help the Blue Devils walk away with a 56-50 victory.

In the best performance of her high school career thus far, the sophomore put up 20 points and six rebounds despite a 45-43 loss to Canyon del Oro on Tuesday.

The senior continues to roll, with her second-best performance of the season coming Friday night. With 32 points, six rebounds, four steals and two assists, Fitzgerald helped the Wildcats notch an 81-15 victory over Marcos de Niza. She posted a double-double Saturday with 22 points and 10 rebounds despite Mesquite’s 53-48 loss to Salpointe Catholic.

After being forced to miss the first half of the season after transferring from Campo Verde, the junior had the best game of her short season so far, exploding for 29 points, four assists and three steals to help the Blackhawks defeat Washington 72-31 on Tuesday.

With another dominant night on the hardwood, the senior’s double-double of 21 points, 20 rebounds and five blocks helped Walden Grove defeat Empire 46-40 on Thursday.

In Friday’s game against Yuma, the senior put up a season-high 31 points along with 11 rebounds and 10 steals, good for an outstanding triple-double and helping the Wolves cruise to a 67-40 victory.

Heath, a junior, took her game to a new level Tuesday against Mingus, posting a season-high 39 points, five steals and four rebounds to help Mohave down Mingus 54-52.

Hunter has emerged as her team’s leader with more phenomenal performances. On Monday, the sophomore had 28 points, four rebounds, four steals and three assists to help the Jackrabbits defeat the Tucson Badgers 64-48. She followed with 31 points, seven rebounds and four steals to help Mesa beat Shadow Ridge 66-43 on Wednesday.

In the junior’s best game of the season, Hurd posted a double-double with 22 points and 11 rebounds to help the Thunder down the Basha Bears 49-38.

Jeong, a senior, led the team in scoring Tuesday with 21 points and added eight rebounds and three steals to help the Rangers beat the Nogales Apaches 55-33.

As Casteel continues to power through the 5A division, Johnson has been a leading factor behind the success. In Friday’s game, the senior had another strong all-around performance with 24 points, seven rebounds, five steals and two assists to help Casteel down Centennial 60-28. In Saturday’s game against Maricopa, Johnson had 28 points, four steals, three rebounds and two assists to help Casteel win 78-21 and remain undefeated.

Johnson became the first player in Westwood history to reach 1,000 career points, reaching the milestone in the first half of Friday’s game against Kofa. The senior finished the night with 26 points, nine assists and seven steals to help the Warriors bring it home on senior night, 88-16.

Kogbara, a sophomore, led the team in scoring and rebounds Thursday despite the 58-48 loss to Buckeye Union. She had a double-double yet again with 22 points and 13 rebounds, nearly making it a triple-double with nine steals, too. Friday, she had another double-double with 20 points and 19 rebounds to help Peoria cruise past Barry Goldwater 54-28.

Martinez, a senior, had two high-scoring games last week, kicking things off Tuesday with 20 points against Sahuarita to help lead Rio Rico to a 55-34 victory before putting up 31 on Wednesday to help secure a 65-41 win over Amphitheater.

In Tuesday’s 81-56 loss to Westwood, the junior led the game in scoring with 20 points while racking up five rebounds.

McNabb, a junior, led Friday’s game against the Saguaro Sabercats in scoring with 24 points. She also had five assists and three steals to help the Sentinels seal the deal, 76-31.

Miller, a sophomore, controlled the boards for Centennial despite the 58-51 loss to Horizon on Tuesday, putting up a double-double with 22 points and 22 rebounds. She also blocked three shots.

Tuesday’s game against Chaparral was Mitchell’s best performance to date. The sophomore had 20 points, four rebounds, three assists and a block to help the Aztecs beat the Firebirds 62-34.

In Friday’s 75-49 rout of St. John Paul II Catholic High School, the senior had a double-double with 30 points and 13 rebounds. She also had five blocks to help the Saints secure the win.

Back on the list once again is Reyes for her performance against Liberty on Tuesday. The senior’s double-double, including 20 points, 14 rebounds and four steals, helped Apollo defeat Liberty 72-38.

In Tuesday’s 55-48 victory over Ironwood, the senior had 27 points and eight rebounds for the Rattlers.

Leading the team in scoring, the junior posted a double-double with 24 points and 21 rebounds to go with six blocks and two steals in Vista Grande’s 50-44 loss to Barry Goldwater on Wednesday.

Making her first appearance on the list, the junior had an absolutely explosive game Friday against Coronado, putting up a season-high 23 points, six rebounds and three steals to help the Spartans defeat the Dons 60-29.

In Wednesday’s 66-43 win over Shadow Ridge, the junior had 24 points, seven assists and five steals to help lift her team to victory.

The small but mighty Leading Edge Academy team has been able to take down some of the larger teams across the valley this season, most recently downing Campo Verde 47-31. Smith, a senior, led the game in scoring with 27 points, seven rebounds and three steals.

In only her fourth game of the season, the junior posted 26 points and 15 rebounds to help Camp Verde defeat Fountain Hills 62-36.

It was back-to-back nights of production for Wattawa, starting with the game against Westwood on Thursday. Despite her team’s 49-36 loss, the senior had a majority of the team’s points with 26, and she notched a double-double with 15 rebounds. In Friday’s 52-44 victory over Corona del Sol, Wattawa had 21 points, six rebounds and two steals.