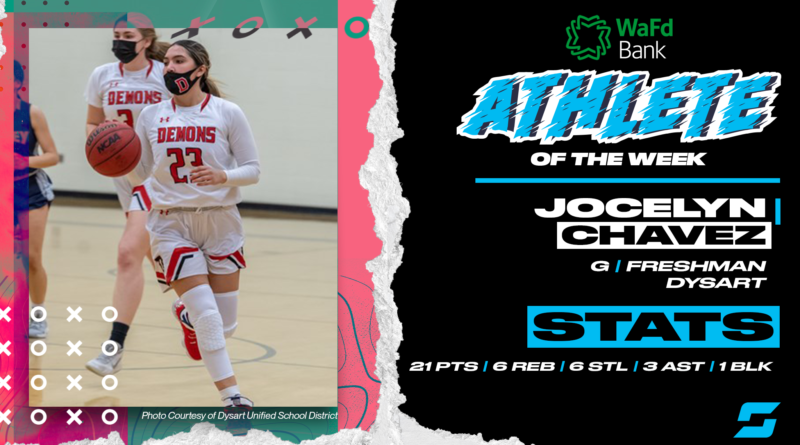 In one of her best performances of the season, the freshman had 21 points, six rebounds, six steals, three assists and a block to help lift the Demons to a 50-40 victory over Yuma.

Chavez received 37.42% of the vote, beating out Casa Grande’s Aliyah Robbins who finished second with 29.51%. Vista Grande’s Jayla Scott finished third with 17.77% and North Canyon’s Sierra Rides finished fourth with 4.07%. There were over 69,000 votes tallied this week!

Adriana Bachman, Poston Butte: Against Vista Grande on Tuesday, the sophomore had a double-double with 19 points, 12 steals, nine rebounds, three assists and eight deflections to help lift the Broncos to a 60-28 victory.

Amanda Barcello, Seton Catholic: The senior had 20 points along with eight rebounds, three steals and two assists in Friday’s 59-41 victory over Millennium.

Meisha Caserio, Gilbert: The freshman was named player of the game Friday against Ironwood after recording 27 points, five steals, three rebounds and two assists in a 55-27 victory.

Tatyanna Clayburne, Williams Field: In her season debut for the Black Hawks, the senior notched her 1,000th career point in a 65-24 rout of Higley on Tuesday. She posted 20 points, seven rebounds, seven steals and two assists.

Emily Davis, Snowflake: In Tuesday’s game against Winslow, the junior had 23 points and 17 rebounds to secure a double-double in a 58-41 win.

Rachel Early, Dobson: The senior scored her 1,000th career point in Friday’s 84-5 victory over Kofa on a breakaway layup. She also helped lift her team to a 63-20 victory over Campo Verde on Wednesday, racking up 21 points, three rebounds and three assists.

Alaya Fitzgerald, Mesquite: In another explosive game, the senior dropped 31 of Mesquite’s 55 points in the Wildcats’ 55-51 win over Perry on Monday. Shooting 92 percent, she also had seven assists, six rebounds, six steals and three blocks.

Trinity Flores, Williams Field: Another transfer to Williams Field’s program, the junior showed how she can provide an immediate boost on the court when she had 22 points and six steals in Tuesday’s 65-24 rout of Higley.

Rachel Grapevine, Coronado: The senior posted a double-double with 22 points, 10 rebounds and eight steals in a 47-42 loss to Cortez on Tuesday.

Kamariah Hawkins, Yuma: Hawkins had a season-best performance Tuesday in Yuma’s 58-25 victory over San Luis. The sophomore had a triple-double with 27 points, 18 rebounds and 10 steals. She added two assists and three blocks.

Alyssa Heath, Mohave: In Thursday’s 39-29 victory over St. Mary’s, the junior had 19 points and eight rebounds.

A’nya Hunter, Buckeye: It was another outstanding week for the senior, who had three consecutive games with a double-double. On Tuesday, she had 30 points and 34 rebounds … you read that right, 34 rebounds … in a 64-59 loss to Youngker. On Thursday, she tallied 12 points and 11 rebounds in a 47-35 victory over Desert Edge before posting 21 points and 12 rebounds in a 50-44 loss to ALA-Queen Creek on Friday.

Clarissa Lopez, Youngker: The senior had another outstanding game with 28 points, eight steals, seven rebounds and three assists in a 64-59 victory over Buckeye on Tuesday.

Jaya Nelson, Salpointe Catholic: In Tuesday’s 66-20 rout of Cienega, the senior had 24 points, seven rebounds and three steals to help the Lancers get the win.

Vitoria Perez, Sunnyside: On Wednesday, the senior had 22 points, six rebounds, an assist and a steal in a 69-58 victory over Tucson.

Madison Pond, Estrella Foothills: In the best game of her high school career to date, the freshman posted a double-double with 17 points and 14 rebounds, along with an assist and a steal, in a 57-49 victory over Dysart on Tuesday.

Madison Reibel, Canyon View: In Thursday’s 60-59 victory over Centennial, the freshman had a phenomenal game with 25 points, six steals and five rebounds.

Reyna Reyes, Apollo: Making her first appearance on the list, Reyes, a senior, had a double-double with 21 points and 12 rebounds, along with five steals, two assists and a block, in a 56-29 win over Gila Ridge on Tuesday.

Aniyah Riddell, Mountain Pointe: The freshman had the most explosive game of her high school career thus far Tuesday against Corona del Sol, setting her up to have a huge week. After putting up a double-double in the 62-31 victory with 28 points, 13 rebounds, two steals and a block, she then posted 16 points and 12 rebounds Thursday in a 48-43 overtime loss to Cibola. She had 20 points and 13 rebounds in a 53-38 loss to Mesa on Friday.

Sierra Rides, North Canyon: The senior posted 21 points, four rebounds and four assists in a 60-57 loss to Independence on Tuesday.

Aliyah Robbins, Casa Grande: Making her first appearance on the list, the junior posted a double-double with 19 points and 12 rebounds in a 56-32 victory over Canyon del Oro on Monday. She also had a steal and two blocks.

Graciela Roybal, Hamilton: The senior had another explosive week for the Huskies. In Tuesday’s 66-47 win over Xavier Prep, Roybal had a game-high 24 points and two steals before posting 21 points, four rebounds, an assist and a steal in a 59-44 win over Mesa on Thursday.

Fanta Sackor, Paradise Valley: The sophomore scored more than half of Paradise Valley’s points in the Trojans’ 36-20 win over Shadow Mountain on Friday, posting 19 points, seven steals and six rebounds.

Jayla Scott, Vista Grande: In Wednesday’s 60-35 loss to Pueblo, the junior had a double-double with 19 points and 12 rebounds, along with two blocked shots.

Haylee Weathersby, Apollo: Back on the list once again is Weathersby, this time for her performance in a game against Cactus Shadows on Wednesday. The senior had 21 points, nine assists and four steals in a 48-46 loss.

Nakyah Williams, Paradise Honors: The freshman had an outstanding performance Wednesday, notching a double-double with 19 points, 10 steals, nine rebounds and seven assists in a 70-49 victory over Peoria.